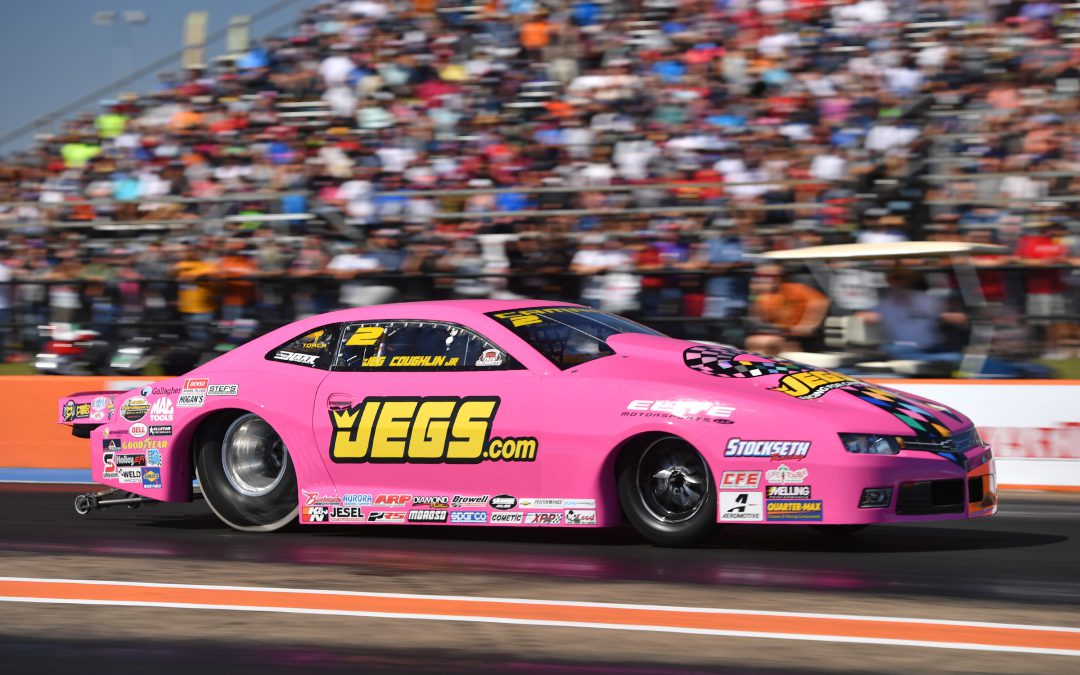 ENNIS, Texas (Oct. 19) — The Texas heat kept elapsed times in check Saturday at the 34th annual AAA Texas NHRA Fall Nationals, allowing five-time Pro Stock champ Jeg Coughlin Jr. to collect his second low qualifier award of the year. It's the 31st time Coughlin has led the category into race day and the second year in a row he's done so in Dallas.

Coughlin's run-of-record came Friday evening when he clicked the timers in 6.509 seconds at 210.41 mph. Today's two runs produced a 6.550 at 210.31 mph and a 6.574 at 208.10 mph. Overall this weekend, Coughlin's JEGS.com Elite Motorsports Chevrolet Camaro was the quickest in three of four qualifying rounds and the second-quickest in the other.

"I feel really confident about the whole program right now," Coughlin said. "It's great to run well when it's cooler like it was last night and even better to come out today when it was substantially warmer and still lead one session and almost lead them both, It's a real feather in the cap for crew chief Rickie Jones and the rest of the JEGS crew.

"It was kinda warm when we woke up and the temperatures just crept up from there. It gave the brain-trust a chance to work on stuff for tomorrow because, with the exception of Round 1, I'd imagine we're in for the same sort of conditions as we had today."

Coughlin will open eliminations against Richie Stevens, who nudged his way into the 16-car field with a 6.648 at 209.14 mph. A veteran driver, Stevens is making his first start of the year at this event.

"We're looking to win this race and Richie is the first guy we face so he's our focus right now," Coughlin said. "Hopefully we can put on a great show for these awesome Texas fans. There were a bunch out here today and I would bet they'll fill the Texas Motorplex again tomorrow. It felt great to run up front these last two days. We'll try to keep this momentum going."

Also running out of the JEGS.com camp this weekend is Troy Coughlin Jr., Jeg Jr.'s nephew. The newly-crowned East Region Top Alcohol Dragster champion was hoping for a sixth victory on the year this weekend, which would have placed him second in the national points, but he was tripped up in Round 2 and will have to settle for third overall.

"No regrets at all," Troy Jr. said. "We've had two absolutely wonderful seasons, both of which ended in regional championships, and we've won a bunch of national and divisional races along the way. Best of all, I'm racing with the premier team in the NHRA and I continue to feel like the luckiest guy in the pits."

"I told Monroe I saw him leave on me and I spent the rest of the run looking for the nitrous button," Troy Jr. said. "He got a good laugh out of that one. He was pretty pumped up beating us and that's a big complement to our team."