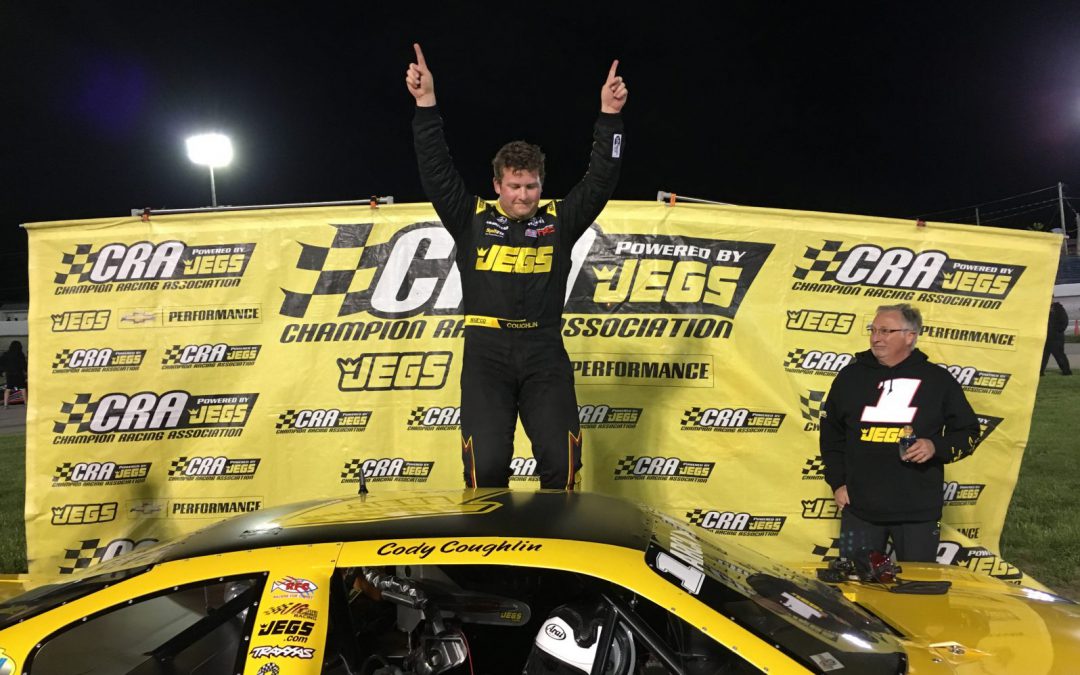 Cody Coughlin is about to begin one of the busiest weeks of his racing career.  Four races in seven days.  That’s something a dirt driver would do.  Coincidentally, the Joe Gibbs Racing Development driver will be hitting the dirt for one of those races, but first, it all begins at Indiana’s bullring of Anderson Speedway for the Redbud 300 on Saturday, July 16.  Ironically, the busy week will end at Anderson a week later for the 100-lap JEGS/CRA All-Stars Tour event on July 23.

In between the two races at Anderson is the NASCAR Camping World Truck Series Aspen Dental Eldora Dirt Derby at Ohio’s Eldora Speedway on Wednesday, July 20, and the ARCA/CRA Super Series 100 at Lucas Oil Raceway in Indianapolis on Friday, July 22.

“This is going to be crazy, but also a ton of fun,” said the 20 year-old Coughlin.  “I’ve never done anything like this with so many races in such a short period of time.  I’ve also never raced on dirt before, so that race at Eldora is going to be interesting, but I’m looking forward to it.”

The first is the 50th annual Redbud 300 at Anderson where Coughlin won a 100-lap Super Series race on Mother’s Day weekend.  Coughlin has made one prior start in the Redbud 300.  He finished 20th in the 2013 edition after being caught up in an early crash.

“Anderson wasn’t one of my best tracks, but after our win there in May I feel that we can go in there and do it again on Saturday night in the Redbud,” Coughlin said.  “300 laps is a long time on a quarter-mile, but I know that my guys will keep me patient in that one and we’ll be right there contending for the win.”

The second race of the week is the NASCAR Truck race at Eldora where the Ohio native will climb back behind the wheel of the No. 51 Kyle Busch Motorsports Toyota Tundra.

“The Eldora race is one of the biggest truck races of the year, so it’s going to be really cool to be a part of that,” he said.  “It’s going to be extremely challenging.  It’s unlike anything I’ve ever done, but I’m just looking to have fun and do the best I can for the KBM guys.”

The third race of the week is back in the Super Late Model at Lucas Oil Raceway in Indianapolis, the site of one of Coughlin’s best runs of 2015 when he charged from 20th to third in the second half of the race.

“I love Lucas Oil Raceway,” Coughlin said.  “It’s a great track and a place I love racing at.  My dad and entire family has a lot of history at that facility on the drag racing side of things, so I’d love to add to that history on the oval track.”

Finally, Coughlin will end the week at the same place it started with a 100-lap Pro Late Model race at Anderson Speedway.

“Thankfully, I have two awesome teams that are going to do their best to give me a chance to have strong runs and hopefully win some races,” Coughlin said.  “I’m really looking forward to another run with Bono and the KBM guys.  I’m also really looking forward to my three Late Model races with my guys.  Jack (Smith, crew chief) has really made a difference for me this year.  Jack, Kevin (Hamlin, team manager), Scott (Wimmer, spotter), and Dave (Holt, crew member) have worked so hard this year and I can’t thank them enough.

“I also can’t thank my parents, Di and John, and my sister Kennedi enough for their continued love and support.  I’m extremely blessed to have such a wonderful family that follows me as I pursue my career.”