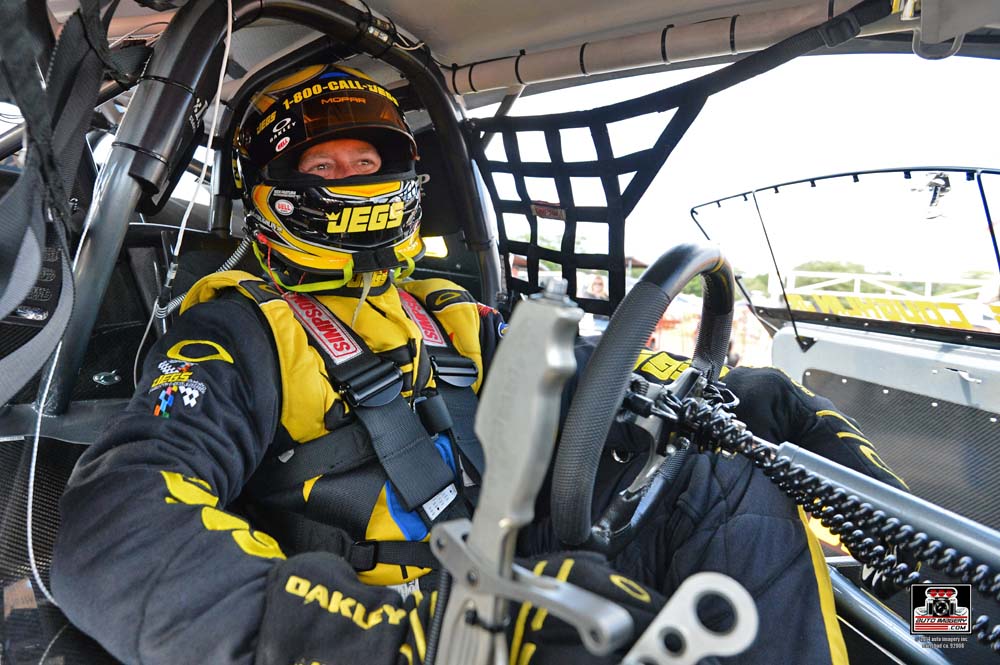 "Two days in the books here in Brainerd International Raceway and we've found ourselves to have a very consistent racecar, which is always a good thing," Coughlin said. "The air wasn't as good today as it was Friday so we didn't see big improvements but we were working on fine-tuning things for game day tomorrow.

"I expect we'll pick up. We'll go over the data and zero in on a tune-up that should agree with the slightly cooler temperatures and better atmospheric conditions we're forecasted to have Sunday. We'll see if Mother Nature will take some of this thickness and moisture out of the air."

The reigning world champion won here in 1999, 2002, 2007 and 2010 so he already knows his way to BIR's winner's circle. But he also knows past history won't help him get through this field so he plans to bear down and drive the wheels off his JEGS.com/Mopar Dodge Dart, beginning with his first-round match-up against No. 12 qualifier Larry Morgan, who posted a best pass of 6.723 seconds at 206.32 mph.

"Sunday is the fun day," the 58-time national event winner said. "That's when you want to shine the brightest. We've had great success here and that makes us feel good. This place has been exceptionally kind to us over the years, no doubt. Still, each race day brings its own challenges and past success don't really mean much. We'll need to be sharp all day to turn on win lights."

Coughlin already has two victories in five final-round appearances this season and has been near the top of the standings since his title defense began. With just two races left before the Countdown to the Championship begins on Sept. 12-14 in Concord, N.C., the five-time world champ is in search of some momentum for the final stretch of the year.

"We're looking for big things tomorrow," Coughlin said. "If we can get some round wins early and get into those later rounds then I think we could walk away with another trophy. That's certainly the game plan for us."

Qualifying action from BIR will air at 10 p.m. CT, Saturday, on ESPN2. Pro Stock eliminations begin at noon, Sunday, with ESPN2 airing all the action in tape-delay beginning at 8 p.m. CT.