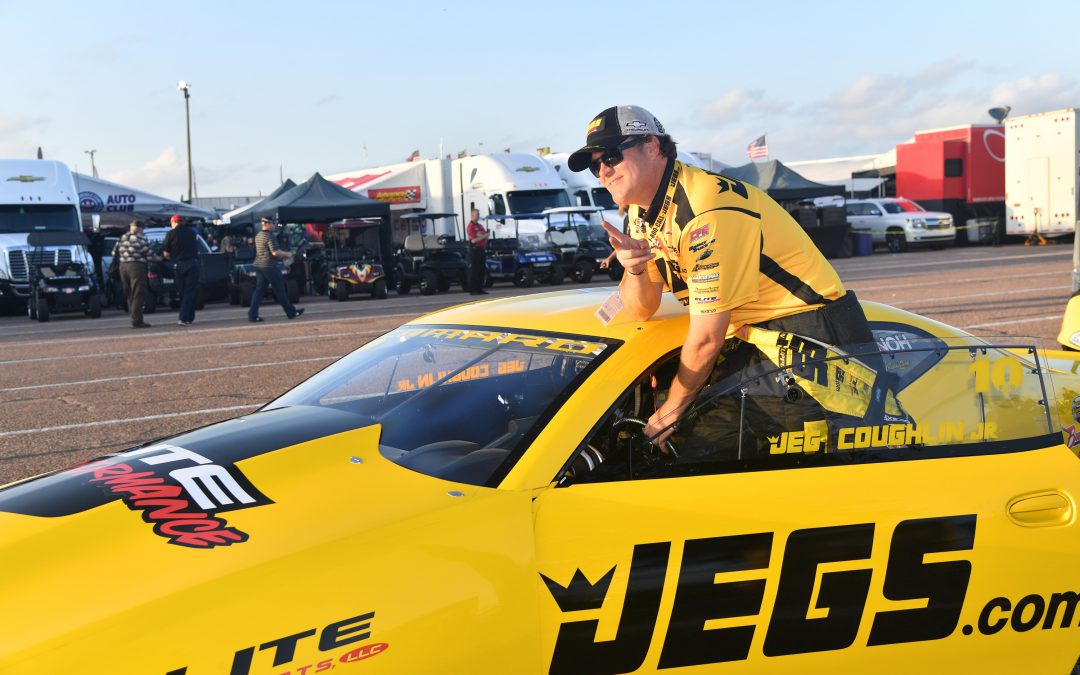 CONCORD, N.C. (April 26) — When racing impresario Bruton Smith decided to make zMax Dragway a four-lane drag racing facility, only the old-timers knew what he was talking about. For most modern-day straight-liners, it seemed a crazy novelty, but one that was certainly intriguing, especially for the racers themselves.

Now, with the eighth annual NHRA Four-Wide Nationals just a few days away, six-time world champion Jeg Coughlin Jr. took a few moments to reminisce on the unique format that pits four cars burning down the quarter-mile strip at one time.

"As a kid, before this track was built, I remember rummaging through my dad’s old racing scrapbooks that my mom put together through the years," Coughlin said. "I came across some photos and stories about some four-wide racing they did up in northern Ohio at Dragway 42 and I had to ask him, 'what the heck is that?'

"In my lifetime, for as long as I can remember, including the times me and my brothers would accompany Dad to the drags back when he was racing, the sport has always been contested in two lanes. It always two cars, line 'em up, and let 'er rip.

"Then Bruton came up with zMax Dragway and decided to bring it all back to life. I think it's awesome. I love it for the challenge and for the salute to days gone by. What's old is new again, and it's a lot of fun for us and the fans."

Of Coughlin's 58 Pro Stock victories, none have come under the four-wide format, but that hasn't dampened his spirits coming into this event, especially after qualifying his JEGS.com/Elite Performance Chevrolet Camaro on the pole last weekend in Houston and racing to his 43rd runner-up finish.

"Four-wide is a fun format and I'd love to take the win this weekend," he said. "You talk about max overload when you’ve got four Top Fuel dragsters or Funny Cars taking off the line at the same time, and it's still pretty cool with four Pro Stock cars doing it as well. It’s a sight. A lot of stuff is going on in a short amount of time. As a driver, everything feels like it’s happening quicker than ever before going down the track with three other cars to think about.

"Personally, I can’t wait to get back behind the wheel. This JEGS.com Chevy is really running on mean right now and I feel great behind the wheel. We had just a minor miscue there in the Houston final in a couple of areas but we will look to rebound well here this weekend and take things all the way."

Aside from racing in Pro Stock, Coughlin will double his chances to win as he continues to race his JEGS.com Corvette roadster in Super Gas. Coughlin has raced the car at every national event this year.