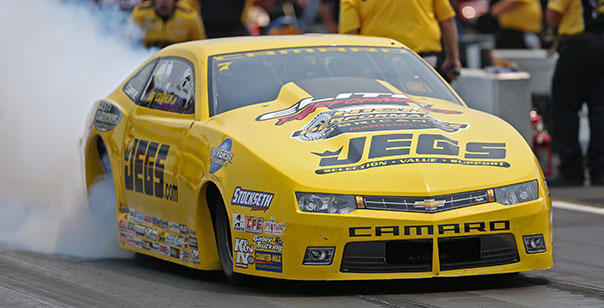 KENT, Wash. (July 31) — Jeg Coughlin Jr. already enjoyed one winning streak in early June when he won consecutive national events in Chicago, Richmond and Bristol. Now he's hoping to close out summer with another winning streak as he arrives at the 31st annual CatSpot Organic Cat Litter NHRA Northwest Nationals fresh off a big victory in Sonoma. And with two chances to score in Seattle, his expectations are high.

"We're feeling great," Coughlin said. "The Pro Stock car ran extremely well in Sonoma with a brand-new Elite Performance engine under the hood and the Stock car has been extremely consistent ever since we put it on the track a few years ago. We feel very good about our chances in both categories.

"What's exciting about this updated motor is that, even though we figured it out pretty quickly in Sonoma and got the win there, it's showing us there is plenty of room to get even more efficient and quicker so we'll continue to work on this tune-up."

"Typically, we get the same sort of air conditions only with a different track surface in Seattle," Coughlin said. "Obviously, the engine was happy in Sonoma so we'll dig through the data we've gathered since Pacific Raceways was resurfaced and come up with a game plan that will give us an advantage again this weekend.

"This is always a fun race. You get all the fans from Washington, Oregon, Idaho and such, plus a bunch of Canadians making the trek from Vancouver and the rest of Western Canada and they are super pumped to see us perform. We'll certainly do our best to put on another good show for them."

Heading into the three-race Western Swing of consecutive events in Denver, Sonoma and Seattle, Coughlin had a goal of working his way into the top five of the Mello Yello championship points. His win in Sonoma accomplished that objective a race early so he's looking even further up the rankings now.

"We're pleased to be in the top five for sure," he said. "And we're closing in on fourth-place. But we also could have a poor outing and drop back a few spots so we need to stay vigilant and continue to work hard. There's only three races left before the playoffs and we want to move up as high as we can before they reset the points."