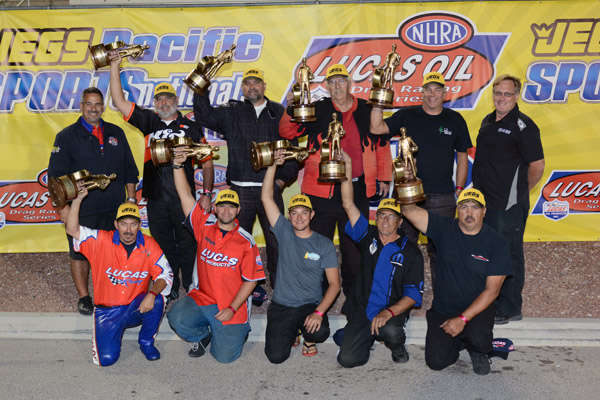 Giroux, of Canyon Creek, Alta., qualified in the No. 14 spot in his B/AA Cavalier and drove to the final round where he defeated the I/SMA Chevy of Randy Jones, who was making his second final round appearance at the JEGS Pacific SPORTSnationals in the last four years.

Lynch, the 1982-83 NHRA Super Stock world champion, won his sixth NHRA national event title by driving his 2010 Drag Pak Challenger past Larry Scarth’s Chevy S-10 in the final round. Lynch slowed to a 10.29 from his 9.96 dial-in but turned on the win light after Scarth broke out by running nine-thousandths under his dial-in.

Brand raised his record to a perfect 2-0 in national event final round after defeating Mark Faul in the Stock final. Driving his G/SA Firebird, Brand won after Faul, who was appearing in his six final at a JEGS SPORTSnationals race, red-lighted.

Fischle won the Super Comp final with a 9.06 on the 9.05 altitude adjusted index following a 9.02 breakout by opponent Craig Blaisdell. The Super Gas final round was decided in a similar manner as McClelland, the son of Hall of Fame announcer Dave McClelland, drove his ’27-Ford to a 10.05 to defeat Pete Bothe, who broke out with a 10.04.

Alguire, a regular in the Las Vegas E.T. bracket racing program in his vintage ’68 Barracuda, won the Super Street final with an 11.04 to 10.96 double-breakout race against John Parrino’s ’69 Mustang.

Top Dragster champion Koenen was almost perfect in the final round as he defeated Thomas Bayer using a .005 reaction time and a 7.165 on his 7.15 dial. Bayer, a multi-time Division 7 champion drove to a runner-up after carding a 7.563 on his 7.52 dial.

The Top Sportsman final went to Hymas, who drove his ’69 Camaro to a 7.09 on his 7.06 dial for the holeshot win over Ed Olpin, who gave up a slight advantage on the starting line and could not make up the difference with a 7.43 on his 7.41 dial.