Glory at Four-Wide NHRA Nationals will have to wait for Jeg Coughlin Jr. 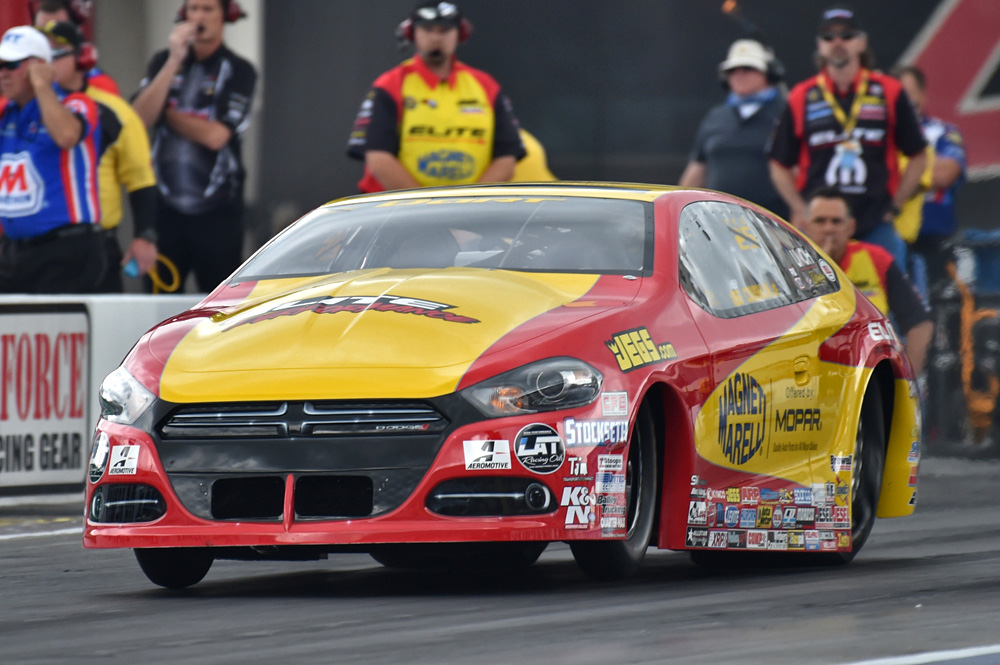 CHARLOTTE (April 24) — After qualifying 12th at this weekend's seventh annual NHRA Four-Wide Nationals presented by Lowes Foods, five-time world champion Jeg Coughlin Jr. knew he needed to squeeze everything he could out of his Magneti Marelli offered by Mopar/JEGS.com Dodge Dart to have a chance at advancing.

Unfortunately this time he squeezed a little too hard, fouling out at the starting line in his Round 1 race against Bo Butner, Deric Kramer and Shane Gray. Coughlin's -.006 red-light start negated his pass on the launch pad.

"It's been a rough four-wide," Coughlin said. "And I'm surprised by that because the team came out of Vegas and had a great couple of weeks on the dyno. Plus, testing was done last week in Oklahoma and that went well. It just didn't happen for us once we got here.

"On the encouraging side of things, Erica (Enders, teammate) just made the best pass of the race as far as our Dodge Darts go and our two Chevys on the other side of the Elite Motorsports pit are looking better and better so progress is being made. Unfortunately, I was a little aggressive on the starting line today and went red. We changed some things to pep this thing up and I probably should have backed off on my reaction time a bit today."

Coughlin, a 58-time winner in the Pro Stock category, won't have long to wait until he gets back in his racecar as the Springnationals at Houston's Royal Purple Raceway  begin Friday.

"We're holding our heads high and we have complete faith in the team," Coughlin said. "We're doing all we can to support the guys and we all expect things to fall into place very soon. We thought it would be here but that didn't happen so we'll head to Houston in a few days and try again. We are on the cusp.

"We've been fortunate enough to have had great success in Houston over the years and we'll be racing with our friends Stan and Sheila Holt of Lupe Tortilla Mexican Restaurant fame so that will make for some great times. I do know we'll be fed well, for sure."