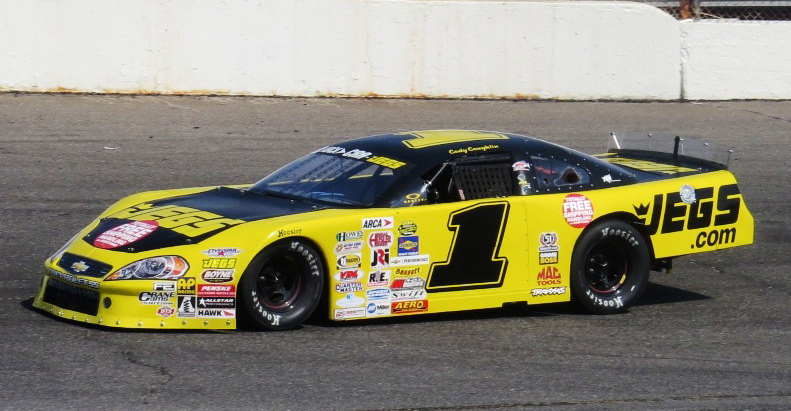 On Friday, the team returned to Auto City Speedway in Clio, Michigan, where a week earlier, Coughlin finished second in the JEGS/CRA All-Stars Tour event, where he is the current point leader.

Coughlin appeared to be heading towards another podium finish until he was involved in a late-race spin while battling for the second position.  He would come back to finish seventh in his second-ever Super Late Model start.

“We had a real good car and thought we could contest for the win in the late stages of the race,” Coughlin said. “But we were in a fierce battle for the second spot and got involved in a spin.  We tried to get back up and contest for the win, but ran out of laps.”

On Saturday morning, the team decided to make the short 100-mile trek south to Flat Rock Speedway in Flat Rock, Michigan and compete in his third CRA Super Series event.

This gave the team a unique opportunity to do something that many competitors in short track racing have done for decades. That is, race at one track one night, load up and head to another track to compete the following night.

“Our team discussed what we would have to do in order to get ready for Flat Rock. We all decided to put in our best efforts and see if we can have a good run,” Coughlin said. “It was a great opportunity for the team to grow as a whole.”

This was the first time that Coughlin has competed at Flat Rock Speedway.

“Flat Rock Speedway is a tough, fast quarter-mile oval. It is more of a position track where it is tough to pass cars,” Coughlin explained. “This was a very competitive field and most of us were within three-tenths of a second in qualifying.”

With a tight field on a tight track, Coughlin was able to bring his JEGS Chevrolet SS home in one piece with a 13th place finish.

“We really have nothing to hang our head over,” Coughlin said. “We were only 0.242 seconds behind the fast qualifier and we were competitive. As a team we learned what to do next time race at Flat Rock Speedway.”

“What I know is that I can drive and have faith in our team and we will be better next time,” Coughlin said.
“God has given us all special talents to use and we will use the talents to be stronger down the road.”

Cody also enjoyed meeting the fans who came out to support him at both tracks and really appreciates the motivational comments received at their @TeamJEGS Twitter account.

“The fans really kept us upbeat throughout the weekend, their support is awesome,” Coughlin said. “I also have to thank my parents John and Di, my sister Kennedi for their support.

“Also a special thank you to everyone at JEGS for their continued support throughout the year. I am looking forward to the upcoming events on my schedule and hopefully win the JEGS/CRA All-Stars Tour championship.”

Coughlin's next event comes with the JEGS/CRA All-Stars Tour on September 1 at the high-banked Winchester Speedway in Winchester, Indiana.