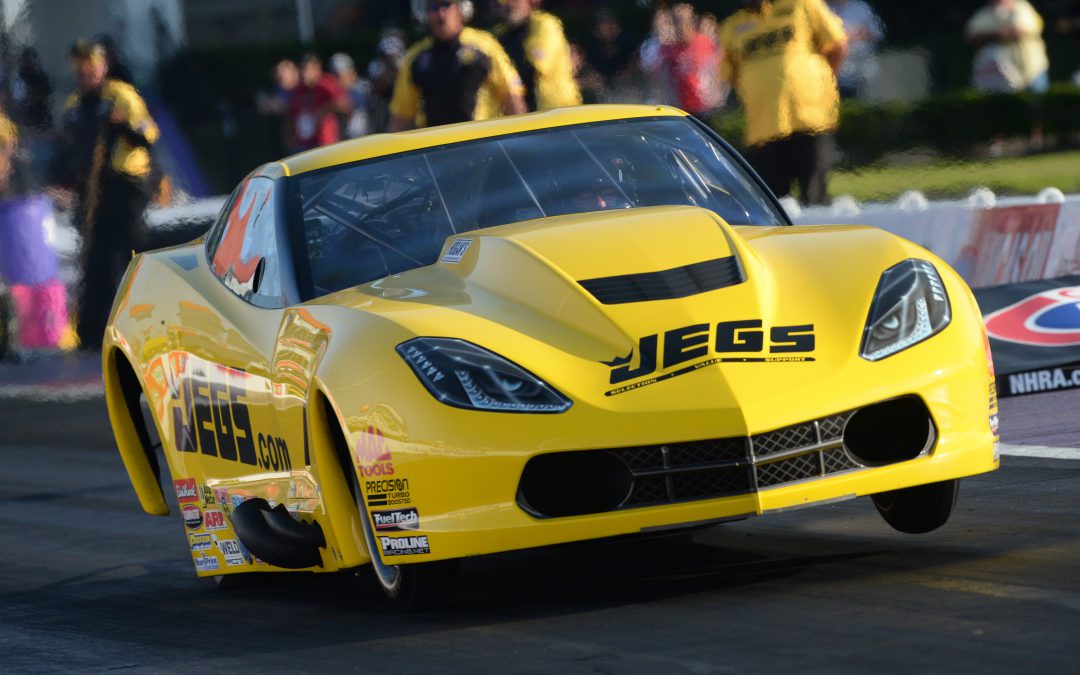 HOUSTON (April 23) — Feeling he needed something special to beat second-round opponent Jonathan Gray, who runs a supercharged Pro Mod racecar, Troy Coughlin and his JEGS.com race crew pushed the performance envelope a little too far Sunday and lost traction, eventually losing by a wide margin in the second round of the 30th annual NHRA Spring Nationals.

This past offseason, NHRA officials changed the rules for supercharged and nitrous-assisted Pro Mod cars, instantly making all of the cars using both types of power-adders quicker and faster. Unfortunately for Coughlin, nothing changed for the turbo-charged cars like the Corvette he drives.

"We got a little too aggressive with it because we kind of felt like we had to," Coughlin said. "The rule changes have left the turbo-charged cars behind. We're trying extra hard to get after it and we went too far today. We just need to get a little more consistent with our tune-up, I guess.

"Getting the NHRA to look at the changes they made will probably never happen because the guys paying for and running this series all run super-charged cars. It doesn't seem right but that's how I feel about it."

After running a 5.789 at 251.77 mph in a Saturday night defeat of Khalid alBalooshi in Round 1, Coughlin couldn't match that efficiency in Sunday's hotter conditions. Not long after letting out the clutch, his powerful racecar started swaying back and forth, forcing him to shutoff and coast down the strip. Gray, meanwhile, zipped to a 5.801 at 250.04 mph.

Fortunately for Coughlin, he won't have long to contemplate what could have been in Texas as the tour quickly moves to Charlotte for next weekend's eighth annual NHRA Four-Wide Nationals at zMax Dragway.

"It's going to be really cool to have Pro Mods as part of the big show there in Charlotte," Coughlin said. "It'll be the first time we race four-wide and I think it's going to be really cool. They're giving us four qualifying sessions, instead of the usual three, and we'll run alongside the Mello Yello Series on Sunday. I'm really pumped up about next weekend. To have four of these Pro Mod beasts lined up at once will be awesome."