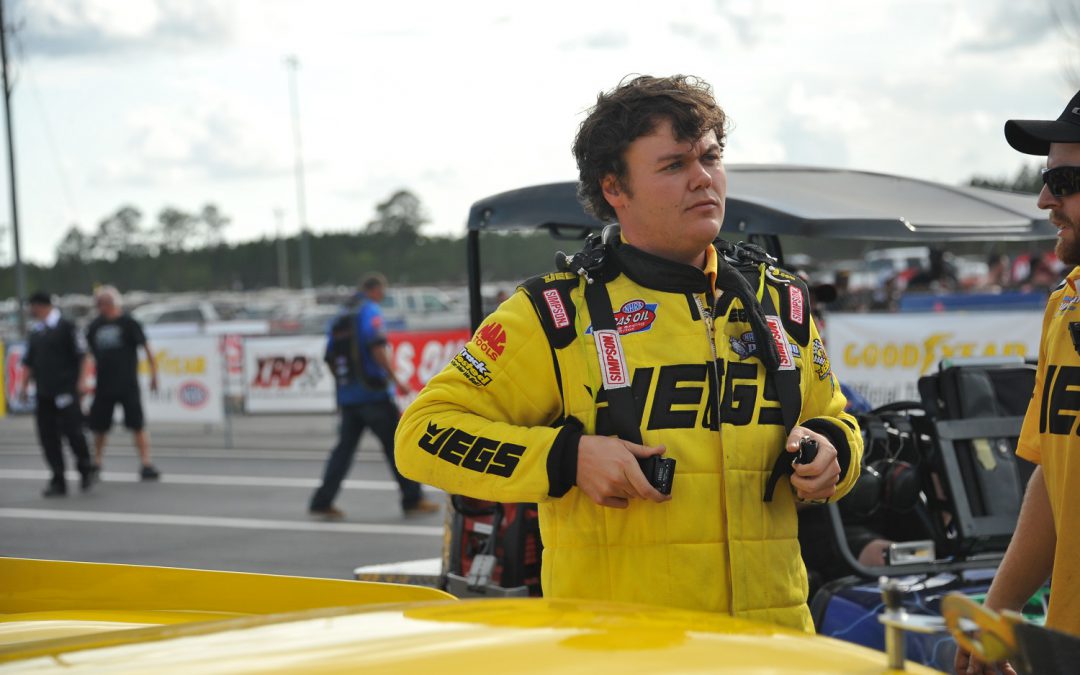 BAYTOWN, Texas — In his first experience in the NHRA J&A Service Pro Mod Drag Racing Series, rookie Troy Coughlin Jr. made an immediate impression, advancing to the semifinals at his series debut in Gainesville.

The southeast Texas stop for the NHRA J&A Service Pro Mod Drag Racing Series, which is presented by The Real Pro Mod (RPM) Association, is the second of 10 races in the 2015 season and also serves as the second opportunity for Coughlin to experience the extreme adrenaline rush the class provides.

"It was a pretty wild experience,” Coughlin said of his debut at the famed NHRA Gatornationals in Florida. “The attention you get from the fans is a lot more than I've ever been through and even the media stuff was ramped up. I'll tell you, watching my dad (Pro Mod driver Troy Coughlin) is one thing, but when you're the guy, it's kind of a neat feeling. I'm kind of quiet so it's taking some getting used to being more outgoing with folks. But it's been fun.

"The back-and-forth you have with the entire team is intense. The guys have been great, very patient, and I'm up for the challenge. I’m having a blast."

Coughlin Jr. fell to Gainesville runner-up Pete Farber when his JEGS.com Chevrolet Corvette did not start for the semifinal round, but it was still a thoroughly positive experience for the 24-year-old driver who got his start in the sport in the NHRA Lucas Oil Series. His father fell in the other semifinal to eventual winner Bob Rahaim, meaning it was a solid start to 2015 for the Coughlin family.

"I think it's definitely an advantage to have grown up around my dad, uncles and grandfather,” Coughlin said. “I've seen a lot of things happen right in front of me and I've also had the benefit of seeing how they each handle certain challenges. You tend to soak in all the good things and try to be like them when it happens to you.”

That has been reflected in Coughlin’s approach since Gainesville. The class had more than a month off between races, but Coughlin said he has been hard at work in a variety of ways.

"I've remained very focused on my fitness and training to continue to be in the best shape I can be,” Coughlin said. “We have a practice tree and I try to wear that thing out to stay sharp. I've watched a lot of video from Gainesville and testing and we've done a little on-track testing as well. There is no ceiling on how much racing knowledge you can have."

Coughlin will need all of it in Houston going against a loaded field that starts with Gainesville winner Rahaim. Others to watch in the class include Rickie Smith, who has won the past two world championships in the class, Farber, Danny Rowe, Don Walsh, Mike Castellana, Bill Glidden and Mike Janis, who won a year ago in Houston. But facing off against a talented field that includes 28 entries in Houston, Coughlin Jr. knows there are plenty of areas where he can improve in his young career.

"I need to be more consistent,” Coughlin said. “I want to understand how every little thing on this car works so I can answer every question the crew might have for me. There's a lot going on with the car when you're staging and I need to get more comfortable with all of that so I can focus on the tree better. Pro Mod has a really deep field of super talented racers. Every round is so intense."

Featuring the world’s fastest and most unique doorslammer race cars, the NHRA J&A Service Pro Mod Drag Racing Series offers something for every kind of hot-rodding enthusiast. The growing class is highlighted by historic muscle cars, like ’67 Mustangs, ’68 Firebirds and ’69 Camaros, as well as a variety of late model American muscle cars. With more than 3,000 horsepower, the suspended door pro mod cars travel the quarter-mile in less than six seconds at speeds exceeding 250 mph.

To purchase general-admission or reserved seats, log on to www.RoyalPurpleRaceway.com or call Royal Purple Raceway, (281) 383-7223. Tickets for children 13 and younger are free on spectator side with any paid adult ticket. For more information about NHRA, log on to www.NHRA.com.