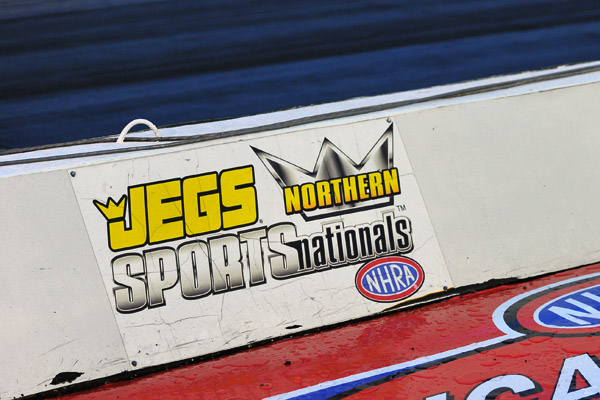 Among the early qualifying leaders is Jason Coan of Kokomo, Ind., a former winner of the JEGS Northern SPORTSnationals and a champion of the recent Chevrolet Performance U.S. Nationals in Indianapolis. Coan drove his ’32 Bantam roadster to a run of 8.167-seconds to lead the field in the Comp Eliminator class. Coan is followed by Greg Kamplain, one of the leading contenders for the Comp Eliminator world championship. With one national event remaining in which he can earn points, Kamplain can take over the top spot in the class with a win or a runner-up finish. Ohio racers John Frech or Cortland and Rick Brown of Lebanon are ranked third and fourth respectively after the opening qualifying rounds.

Ford Cobra Jet Mustangs dominate the top of the qualifying charts in Super Stock as four of the top five spots are occupied by the new factory-built race cars. Ronald Matcham of Grafton, Ohio drove his ’12 Cobra Jet to a 9.012 elapsed time for the provisional No. 1 spot. Second on the chart is the ’89 Chevrolet Camaro of Jeff Niceswanger, while fellow Cobra Jet racers Rick Rodgers, Mike Skinner, and Bill Skillman round out the top five.

Cobra Jets Mustangs also currently occupy three of the top five spots in Stock Eliminator with Kevin Skinner of Grove City, Ohio leading the way with an 8.964. Randy Eakins wheeled his Dodge Challenger Drag Pak entry to the No. 2 spot while David Ficacci is third with his classic ’69 Camaro. The Cobra Jets of Mike Kubiak and Bill Skillman are ranked fourth and fifth, respectively.

After one day of qualifying, the fields in the Spitzer Race Cars Top Dragster class and the Brodix/Steve Schmidt Racing Engines Top Sportsman class are already quick with an abundance of six-second qualifiers. In Top Dragster, which is open to the 32-quickest qualifiers, Rich Edwards of Terre Haute, Ind., leads the way with a 6.191-second run at 225.30 mph. He leads Troy Stone of Elkhart, Ind., who is a close second following a 6.217-second run. Stone also has top speed of the event with a 231.84-mph run in his Vintage Trailers dragster. Greg Curtis is third following a 6.362-second run.

Doylestown, Ohio’s Glenn Butcher is the early leader in the Brodix/Steve Schmidt Top Sportsman class with a 6.610-second run in his ’69 Camaro. Lester Johnson drove his ’55 Chevy Bel Air to a 6.698 for the No. 2 spot while 2010 JEGS Northern SPORTSnationals champion Ryan Ondrejko is third after a 6.754 run in his ’12 Camaro.

Several hundred competitors in Super Comp, Super Gas and Super Street also had the opportunity to test their cars during Friday’s time trial runs including JEGS Mail Order driver Troy Coughlin Jr., who is racing in Super Comp and Super Gas. Coughlin has already won three events this year in Super Gas and is one of the leading contenders for the national championship.

There figures to be a lot more action as qualifying and time trials continue on Saturday as the packed schedule includes the Moser Sportsman Shootout, which encompasses the top 16 competitors in seven separate classes, the popular JEGS Top Dragster Shootout and the DRAW/RFC Super Eliminator Shootouts presented by Moser Engineering.  Super Stock and Stock drivers will participate in the popular class eliminations on Saturday.