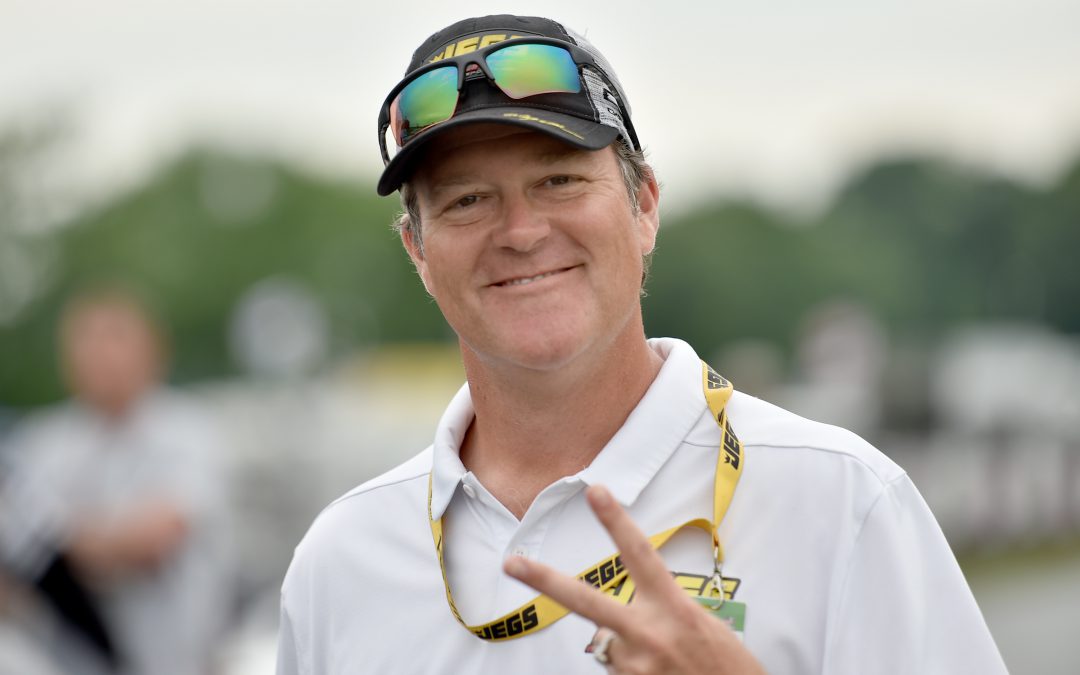 Trying to run in between a seemingly endless string of showers, Coughlin and his Rickie Jones-led JEGS.com/Elite Performance Chevrolet Camaro crew only had one shot at the newly-paved drag strip, but they made the most of it, running a stout 6.612 at 208.46 mph to lead the factory hot rod class.

"Our engineers, crew chiefs and crewmen have traversed a lot of different conditions throughout the 2018 season," Coughlin said. "Certainly, coming here to a freshly-poured track we would have liked to have been down it a couple more times but the Baders (track owners) did a great job. The surface is smooth and the rubber is going to continue to get better and better as the weekend continues.

"Rickie and the entire Elite team did a great job preparing for the one run we had. It was a bit of crapshoot but we turned out to be the closest to the right guess out of the 19 cars that ran and ended up No. 1 for the first time this season and it feels good."

As the No. 1 qualifier, Coughlin will open race day action against part-timer Charlie Westcott, a longtime friend who hails from Parma, Mich. Westcott's official qualifying time was 6.963 at 200.80 mph.

Coughlin's three-win streak started in Chicago with a victory in Pro Stock. He then won in Super Comp in Virginia before returning to the Pro Stock victory circle last Sunday in Bristol.

"We made some changes within the camp a handful of races ago that are working out very well," Coughlin said. "We changed the chassis and it was like a light switch as far as the car being more predictable. The first three or four races we knew we had a fast race car and things were turning our way. Then we got to Chicago and everything finally fell into place.

"This group has stayed together, weathered some storms and it feels really nice to see the recent rewards. I’ve been fortunate enough to this point to win 79 national events in my career and I can honestly say Chicago felt like one of my first ever wins because of how special it was with the team that I’m with. It was our first win together and everybody was as excited as I was. Then, to transition a couple of races later and get another win on Father’s Day was special as well.

"Our performance is really stout right now. This No. 1 qualifying effort certainly continues our momentum but we’ve got a lot of work to do to continue it tomorrow. The field is very tough right now so we will do our best to have a fast race car."

Across the Team JEGS pit, brother Troy Coughlin successfully qualified his JEGS.com twin-turbo Ford Mustang in the crowded field. His 5.866 at 251.77 mph pits him against Rick Hord, who posted a 5.754 at 254.76 mph. The Pro Mod class had two attempts at the track.

"We're still figuring this car out," said Troy, the three-time and reigning world champion in the category, who returned from a brief retirement three races ago. "I'll tell you, the competition is so stout right now that just making the top 16 is a big deal. We're pleased to have made the field but we sure wouldn’t have minded having another qualifying run.

"With all the rain, the track will be very green tomorrow, at least for Round 1. It should make for a very interesting session."

Troy's son, Troy Coughlin Jr., raced to the No. 4 qualifying position in his JEGS.com McPhillips Racing Top Alcohol Dragster. Like Pro Mod, Top Alcohol completed two sessions, with Troy Jr. maxing out at 5.268 at 277.37 mph. He'll race No. 13 qualifier Jeff Chatterson of Canada, who went 5.410 at 270.75 mph, in the opening round of eliminations.

"We've got the best team in the sport and we'll be totally prepared for tomorrow," Troy Jr. said. "The car ran well when we got our chance and I think the guys have a good plan for race day.

"I do feel bad for the fans having to wait out all the rain stoppages we had today but like true Ohioans, everyone I met was having fun and dealing well with the circumstances. I can't wait to race in my home state tomorrow and try to win one for JEGS."