Home-Track Advantage Has Cody Coughlin Pumped Up for Columbus 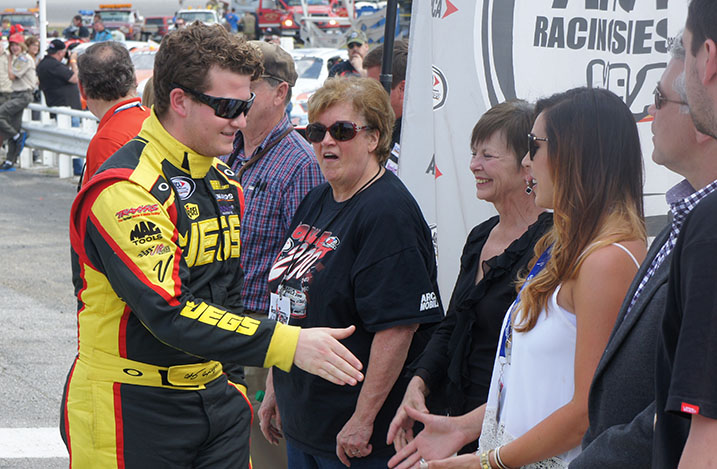 The New York Yankees have their raucous bleacher fans that boisterously root on the "Bronx Bombers."  The Ohio State Buckeyes' marching band entertains thousands each Saturday in the fall by playing their tunes to encourage the football team to victory.  The "frozen tundra" of Green Bay's Lambeau Field has intimidated visiting opponents who have frequently fallen to the home squad, the Packers.

Having a home field advantage is pivotal no matter what sport.  Eighteen-year-old Cody Coughlin will experience a familiar home-field advantage of his own this Saturday, June 28, as he competes in the ARCA/CRA Super Series JEGS 125 at Columbus Motor Speedway.

Coughlin, a Joe Gibbs Racing Development Driver, will have plenty of hometown fans adorned in JEGS yellow as they watch the hometown kid race for his first Super Late Model victory of the season at Columbus, which is located just miles from his Delaware, Ohio home.

"I have a lot of confidence every time I go there because it is the home track," said Coughlin.  "I probably have more race laps there than I do at any other place and it's great to see all the home fans in their JEGS hats and t-shirts cheering me on.  Kevin (Hamlin, team manager) and the guys at the shop have been working really hard to give me a good piece this weekend and hopefully we can put on a good show for the hometown fans."

Another momentum-builder for Coughlin was a recent fourth-place finish at Columbus in JEGS/CRA All-Stars Tour Late Model competition.  Coughlin started deep in the field, in 16th, but was able to march his way up to the lead pack late in the race.  While it wasn't the hometown win he so badly wanted, it gave Coughlin and the Team JEGS crew a solid notebook on what to do come Saturday's CRA event.

"I think we'll need to qualify better than we did the last time in order to have a shot at victory," added Coughlin.  "I think we had the best car there last time, but we just didn't have the track position.  We know what to do a little bit different this time around to be good in both qualifying and in the race.

"I was telling Kevin that I think we needed to be about two to three-tenths quicker than we were the last time in order to win the race.  We have some good direction on how to get it, so it's all smiles around our shop going into this weekend."

Coughlin is returning to the short track ranks after several recent strong runs in the ARCA Racing Series, where the 18-year-old is competing in select events with Venturini Motorsports under the guidance of Joe Gibbs Racing.  His two most recent ARCA runs came at the 2.5-mile Pocono Raceway and the two-mile Michigan International Speedway.  While the Columbus Motor Speedway oval is just one-third of a mile, he won't be approaching Saturday's race any differently than the others.

"I try to approach every race the same, especially because I'm not racing for points in any series this year," said Coughlin.  "Jimmie Johnson told me one time that all you can do is your best and race to your full potential every time you go to the track.  Sometimes it won't be a win.  Sometimes it will be.  If we can perform to our maximum potential, then it's a successful day for us.

"No matter what happens, I know God has blessed me with a great opportunity to chase my goals in this sport.  I've got a great crew, some unbelievable fans and the support of my dad (John), mom (Di) and sister (Kennedi) on my side and I count on those blessings each and every time I get into that racecar."

In addition to the numerous hometown fans and JEGS employees that will be supporting Coughlin from the grandstands, he will have his reliable Team JEGS crew at his side as they chase a victory.  With Crew Chief Nick Easton, Team Manager Kevin Hamlin and spotter Scott Wimmer, a former NASCAR winner, strategizing the race, plus crew members Dave Holt and Jeremy Wilbert tuning on the car, Coughlin has even more confidence on his side entering Columbus.

Coughlin's on-track action gets underway on Friday, June 27th with practice from 5pm to 8pm ET.  Race-day activities begin with practice at 3pm ET, followed by qualifying at 6:15pm.  The ARCA/CRA Super Series' JEGS 125 will be part of an action-packed night of feature racing that kicks off at 7pm ET.