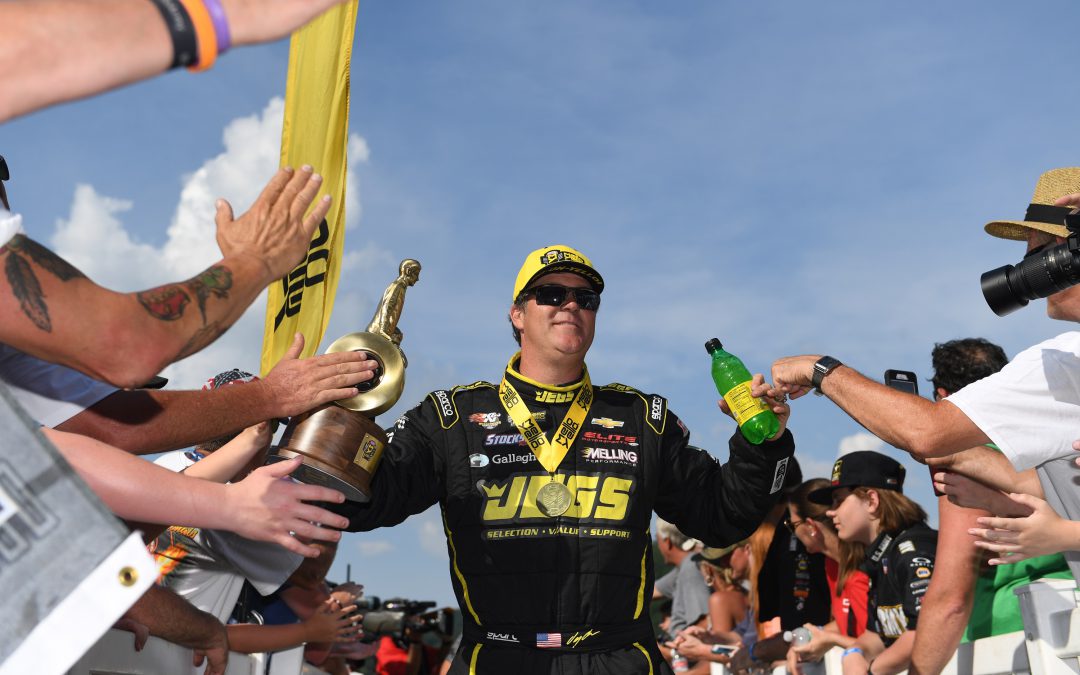 GAINESVILLE, Fla. (March 13) — Team JEGS drivers Jeg Coughlin Jr., Mike Coughlin and Troy Coughlin Jr. grew up admiring Jeg Coughlin Sr. and pretty much anyone who managed to win the Amalie Oil Gatornationals, which run for the 50th time this weekend. To honor both entities, the boys in yellow and black have big plans to win their respective classes in dramatic throwback paint schemes that replicate Jeg Sr.'s designs from the '70s, when the Gators were just getting started.

"We have a brand-new RJ Racecars Camaro and it looks completely badass with the design Dad ran back in the early-'70s," Jeg Jr. said. "We'd love to break it in with a big weekend in Gainesville. For those of us on the eastern portion of the country, there isn't much better than winning the Gators, especially when you see the names of all the former winners.

"This new car, obviously it's a bit different than what we've run the last nine months, is working extremely well in testing. Erica (Enders, teammate) made some shakedown passes with it and I jumped in as soon as I got here and the guys have been working their way through it ever since. It's been really fast no matter what we try with it so the crew chief brain trust here at Elite Motorsports is very excited.

"The car feels amazing. Ergonomically speaking, it fits my frame perfectly, so the comfort level is already very high. I'm extremely optimistic, with the talent we have, that we won't miss a beat."

Jeg Jr. won the last NHRA race in Phoenix three weeks ago, his 62nd Pro Stock victory, and is a two-time winner of the Gatornationals (2001 and 2008).

Brother Mike Coughlin also is honoring his father Jeg Sr. by running his former Top Fuel scheme on his JEGS.com Top Dragster, which is making his 2019 national event debut in Florida. Mike had a chance to shakedown his top-running rail last weekend at Gainesville Raceway during the Baby Gators divisional event.

"The car was perfect," Mike said. "And I don't expect anything to change this weekend. The only thing stopping us last weekend was the guy behind the wheel. I zigged when I should have zagged and lost in Round 2 by .006 seconds. Big thanks to Greg Cody, Dave Raurk, Ryan Micke and Tony Collier for giving me a perfect racecar.

"As soon as that event was over we started wrapping the car with Dad's old design and man, this thing looks so awesome. I am super excited to run this scheme at a race as historic as this one. I'll try my best to give Dad a great 81st birthday present and put this thing in the winner's circle."

Troy Jr., the popular and successful son of three-time Pro Mod champion Troy Coughlin, also has high hopes for his JEGS.com McPhillips Racing Top Alcohol Dragster, which is dressed in the Pro Comp design of his grandfather's glory days in the class.

"I can't wait to see Pappy's face when he sees this dragster," Troy Jr. said. "It's perfect and I'm more motivated than ever to turn on seven win lights and put this thing in the winner's circle. It's a big weekend with lots of legends on hand and if there was ever a time to shine, this would be it.

"Rich (McPhillips) ran the car at the Baby Gators to shake it down and then I hopped in there after the event and ran a 5.2 so I'd say we're more than ready to get this weekend started."

Samantha Coughlin, the wife of Jeg Jr., will round out the JEGS.com stable in her Super Comp dragster.

As part of the 50th anniversary celebration, the recently-restored Barracuda Funny Car campaigned by Jeg Sr. during the 1969 season will be on display at Gainesville Raceway. The car will be located in the Mopar display on Manufacturer’s Midway.

The JEGS Mail Order team will also take part in Sunday’s track walk, hosted by Darrell Gwynn. The event, labeled "Track Walk, for those who can’t" has annually helped raise money for the Buoniconti Fund to Cure Paralysis.