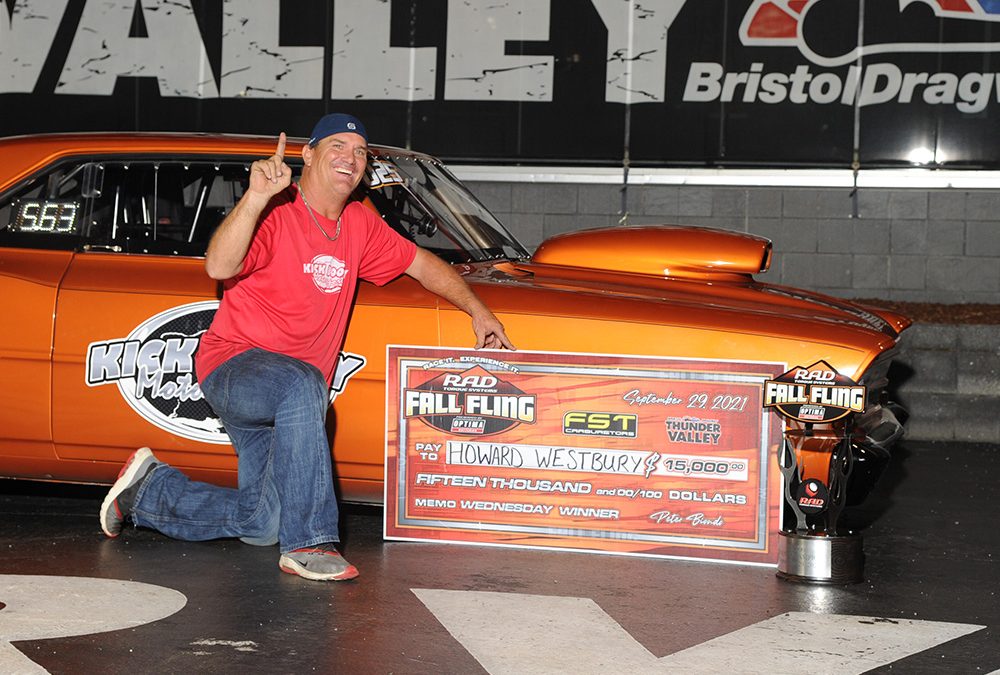 BRISTOL, TN — Another picturesque view of rolling green hills and blue skies set the scene for the second day of the RAD Torque Fall Fling presented by Optima Batteries. FST Carburetors Wednesday began with a time run for all racers on property to collect data in pursuit of the $15,000 purse.

The warm-up saw 354 entries stage up for the first round of eliminations with 196 dragsters and 158 door cars. The inclusion of buybacks made for ten rounds of racing to muscle through for one driver to end their night parked in the winners circle hoisting a big check and custom Fall Fling trophy.

Well into the night under the Bristol Dragway track lights, nine drivers remained on the ladder for round seven. Buddy Fleenor was .011 and one-thousandth under the dial on his solo shot, while Chris Gulitti took out John Labbous Jr. using a .029 advantage from the hit. Kris Whitfield put up .012 total on Timothy Thomas and Todd Ewing eliminated himself from the field by way of a .007 redlight which advanced Howard Westbury. The final pairing saw Will Holloman take just three ten-thousandths on Kurt Harrington to be dead-on one.

Gulitti and Westbury faced off in the first matchup of the quarterfinals where Westbury left .000 and crossed the stripe first by one-thousandth for the win. Holloman secured himself a spot in the semifinals using a .002 bulb over Fleenor, and Whitfield coasted on his bye run.

With three cars remaining in the semifinals Holloman and Whitfield battled it out to earn a place in the final round. Whitfield was .009 and dead-on two to be .011 total against Holloman’s .011 dead-on one, so by one-thousandth of a second Whitfield would meet the “Kick Booty” Chevy II of Westbury.

In a classic door car versus dragster final, Whitfield was just three-thousandths on the red side and one-thousandth under the dial. Westbury put up a .012 bulb and coasted on a free ride to $15,000.

On deck is Moser Engineering 25K Thursday which kicks off with a ‘New Entry Time Run’ at 8:15 a.m. To follow is ATI Performance Products 100K Friday and JEGS Performance 25K Saturday.

All of the action will be streamed live as it happens on MotorManiaTV.com free to the viewer thanks to JEGS Performance and Mickey Thompson Tires and Wheels.