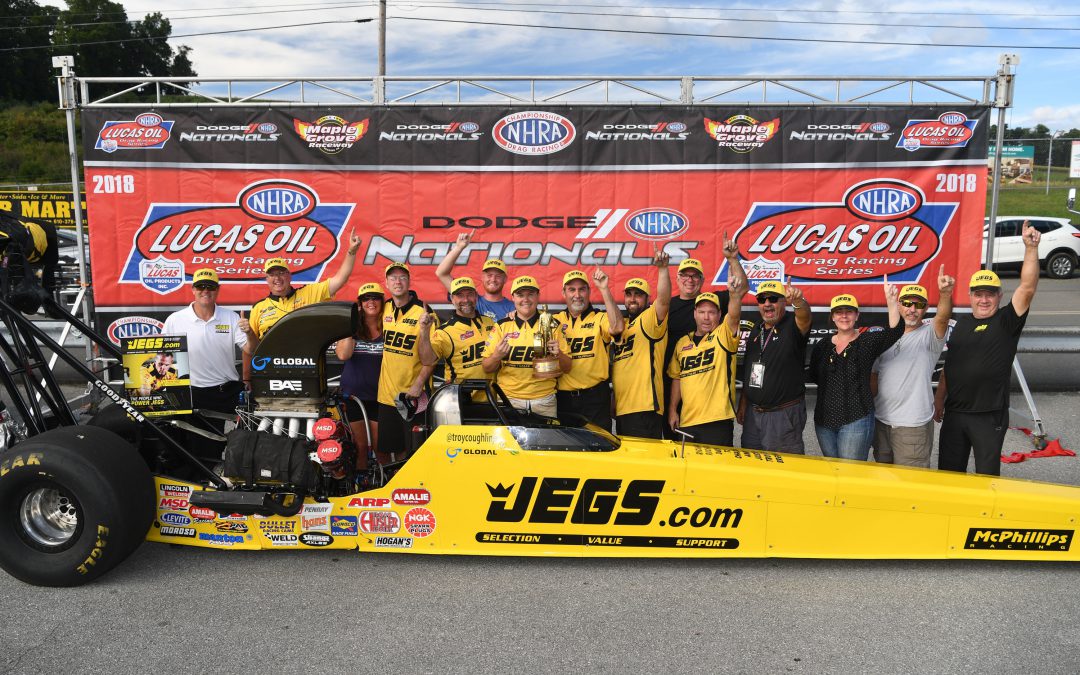 READING, Pa. (Sept. 16) — A huge win in Sunday's 34th annual Dodge NHRA Nationals at Maple Grove Raceway has given Top Alcohol Dragster driver Troy Coughlin Jr. a big boost in the national rankings. Racing at the hometown track of team owner and crew chief Rich McPhillips of nearby Phoenixville, Pa., Coughlin's JEGS.com McPhillips Racing dragster was the class of the field all weekend, ultimately resulting in the groups fourth victory of the season and third in the last four events.

"The guys on this team are fantastic and so tenacious with this place," Coughlin said. "You can definitely tell it's right in their backyard for how well this thing's been running all weekend. They know this place very well and it shows.

"This brings a lot of memories for me because my dad (Troy Sr.) won Pro Stock here in 2001 just a few weeks after 9/11 and it was very emotional. I was only 11 years old and I was back home listening to the race and after everything had happened it was so cool for him to win. Now here we are, celebrating again."

After qualifying No. 1 with a stout 5.268 at 270.59 mph, which earned Coughlin a first-round bye, the team used their massive local knowledge to beat Brandon Greco, Duane Shields and Josh Hart for their first NHRA national event victory of the season. Their other three wins came at regional races.

"It's all due to the McPhillips race team, the JEGS.com guys and the Global Electronic Technology group," said Coughlin, who previously won in Norwalk, Ohio, Cecil County, Md., and Bowling Green, Ky. "We feel so lucky to be standing here in the winner's circle at Maple Grove Raceway.

"There's a lot of passion in the Top Alcohol Dragster class; so much passion. These are everyday people with regular jobs who are out here doing this every weekend because they love it. They are all working so hard to make these cars run this well. As a driver, I am extremely fortunate just to be here with these guys and to be racing this class."

That set-up an important semifinal battle with fellow championship hopeful Shields, who entered the event 20 points ahead of Coughlin. Despite not having lane choice, Coughlin managed to win with a 5.337 at 273.77 mph to Shields' 5.360 at 272.83 mph.

Both Megan Meyer and Jackie Fricke, who were also ahead of Coughlin in the national points at the start of the weekend, lost in Round 1 at Reading.

The victory made Troy Jr. the first Coughlin to win in a Top Alcohol class.

"That's a huge deal all by itself," said Coughlin, who already claimed the North Central Region crown this year. "The Coughlin name and legacy means a lot to me and I take great pride in what my grandfather, my dad and my uncles have accomplished. They set the groundwork for me to be standing here today."

With the Countdown to the Championship underway, Jeg Coughlin Jr. arrived in Reading hoping to add to his Maple Grove Raceway record four wins in Pro Stock. Unfortunately for the driver of the JEGS.com Elite Performance Chevrolet Camaro, he lost in the second round to Greg Anderson, who had a better reaction time.