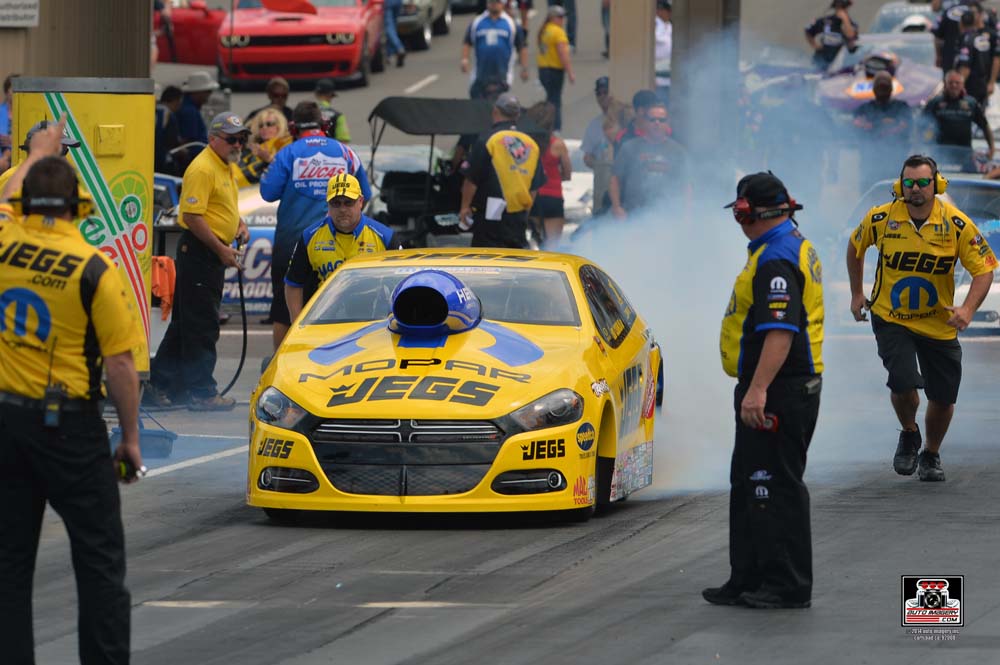 Coughlin has improved his elapsed time in every qualifying session of the Mopar Mile-High NHRA Nationals this weekend at Bandimere Speedway and starts from the No. 4 position for eliminations.

"After a slow start yesterday and Alan (Johnson) and Roy (Johnson) decided to make some changes on the engine side, and we just made a few minor changes on the car and woke it up today," Coughlin said. "I can tell we are getting so much better."

Struggles with the Dodge Dart on Friday left the reigning Pro Stock champion outside the top 12, so he had to start from scratch Saturday. But the changes to the car certainly worked, and Coughlin responded with a pass of 6.953 seconds at 198.67 mph in the third qualifying session.

"That last run we went .93 and it felt nice, but about third and fourth gear the tires were spinning pretty hard," Coughlin said. "I just let it creep out of the groove a little, but I think it struck the tire going into third and kind of pushed the car toward the centerline. I thought, 'This is not feeling too good' for a split second or two, and fortunately I drove through it.

"We don't have as much downforce on the car as we usually do in this thin air and that's something that we will look at and see if we can remedy a little bit better for tomorrow."

Coughlin's move to the top half of the field has him lined up against No. 13 qualifier Deric Kramer in the first round of eliminations. Kramer's best pass was 6.993 seconds at 196.87 mph.

"Making the improvement today is giving me that confidence for tomorrow," Coughlin said. "We always feel confident having a top-five car, and we have a tough contingent out here in Pro Stock. But the Roy Johnson horsepower is really good. It is everywhere, but it's really good here in the mountains.

"We will peck away at this thing we have two good runs on it. There is no question that (crew chiefs) Adam Hornberger and Mark Ingersoll will do some good work on the clutch and the chassis setup. I know Roy is still tweaking on the engine, so stay tuned."