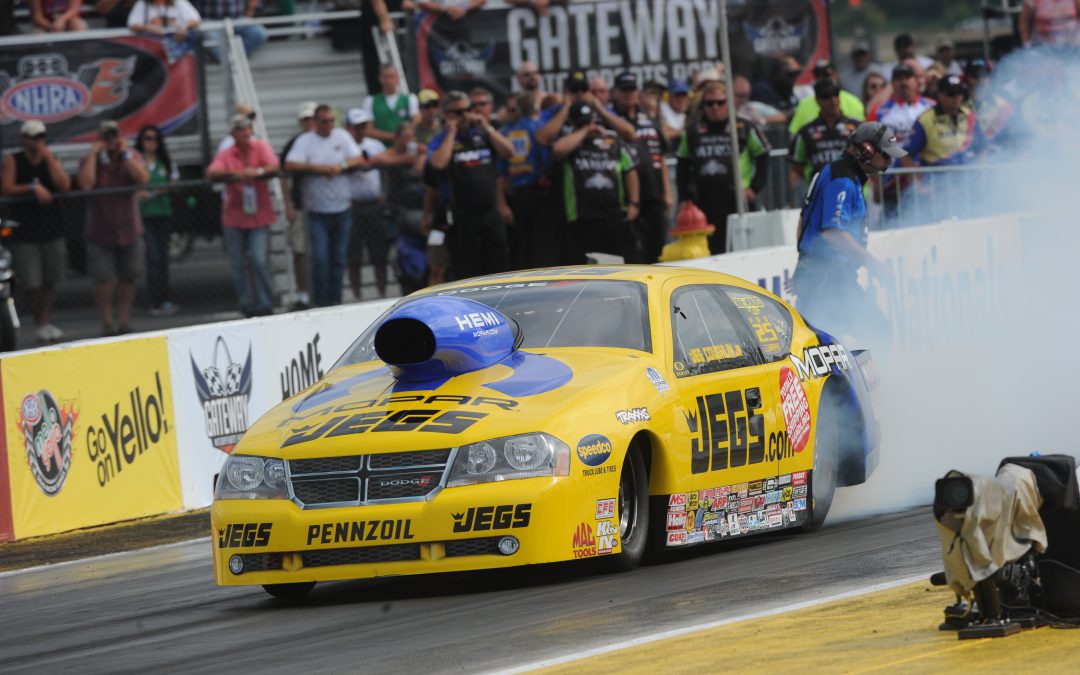 POMONA, Calif. (Nov. 4) — Jeg Coughlin Jr. is so close to the 2013 Pro Stock title he can almost feel the golden Wally trophy in his hands. But the five-time world champ won't let his mind wander that far, even though he enjoys a 71-point lead in the Mello Yello points as he arrives at Auto Club Raceway at Pomona for the season-ending 49th annual Auto Club NHRA Finals.

"After the Las Vegas race I started figuring out points and what we needed to do to clinch," Coughlin admitted. "Then I caught myself getting trapped in all the 'what if' scenarios and I stopped and said, 'This is crazy. We need to just do what we do, and that's drag race.'

"We need to treat this like a regular Pomona race, and that's a good thing because we've won here half a dozen times in the past so it's certainly a place where we feel comfortable. I get pumped up for Pomona because it's Pomona. The championship stuff will work out however it works out. If we take care of our stuff, then we'll be good."

With four drivers — Line (-71 points), Mike Edwards (-80), Shane Gray (-84) and Allen Johnson (-93) — racing from a three- to four-round deficit, Coughlin can clinch as early as the quarterfinals. A world record and the 20 bonus points it's worth could complicate matters but it's been 30 years since one has been set at this race.

"We're riding pretty high and things look good but we've got work to do," Coughlin said. "Everyone on this JEGS.com/Mopar Dodge Avenger race team knows that. In the past, we've come to Pomona needing a huge weekend to come from behind and win it all and we've done it. We've also come here with a lead and lost it. No one in our pit is going to take anything for granted. We all know what we need to do.

"It's been a wonderful year. We've been in the top three pretty much the whole way, had some great weekends and won four times in eight final-round appearances. Add in my teammates A.J. (Johnson) and Vincent (Nobile) and we've won half the races. We've talked about it and we knew if one of us got hot at the right time, we'd have a great shot at winning it all. This year, I got that win in Charlotte at the start of the playoffs and it really propelled us.

"We got hot at the perfect time, which is what it takes with the Countdown to the Championship format. Now we need to finish the job."

Qualifying begins at 1:45 p.m. PT, Thursday, with a single session. There will be another single session with the same start time Friday. Two qualifying sessions are on tap for Saturday beginning at 11:45 a.m. Eliminations are Sunday with opening ceremonies at 10 a.m. and racing at 11 a.m. ESPN2 will air all the action.