Incentive not a problem for Coughlin as home race looms 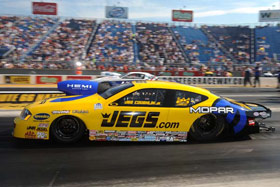 NORWALK, Ohio (July 3) – Five-time world champion Jeg Coughlin Jr. is planning for a busy weekend of NHRA drag racing, and he’s going to savor it like a pound of dollar ice cream.

Besides the more obvious rivalry implications of this stop on the NHRA Full Throttle Series, Coughlin said he’s looking forward to once again being a part of Pro Stock’s signature event, the $50,000 K&N Horsepower Challenge, and the overall celebration of all things related to drag racing in his native Ohio.

Coughlin will be the No. 8 seed in the K&N Challenge, which following a year off from the class, came by virtue of the fan vote, and will take on No. 1 seed Jason Line in the first round of competition.

“Norwalk is a big race for us, especially in how we are seeded for the K&N Horsepower Challenge,” said Coughlin, a three-time winner of the special event. “It’s exciting. We are obviously going to be in a similar situation to (last weekend at Chicago), where we are going to be parked next to the No. 1 qualifier. and that is by virtue of the way the program works. We’re excited for the chance and I can tell you that we can run with them.”

Coughlin said some of the primary goals of the weekend will be to get his JEGS.com /Mopar Dodge Avenger qualified in the top half of the field and try and make some progress toward cracking the Top 10 in points and a spot in the Countdown to the Championship. Coughlin is in 12th place currently but is only 22 points (a little more than one elimination round) out of 10th.

And as always when racing in his home state, Coughlin wants to put on a great show for the JEGS.com associates in the crowd and his home state supporters.

[[{“type”:”media”,”view_mode”:”media_original”,”fid”:”991″,”attributes”:{“alt”:””,”class”:”media-image”,”style”:”width: 280px; height: 187px; float: left;”,”typeof”:”foaf:Image”}}]]”I get asked a lot of times if it bothers me that the track is sponsored by our biggest rival in the marketplace. Heck no man,” Coughlin said. “That hometown crowd knows who is from Ohio. I’ve heard from our team members that when that win light goes on the place is electric.

“I look to bring them all a great show this week, and bring our family and team a great show. We’ll see if we can head into the Western Swing with a little more momentum and possibly sniffing our way into this top 10.”