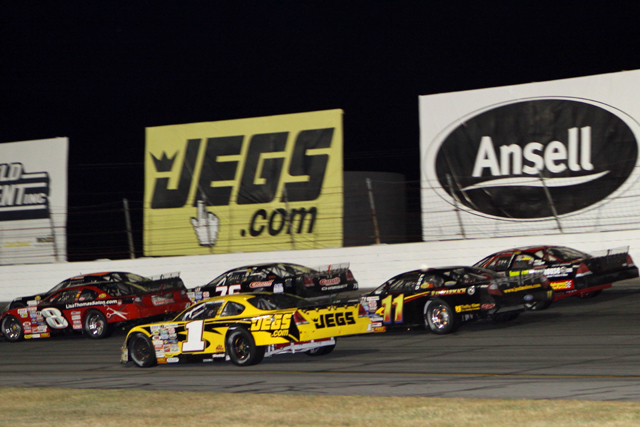 INDIANAPOLIS (July 28) — The Indy 100 presented by JEGS.com JEGS/CRA All-Stars Tour race at Lucas Oil Raceway provided 16-year-old Cody Coughlin with another lesson learned as he races his way through the 2012 schedule.

Fresh off of a solid fifth-place finish the week before in Anderson, Ind., Coughlin took to the historic .686-mile Indianapolis short track and tallied a 12th-place finish.

"It’s a fun little track with sweeping corners," Coughlin said. "We qualified pretty good, and I feel like we could have gotten another top-five, but the tires were used up at the end."

In the heat of the day, Coughlin qualified his No. 1 JEGS.com Chevrolet for the 100-lap race in the seventh position. After a lengthy wait for the USAC events to run their course, the JEGS/CRA All-Stars finally took to the track just after 11 p.m. Eastern.

As the green flag waved, Coughlin’s No. 1 Chevrolet however, was stuck in gear. The caution flag promptly waved, allowing his crew chief Butch VanDoorn and the team to assess the issue on pit road. With a tweaked transmission, Coughlin rejoined the race at the end of the lead lap.

Following the restart, the 16-year-old showcased his impressive skills by picking off cars one by one. It didn’t take long for him to muscle his machine through the field an into a battle for a top-10 spot.

As the race hit the halfway on lap 50 under a caution flag, the JEGS Chevrolet was scored in the 11th spot. VanDoorn radioed to his driver, "Just do your thing and keep picking them off." At the time, Coughlin reported a slight tighting condition through the center of the turns.

With 25 laps remaining following another caution flag, Coughlin flexed his competitive muscle, holding his own in multiple three-wide battles around the tight short track.

As the laps clicked down, the racing intensified with the field taking a final restart just three laps from the finish. The final dash to the end was hard fought for the young racer, as his familiar yellow-and-black JEGS entry battled the lingering tight condition through the checkered flag.

"Butch, Scott (Wimmer, spotter), Kevin (Hamlin, team manager), and Bubba (Pollard, driver coach) have been a big help over the last few weeks," Coughlin said. "We are getting there. We need to go testing to get everything figured out. It’s unfortunate we had that transmission problem at the beginning, but we were able to get back out there and learn some more for the next race.

"We have a good group here, and I can’t thank them enough for all of their hard work. My team, my Mom and Dad, my sister, I can’t say enough about how much they all do for me every week. It means a lot.

"Thanks, too, to the Lord for safety and for lessons learned to help me be a better driver and person."