Inspired Coughlin ready to get down to business 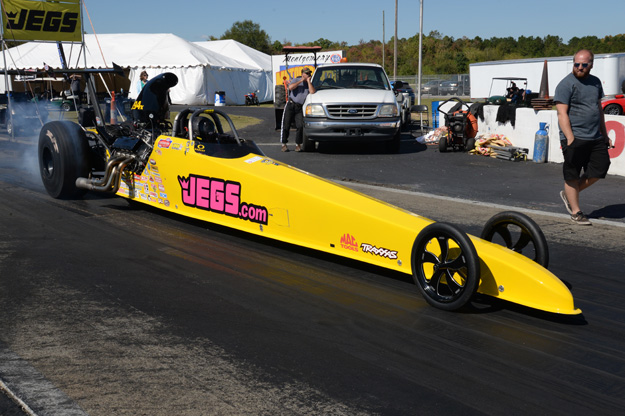 MONTGOMERY, Ala. (Oct. 21) – Troy Coughlin Jr. has been racing two separate cars for the last three days so he figures he’s got more than enough practice time ahead of tomorrow’s main event at the CARS Protection Plus Million Dollar Drag Race. Coughlin plans to double enter the main event, racing both his JEGS.com dragster and the ’66 Chevy II he’s borrowed from his uncle, Jeg Jr.

“We get a time trial run tomorrow morning but I really don’t even want to make it; I’m ready to go right into eliminations and go race,” said Coughlin. “Tomorrow is the big day; it’s the biggest race of the year and we need to shine.”

During Friday’s $25,000 event, Coughlin lost in the second round in the Chevy II and posted a round three finish in his dragster. Although he wasn’t able to make the late rounds, he considers the practice invaluable when formulating his strategy for the big race.

“We have a lot of good data and I have a pretty good handle on the weather conditions,” Coughlin said. “There is nothing wrong with either race car. Justin [Beaver, crew chief] has both of them ready to go. It’s all on my to drive them and not make some of the mistakes I’ve made the past two days.  So far, I’ve just picked the wrong time to make a silly mistake and it has cost me. If we can eliminate those mistakes, we’ll be in good shape.”

In order to help relax ahead of what he hopes to be a long and prosperous day, Coughlin decided to curl up with a good book. In this case, he’s reading Top Fuel For Life, the book authored by Kalitta Motorsports team manager Jim Oberhofer, who will be Coughlin’s crew chief next season when he moves to the Top Fuel class next season.

“This book is amazing,” Coughlin said. “It’s all about finding balance in your life and that’s something that I’m just starting to take seriously. Yes, we’re going to be racing for a lot of money tomorrow but that’s not the important thing. The important thing is to live life to the fullest and don’t take any day for granted. That’s the attitude I’m taking into tomorrow.”