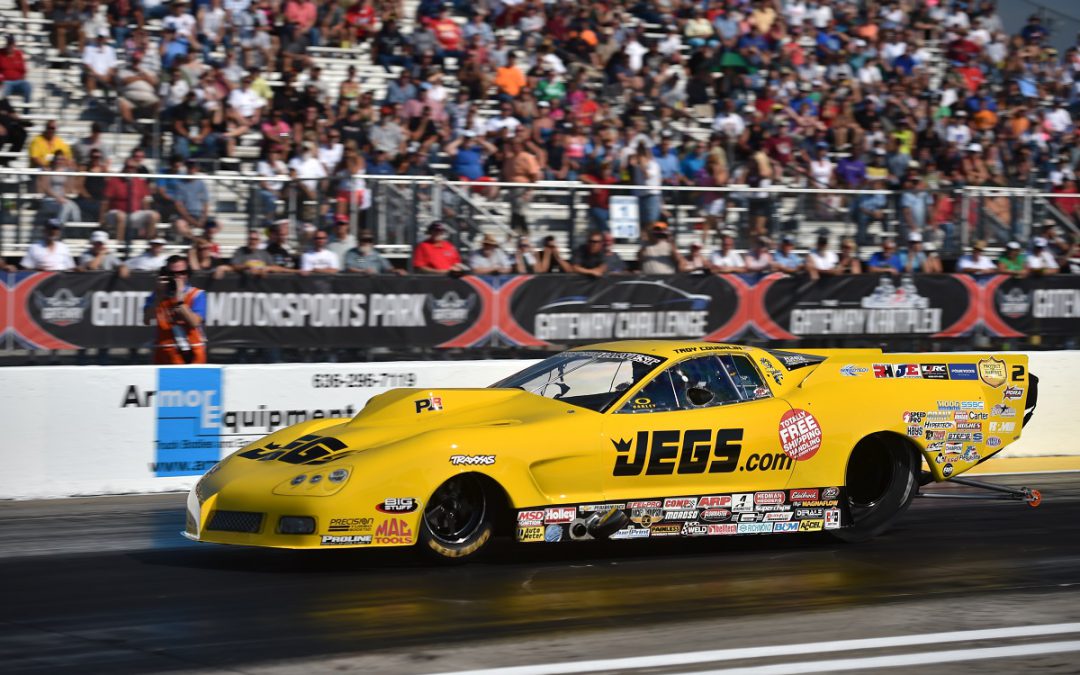 LAS VEGAS (Oct. 27) — Two years ago, multi-time world champion drag racer Troy Coughlin entered the NHRA Toyota Nationals at The Strip at Las Vegas Motor Speedway needing to make up three rounds in the points standings to win the 2012 Pro Mod championship. Rolling into this weekend's race, the driver of the JEGS.com twin-turbo Corvette is facing the same daunting task.

"We have a shot," he said ,"and that's exciting. We need a break for sure, just like we did two years ago, but if the stars line up just right we could pull this deal off."

With Lady Luck on his side in 2012, Coughlin got to race then points-leader Mike Castellana in the quarterfinals of that event, giving him the chance he needed to make a move. Coughlin beat Castellana and rode the momentum of that monumental victory to two more round wins and ultimately the championship by the slenderest margin in class history.

This time through he's 76 markers behind reigning champ Rickie Smith, and just one ahead of Mike Janis, so he'll need those two teams to stumble and his own car to excel to even have a chance.

"Like they say in poker tournaments, all you need is a chip and a chair," Coughlin said. "Obviously, it would be great if we could get Rickie in the first round so we would have a chance to beat him head-to-head like we were able to do with Castellana. That would be the dream scenario.

"There's really only so much you can control. What we can do is make sure we run to the best of our abilities. We need to be smart and make darn sure every component on the car has been double- and triple-checked. We have had some downtime so I know the car is in great shape. All the artillery shells have been reloaded."

"Steve (Petty, crew chief) has really found a handle on the car the last few outings," Coughlin said. "We've managed to win two of the last four races (in Norwalk, Ohio, and Charlotte) so we need to continue to make good runs.

"I'm trying to be as sharp and consistent as possible behind the wheel. We can't try any harder. I'm pushing that gas pedal all the way through the floorboard, trying to touch the No. 7 header port! We are definitely holding nothing back."