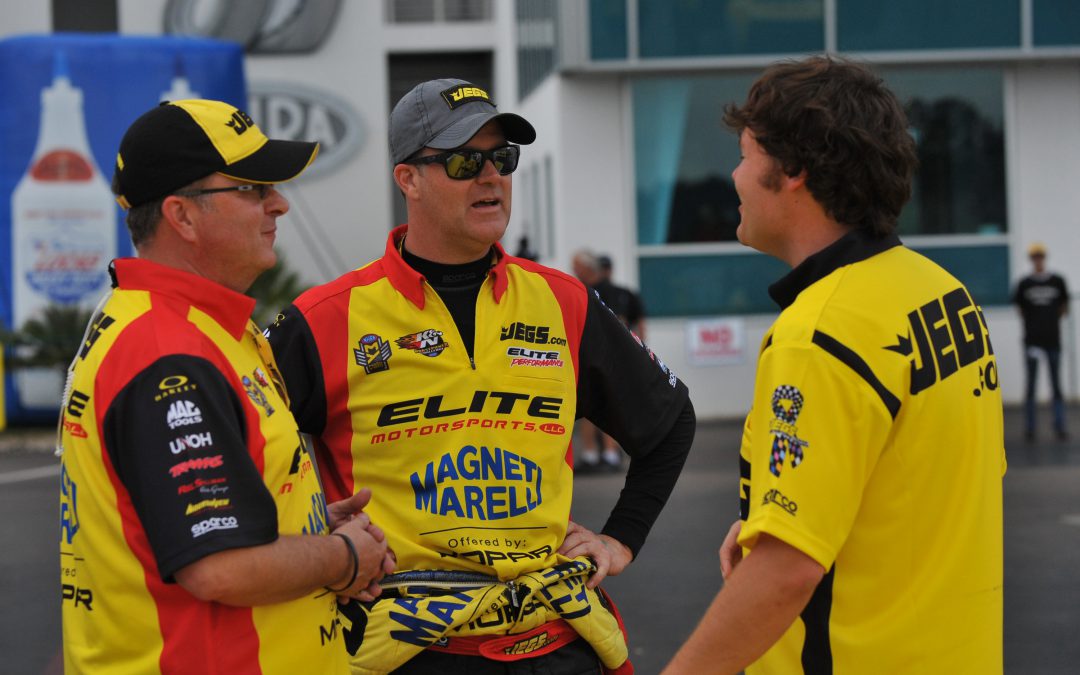 GAINESVILLE, Fla. (March 20) – Jeg Coughlin and his Elite Motorsports team didn't take a gator-sized bite out of the competition, but the five-time Pro Stock champion is still pleased with the progress of his Magneti Marelli offered by Mopar/JEGS.com Dodge Dart after the Amalie Motor Oil NHRA Gatornationals on Sunday at Gainesville Raceway.

Coughlin qualified a season-high No. 6, beat Chris McGaha in the first round and scored a huge starting-line advantage on Greg Anderson in the second round before shaking the tires and falling out of the running.

"We took a small bite of their margin of performance advantage," Coughlin said of the KB Racing-powered cars that have won each of the first two races. "I think the class itself is getting caught up a little bit by the looks of it. The Gray Motorsports cars are going faster, we inched up on them a little bit more on the Mopar side.

"I know we're heading in the right direction. We've said by the first three to five races, we need to get our act together and get some consistency. We felt like we had a little bit better racecar here, and we did: We qualified in the top half with our best effort at No. 6, showing that we're making strides."

Coughlin won in the first round for the third consecutive race of 2016, beating McGaha despite trailing on the starting line. McGaha had to push the clutch in early and coasted to a 7.458-second lap at 140.77 mph, while Coughlin sped to a pass of 6.632 at 209.14 mph. Coughlin's uncharacteristic .080-second reaction time was an attention-getter for the Pro Stock vet.

"I was just off; I wasn't paying attention," Coughlin said. "When you get by with it, I call that a wakeup call, and I was ready for Greg second round."

Coughlin then ripped off a .018 light to give him a five-hundredths advantage on Anderson, but it went away almost immediately.

"We had a sizable lead off the starting line, and it would've been nice to run it down through there," Coughlin said. "We probably would've turned the win light on, but coulda, shoulda woulda,I know."

Coughlin and his team tried to fine-tune their Dodge Dart after being a little too aggressive in the first round. But Coughlin shook the tires early in the run and was forced to push the clutch in and coast to a pass of 12.830 seconds at 91.11 mph, while Anderson sped to the finish line with a 6.621-second pass at 209.75 mph.

"What (crew chiefs) Rick and Rickie (Jones) did to try to calm the car down and get it to accelerate that first 30, 40 feet, it really sounded like a great gameplan," Coughlin said. "I was the first to be shocked as I let the clutch out. The car started to go and felt pretty good for a split second, and then I could feel it go north with the rpms, and it was shaking hard. All I could do, honestly, was push the clutch in."