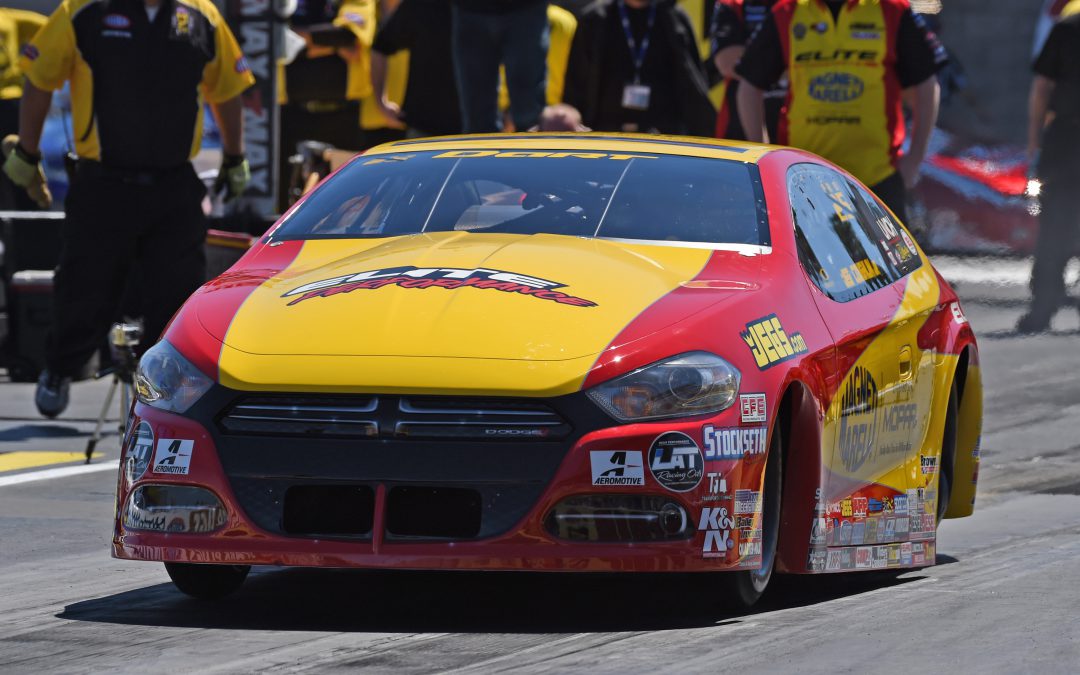 LAS VEGAS (April 2) – Five-time Pro Stock champion Jeg Coughlin Jr. is hoping the No. 13 is his lucky number for the Denso Spark Plugs NHRA Nationals this weekend at The Strip at Las Vegas Motor Speedway.

Coughlin and his Magneti Marelli offered by Mopar/JEGS.com Dodge Dart qualified in the No. 13 spot on Saturday.

"Lucky 13, it's gonna have to be," Coughlin said. "Let's just start there. Nothing has been lucky to this point for us, but as we all know, that can change quickly here in Las Vegas."

Coughlin started the weekend with an excellent run in the first qualifying session, but Lady Lucky hasn't been on his side after that 6.756-second pass at 203.16 mph. Coughlin had to lift early in his Q2 run, and then he lost in the first round of the K&N Horsepower Challenge – which also stood as the third qualifying session – on Saturday.

And the last bit of bad luck struck in Q4, when another problem forced Coughlin and his Elite Motorsports team to miss the final session.

"We made a decent run in Q1 with a .75," Coughlin said. "Like I mentioned to them in the shutdown area, it was very uneventful, and it was very smooth. It didn't feel like it had a whole lot of pep, and we checked everything out, and it all looked fine on the Racepak."

Coughlin figured his team, led by crew chief Rickie Jones, would be able to make improvements off that Q1 pass. Plus, Dodge teammate Erica Enders made a solid run. But a mechanical issue caused Coughlin to abort his Q2 run, and the team changed engines heading into Saturday and the first round of the special K&N Challenge race.

"We knew we could go off Erica's .71, which was great," Coughlin said. "It shows the work we've been doing at Elite Performance is paying off, and we're chipping away at some of the leads some other teams have.

"The car spun the tire real hard in low gear, and I was like, 'Maybe it had a lot more power than we compensated for and we missed it a little bit.'"

After missing Q4, Coughlin's team continued to work to present the best effort for the first round of eliminations Sunday. He'll square off against Elite Motorsports teammate Drew Skillman, who qualified No. 4 with a top pass of 6.706 seconds at 204.73 mph.

"We'll step back and see if we can't take the pieces and parts we have here to give us a good effort tomorrow," Coughlin said. "We run our teammate in Drew Skillman first round, and he was low for the last session, so they're going to be extremely tough.

"We've elevated our program coming into the event, so hopefully we'll have something to run next to him with."