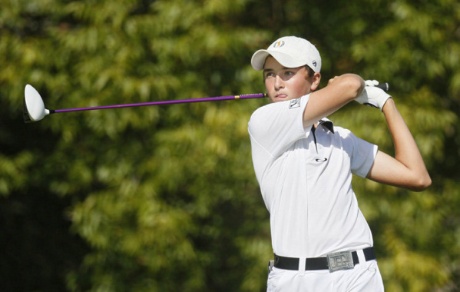 "Everything worked out great for me," said Coughlin III, better known as Jeggie among his friends and family. "It's very cool to do this because Jack Nicklaus won this tournament back when he was just getting started and to do something he did is very special.

"I'm really glad to do this as a junior because I'll have a chance to defend it next year. That doesn't happen very often so it'll be another big challenge."

Jeggie, a junior at Village Academy in Powell, Ohio, had to go through sectional and district tournament to qualify for the state competition. Jeggie shot a 74 in the sectional tournament at Darby Creek Golf Course in Marysville, Ohio, to tie for the individual victory and advance to the district qualifier. That tournament was held at River Greens Golf Course in West Lafayette, Ohio, where Jeggie advanced to state with a runner-up finish.

The state championship was a two-day tournament held on the Scarlet course at Ohio State University Golf Club, where Jeggie shot even par to win by three shots. His two-day total of 144 (73-71) broke the high school record on the course, which holds the state tournament every other year.

"It was truly amazing to watch and cheer Jeggie on," said his dad, Jeg Jr., a five-time National Hot Rod Association world champion. "I couldn’t be happier or more proud of how he played and handled his game. From the onset he had a game plan, stuck with it and prevailed with some fantastic golf."

Jeggie was especially sharp on the final day of the tournament, making clutch shots throughout the round. He drained a long downhill putt from off the green on No. 3, holed out a 119-yard chip for an eagle on No. 4, scrambled to save par from the sandtrap on No. 14, and saved par after missing the green on No. 17 with a terrific pitch that left his ball inches from the hole.

On the final hole, Jeggie drove his tee shot into a bunker 210 yards from the hole and chose to lay up 60 yards from the green. He nearly chipped in for birdie from there but sank the par putt to claim his first major title for junior golfers.

"I started working with Darren May at the Bear's Club down in Jupiter, Fla., last year and he's just transformed my game and taken everything to a new level," Jeggie said. "He reminded me that this tournament won't define my career, and that it's more like a steppingstone to where we want to be in five, 10 years. It's quite a deal. I had a mental plan of attack and stayed on that even when I'd hit a goofy shot here or there."

Jeggie has a busy winter planned, as he'll play in 18 tournaments down south. His next goal is already in focus: to become an All-American at the high school level.

"I'm so thankful to my Mom and Dad for giving me all the help and support I could ever ask for," Jeggie said. "It really takes a team to win at this level and they're a big part of this, for sure."