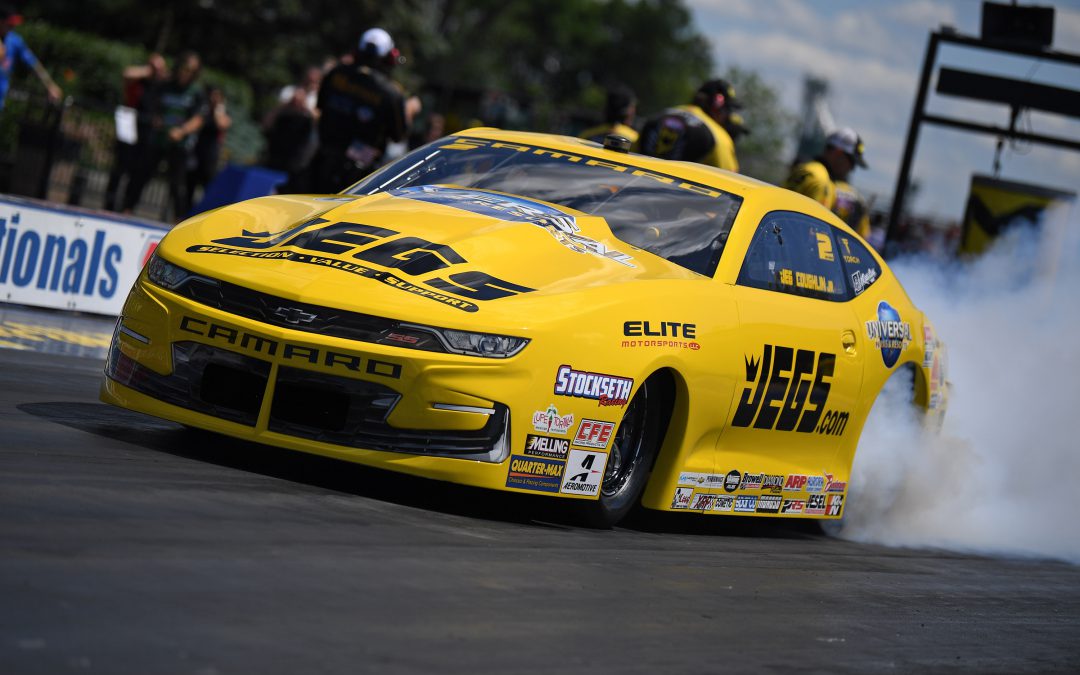 With temperatures soaring at the Bader family's beautiful facility, both men found themselves losing traction just off the launch and after a moment of hesitation when they each realized the race was still on, the two tried desperately to get their cars under control and reach the finish line. Ultimately, Laughlin was able to calm his car first, limping over with a winning 8.794 to Coughlin's 9.330.

"He blew my birthday candles out," Coughlin said with a laugh. "There's not a whole lot of pedaling contests in Pro Stock because it's so rare for both cars to lose traction at the hit like that but, obviously, being teammates and all, his car is set-up very similarly to mine and we got the same result.

"We had a nice jump on him (.050-second head start) and I knew I had hit the tree really well but before I had time to enjoy that feeling my car tried to come around on me. I went through second and third (gear) and it was still all over the place so I pulled fourth and fifth and was being as gentle as I could to get it into the groove. Alex just got his car settled down a touch sooner and edged us down at the other end. We both wanted that one so much. It was actually a really fun race."

Nothing came easy for Coughlin on his 49th birthday. Working all weekend without his regular crew chief Rickie Jones, who stayed home for the birth of his daughter, the JEGS.com Elite Motorsports Chevrolet Camaro crew managed to collectively tune him to a mid-pack starting spot.

That forced a first-round date with two-time champ and teammate Erica Enders, whom he beat with a 6.609 at 208.71 mph when she got a little out of shape herself. Coughlin then had to beat No. 1 qualifier Derek Kramer to even have a chance at Laughlin, which he did with a 6.636 at 208.62 mph. Kramer also suffered tire shake early in his run.

"I felt great on the Tree all day," said Coughlin, who posted stellar reaction times of .016, .013 and .009 seconds. "We know Erica is always sharp. Derek had been killing the Tree all weekend so we knew he'd be ready, and Alex is one of the best in the class. To leave first on all three of them in one day is special.

"We had a great race. I'm having an awesome birthday. Having my father and brother Troy, my wife Samantha and little Carly all here, along with checking off most of the boxes we wanted to accomplish with the racecar, it's hard to complain. Big congrats to Rickie and his wife as well on the birth of their daughter. He did all he could from home, reviewing each run on the computer and working with the guys over the phone. I'm also thrilled for my nephew Troy for winning in Top Alcohol Dragster. What a great moment for him. It's time to party."