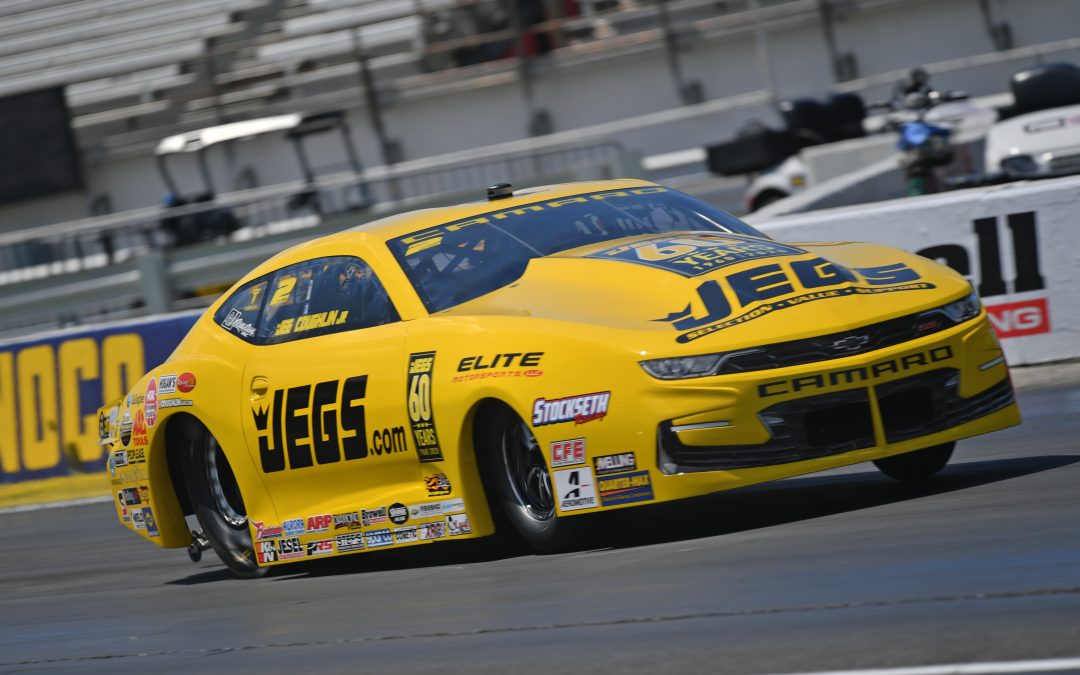 “We had a really good feeling coming into today that we’d perform well but you never know until you drop the clutch,” Jeg Jr. said. “Rickie Jones (crew chief) and the yellow and black JEGS crew did a great job matching the car to the conditions in both sessions. We were second quickest this morning and third best this afternoon, less than a hundredth of a second off the leader both times, so we’re pleased.

“It sure felt great to get back in the car after this unprecedented time away. We won the NHRA’s season opener and the Doorslammer Nationals before the COVID virus arrived in March so we had a fantastic start to the season. You just don’t know what could change in a long break like we had but so far it appears we’re picking up right where we left off.”

By qualifying second with a 6.635 at 206.89 mph, Jeg Jr. will enjoy lane choice against new teammate Bruno Massel, who usually works as a drag racing reporter on FOX TV. Massel qualified his AutoGeek.com Elite Motorsports Chevrolet Camaro 15th on the grid with a 6.692 at 206.64 mph.

On the opposite side of the ladder, No. 13 qualifier Troy Jr. will yield lane choice to class heavyweight Greg Anderson, who was the quickest overall in the second session. Anderson’s best time came in the morning when he went 6.638 at 206.70 mph, while Troy Jr.’s top mark came in the afternoon when he cranked out a 6.678 at 206.16 mph.

“It’s very exciting to be starting my Pro Stock career against one of the best drivers in history,” Troy Jr. said in a nod to four-time class champ Anderson. “I’m going to do all I can as a driver to beat him and I think we have a car that can do the job if I do mine. This is a great group here at Elite and they have all the pieces it takes to win.”

Troy Jr. was outside the qualified field after the first session but coolly posted the eighth-best pass of Round 2 to secure his starting spot.

“These Pro Stock cars are so challenging to drive,” Troy Jr. said. “There are so many small things that happen during a single pass and each one of them can make a big difference in how your run turns out. Just making a decent pass quite a feat. It’s all about consistency, precisely hitting each shift point, and staying in the groove.

“I was a little concerned after Q1 but I’ve been in that position before in other categories so you just kind of learn to deal with your nerves. I already have a lot of faith in the crew and I knew what we did during testing on Thursday and Friday so I told myself I just needed to execute. Now we’ll step things up and do our best to challenge Greg.”