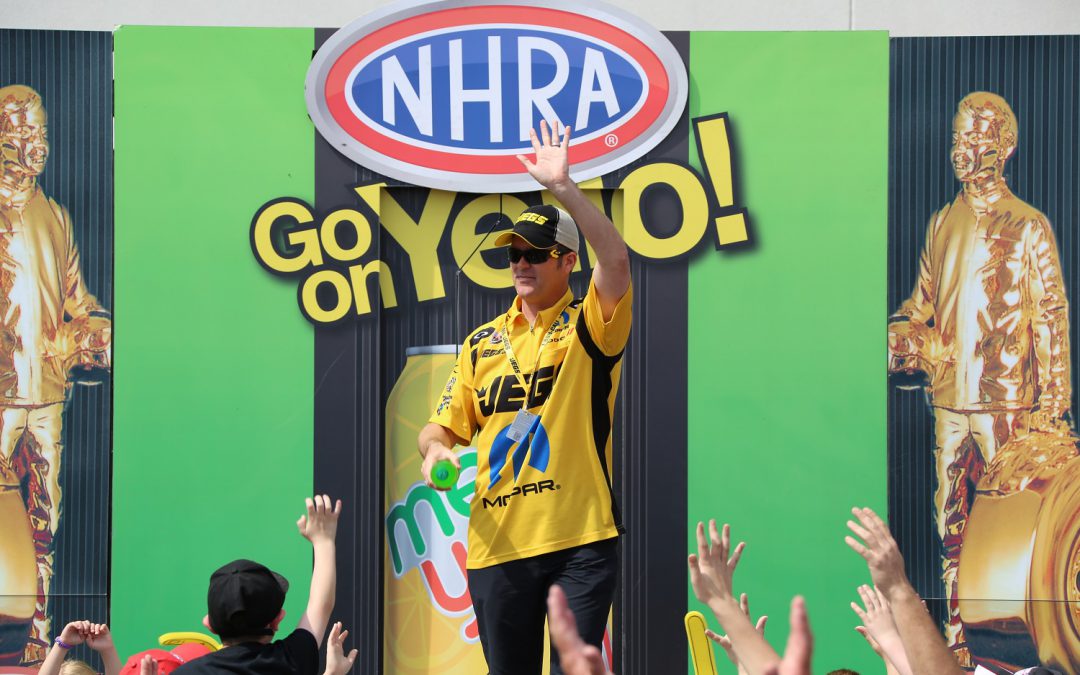 BRISTOL, Tenn. (June 15) — Reigning world champion Jeg Coughlin Jr. used a semifinal finish Sunday at Bristol Dragway to claim second place in the 2014 rankings. Coughlin entered the event tied for second with teammate Allen Johnson but when Johnson's car encountered issues in the opening round, Coughlin was able to begin pulling away, adding two full rounds of racing to his yearly tally.

"We had a bad ride today," said Coughlin, who qualified second for the event. "We made three real nice runs. That second round, it was a little bit loose, going left a little bit. But it was digging all the way through the arc that it made, and it was still low elapsed time of the round."

In fact, Coughlin had low elapsed time of all three of his rounds Sunday. He opened with a 6.651 at 207.78 mph in dispatching Kenny Delco, then posted a 6.671 at 207.05 mph opposite Vincent Nobile to set up a semifinal date with points leader Erica Enders-Stevens.

"I felt fantastic," Coughlin said. "I wasn't trying to drill the lights out of the Tree or anything against Erica. I really felt like I could repeat what I did with Vincent and have a low .010, maybe .008 reaction time at best. I was shooting to be .015 to .020, but I must've just caught it all.

"I let the clutch out and was so focused on getting the car down the lane that I never even saw the red light. I put the car in fifth gear and had a glance or two to the other lane. We got through the finish line and I never saw any win lights; at least I never saw mine come on. I was a little perplexed, and I was having a hard time putting it together, but it didn't take a rocket scientist to figure it out shortly thereafter."

The semifinal loss marked the first time Coughlin didn't reach the final round in four consecutive races. He previous won races in Atlanta and Englishtown, N.J., and was runner-up to Johnson in Topeka.

"I feel real comfortable in the car," Coughlin said, "and when I'm comfortable it always picks me up a little bit, honestly. Gamedays are always fun and that hasn't changed at all. Sure we hate to give one back, but that's just the way it was made out to be. We'll try harder in Epping."

ESPN2 will carry eliminations in slight tape delay this evening.

Coughlin and crew will now head to the Northeast for next weekend's event at New England Dragway in Epping, N.H.