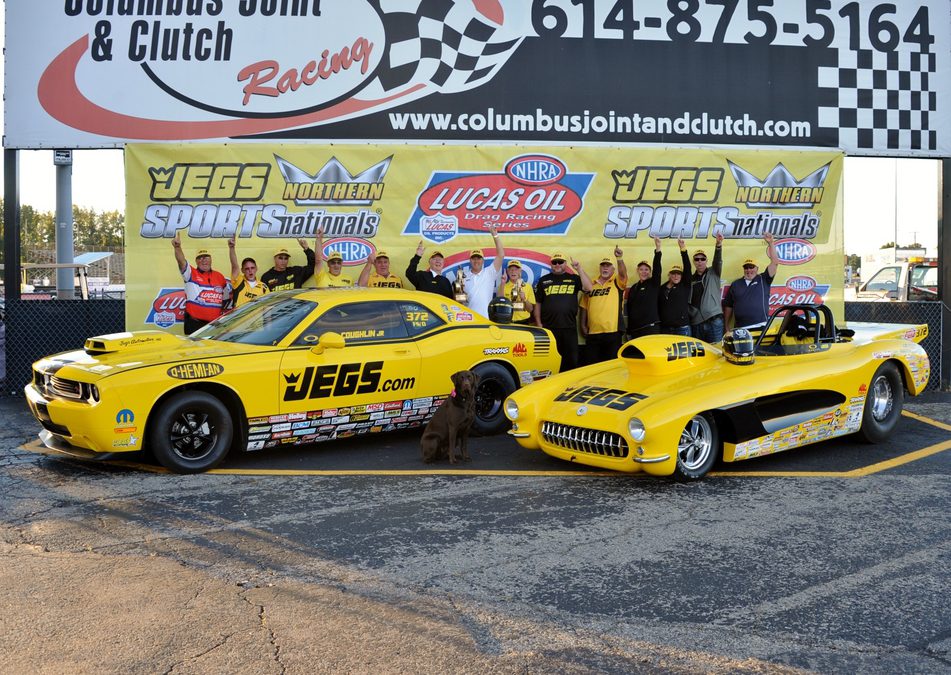 By winning both the Stock and Super Gas trophies at his home track of National Trail Raceway at a race sponsored by the family business — JEGS — Coughlin now has victories in Pro Stock, Comp, Super Stock, Super Comp, Super Gas, Top Dragster and Stock.

"It's pretty incredible," Coughlin said after tallying career wins Nos. 75 and 76. "Growing up in this sport, I never set out to win in a bunch of different eliminators. In the early days before I got into Pro Stock, jumping from class to class was much more of a strategic deal as I'd try to collect points towards various championships I thought I could win. The different wins just happened and now here we are.

"It makes me think about all the great teams I've had behind me all these years. I'm just doing what I love but if it wasn't for the various people who have played vital roles helping us get there, none of this would have happened. I've been very fortunate."

"I'm a little fatigued today, for sure," he said. "Not so much physically tired but mentally drained. The way the schedule turned out they ran Stock and Super Gas back-to-back so the action was pretty much non-stop all day. I was forced to stay focused and perhaps that helped with the outcome.

"I was excited to win two categories at a national event because I don't think that's happened too many times in history. I know I've had five or six shots at it in the past and never pulled it off before now. I've had doubles in bracket races and divisionals but not at the national level, so that was exciting. Then add in the seven different classes deal and you have a really special weekend.

"Big congrats to my buddy Todd Frantz as well because he had a double of his own in Comp and Super Stock. I don't know if we've ever seen a national event where two guys doubled up before. That's a Bob Frey question right there."

Racing with his brothers Mike (a semifinalist in Top Sportsman) and John (who reached Round 2 in Super Street), as well as nephew Clay and niece Paige, who got their kicks in Junior Dragster action, Jeg certainly had lots of people to share in his special day.

"Pops was there Sunday, Mike, John, Clay, Paige and a lot of family were either racing or cheering us on, and we had many folks from JEGS supporting us," Coughlin said. "It was also a thrill to have the guys from the race shop and their families alongside us. They don't always get to share in the Winner's Circle celebrations but this time they were able to so we took our time up there and snapped a lot of photos. It was a great ending to a big weekend for JEGS."