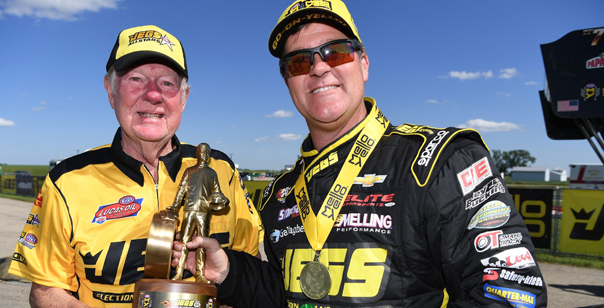 Coughlin had a stellar day behind the wheel of his JEGS.com/Elite Performance Chevrolet Camaro, posting an impressive string of super-quick reaction times in all four elimination rounds to help turn on the win lights he needed, and his team took care of the rest, giving him the quickest racecar of every pro session.

"Did we have a good time today? Yeah!" Coughlin said excitedly upon reaching the winner's circle. "Wow, what a race. Every round felt like a final round. You look at the guys we beat today, including my teammates in the first two rounds, it's just a fantastic accomplishment.

"Rick and Ricky Jones (crew chiefs) gave me a rocket this weekend. We found a little problem with the racecar Friday night and actually the KB Racing guys helped us out with some parts so we give them kudos. I had a rocket come Saturday. I was third best in Q3 and second best in Q4 and then we led the pack all day today. It's just fantastic."

The last time Coughlin won a Pro Stock race was in 2014 at Old Bridge Township Raceway Park in New Jersey. This victory is the 77th of his career and the 59th in Pro Stock, a mark that places him a lofty fourth on the all-time class list.

"I could tell the excitement in Ricky Jones' voice over the radio in the final and that meant the world to me," Coughlin said. "He and I are really working well together. The whole team has been hard at it for months. This is very satisfying, especially with this being the JEGS Nationals.

"The entire weekend was an absolute homerun for our company, from the JEGS Allstars to the national event itself, we are extremely pleased with everything."

Perhaps knowing he needed a miracle launch to upset Coughlin's run, four-time champ Greg Anderson jumped the Christmas Tree by a massive -.038 seconds in the final, gift-wrapping the victory for Coughlin, whose 6.574 at 210.67 mph would have been tough to beat under any circumstance.

"It feels like we finally turned corner and it felt great to get by Greg in the final," Coughlin said. "Obviously, he's such a great competitor of ours, both off the track in the performance world and on the track every weekend. We've gone head to head hundreds of times, without question. To ride by that tree knowing I saw him turn it red had me feeling great all the way down the racetrack."

Troy Jr.'s luck finally ran out against eventual race winner Joey Severance, who ran a 5.221 at 278.58 mph to beat a tire-smoking Troy Jr. Debris on the track gave Troy Jr. no top-end data but his car was drifting by that point.

"Coming off a win at our last race we were full of confidence this weekend," Troy Jr. said. "As much as we wanted to with the JEGS Route 66 NHRA Nationals, beating two top cars and making it to the semis was pretty good. I have the best team in the sport and we will continue to get better every race.

"Congrats to Uncle Jeg on his win. He's always been my idol and the way he went through the Pro Stock field today was very impressive. I'm super happy for him."