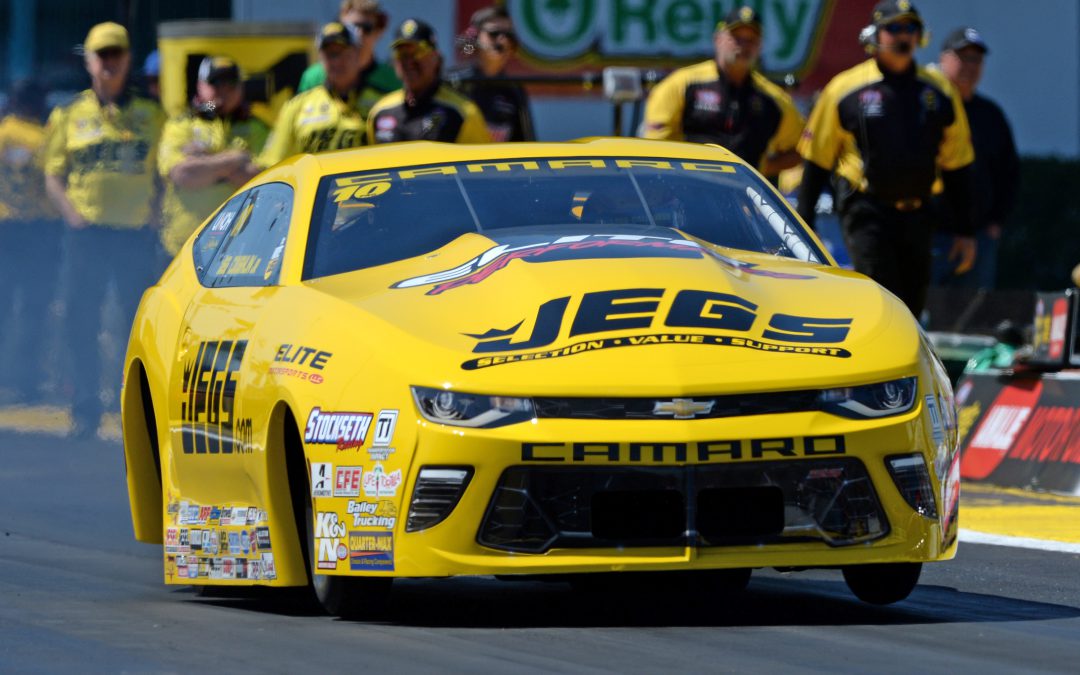 GAINESVILLE, Fla. (March 18) — Six-time world champion Jeg Coughlin Jr. has spoken at length about the supreme confidence he has in his brand-new Rick Jones-built JEGS.com/Elite Performance Chevrolet Camaro since he took delivery of the racecar in January. This weekend at the 48th annual Amalie Motor Oil NHRA Gatornationals, Coughlin is letting his car do the talking.

In an impressive 6.491 seconds at 214.01 mph, Coughlin locked up the No. 4 slot on Sunday's elimination ladder, marking his best starting point in eliminations since just after he joined Richard Freeman's Elite Motorsports group in the summer of 2015. The run was also his best since NHRA mandated a switch from carburetors to fuel injection at the start of 2016.

"We ran really well coming out of the box on Friday," Coughlin said. "Conditions were a little bit different yesterday, with a little bit cooler track temperatures, which helped. Today, it was still pretty cool but there was some pretty strong sun on the track and it affected our set-up a little bit.

"We ended up aborting Q3, which surprised us all, quite honestly, as good as the car has been running in testing and the first two runs here. We made a few adjustments for Q4 and definitely got the car much happier. It pretty much drove right down the track. That last run was real conservative, as it turns out, so we’ll be able to tune from there and settle in on a good spot for tomorrow that'll help us turn on four win lights."

A two-time Gatornationals winner, Coughlin will start his run to a possible third Gainesville title opposite Kenny Delco, who carded a 13th-best 6.561 at 212.33 mph. The massive .070-second difference between Coughlin and Delco's qualifying times is one of the biggest Coughlin can remember in his career, although he's still a bit leery of what could happen on race day.

"In 99 percent of my Pro Stock career, the most you ever had on a competitor was maybe 3-4 hundredths of a second," Coughlin said. "To have seven-hundredths is unheard of, but no matter what we won’t take anything or anyone lightly.

"Our goal is to get out there and see if we can’t be about .025 on the tree and at or near low ET for each round. We are definitely capable of doing that. We showed that with our back-half numbers and our top speeds in the first couple of runs and we’ll get it back there tomorrow. If we do that, we’ll have a good ride for the day."

Away from Pro Stock, Coughlin raced his JEGS.com Corvette roadster to Round 3 of Super Gas before being eliminated.