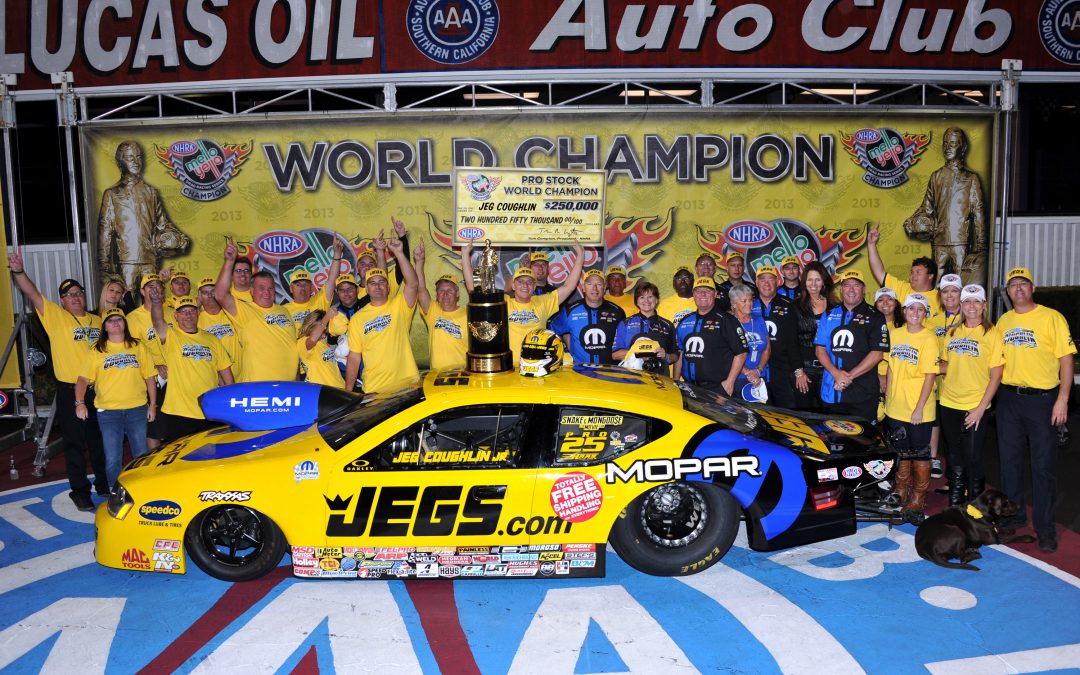 Coughlin became just the eighth driver in NHRA history to win a fifth professional championship, as he earned previous Pro Stock titles in 2000, 2002, 2007 and 2008. As a sportsman driver, Coughlin also won the NHRA Super Gas championship in 1992.

"This championship is extremely special to us, without question," Coughlin said. "When I stepped away from professional racing at the end of 2010, I honestly wasn't real sure how quickly I'd get back in the seat. But shortly thereafter, we put a great program together with our friends at Mopar to run a Dodge Avenger for the '12, '13 and '14 seasons.

"We didn't rest too long. We transitioned to racing with Allen and Roy Johnson and the J&J horsepower they make and it's been a great relationship."

Coughlin sat out the 2011 season, but returned with a vengeance in 2012. For this season, he joined Allen Johnson as a teammate at J&J Racing, and Roy Johnson's handmade horsepower put Coughlin over the top. He won four races in eight final-rounds this year, taking over the points lead after a victory at Reading, Pa., in the fourth of six Countdown to the Championship races.

He never looked back and officially clinched the title when Jason Line lost in Sunday's second round.

"To bring a second straight championship back to Auburn Hills for our friends at Mopar and another one to Greeneville, Tenn., for the J&J Racing crew, and now a seventh overall world championship to Delaware, Ohio, for everyone at JEGS, it feels fantastic," Coughlin said. "It ranks right up there at the top."

"In this day and age, it is so tough to win out here," Coughlin Jr. said. "We've seen a lot of races won and lost by just a few thousandths of a second. I think this is one of the tightest, and one of the most intense championships I've ever won. This ranks right up there with 2007 when we had the two cuts to the Countdown to One in the first year of our playoffs."

Coughlin qualified No. 4 at this race and had to take on teammate Vincent Nobile in the first round. Nobile had beaten Coughlin in three final rounds this season, including the season-opener here in February.

But Coughlin and his crew were up to the task, as Coughlin had a solid .031-second reaction time and outran Nobile with a pass of 6.544 seconds at 211.26 mph.

"When I saw we had Vincent, I thought, 'Aw, man, here we go,'" Coughlin said. "He's had my number this year, cracked me in all three of the finals we had. Knowing I had him, though, was probably a little bit of a blessing. I knew I had to bring my A-game, and the team prepared the car extremely well."

Coughlin was in the next pair behind Line in the second round, so he knew he had clinched the title before he raced Johnson. Maybe because of that thrill, Coughlin tripped the starting beam -.001 seconds too soon, giving Johnson the round win.

"We obviously wanted to win that round," Coughlin said. "I really felt like we could be somewhere between .010 and .014 on the Tree. I saw where Jason got beat – most of us were shocked at that outcome – and I think I was just ice-cold and relaxed and turned the red light on by one-thousandth."

But the championship was already his, and now all that's left to do is celebrate.

"It's been a long road this year," Coughlin said. "Very tense, very stressful, but that's what we love about it, right?"