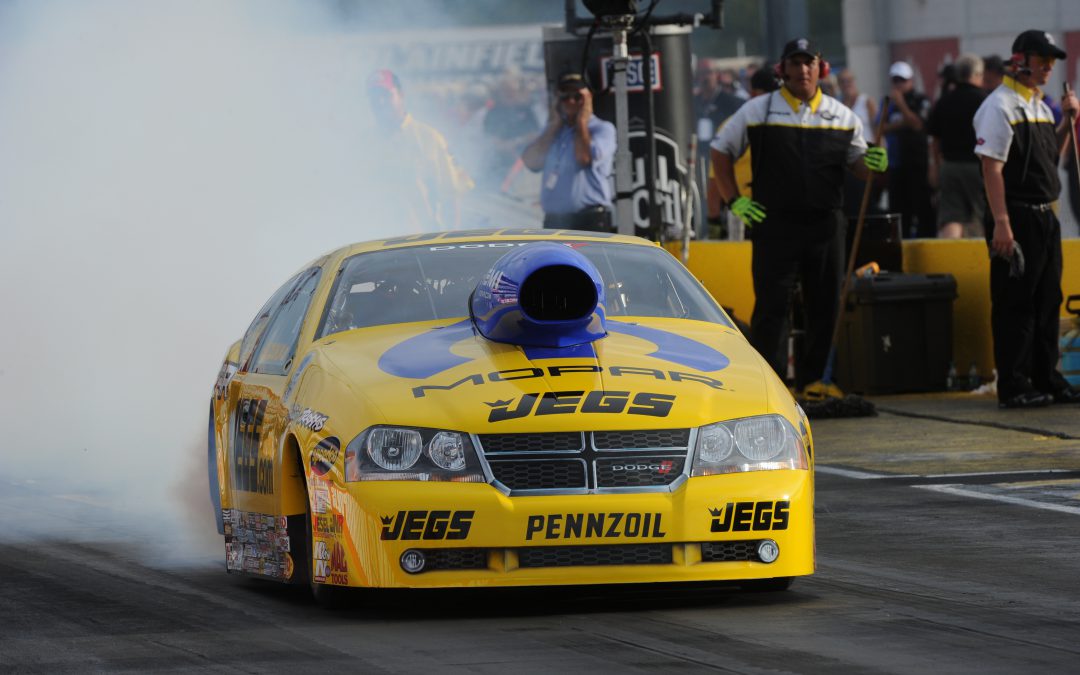 INDIANAPOLIS (Sept. 8) – It's taken a lot longer than expected, but Jeg Coughlin Jr.'s mission of getting the JEGS/Mopar Dodge Avenger into the Countdown to the Championship is nearly complete.

"It's going to be a fun day on Sunday," Coughlin said. "We want to etch our names into that Top 10, and seal a spot in this Countdown. It's what we've been working hard for all season and it's within our reach."

Coughlin took full advantage of the extra qualifying sessions at the rain-delayed 58th annual Mac Tools U.S. Nationals moving the JEGS Dodge up from 12th to eighth place on the qualifying ladder and all but locking up a spot in the Countdown in the process.

"We wanted to make sure we got into the field solidly," Coughlin said. "Eddie (Guarnaccia, crew chief) and the team did a really nice job of getting the car down the track both runs today."

"The second run today, we were really going after it," Coughlin said. "We wanted to get more aggressive with it. We overstepped the line just a hair down low in first gear. It slowed us up a hundredth or two.

"We still need to get a little more efficient with that scoreboard. All those 6.55s look pretty hateful, I can promise you we will fight this fight and we'll see if we can come out on the good end tomorrow."

The Coughlin/Brogdon pairing has countdown implications because Shane Gray and Ronnie Humphrey both failed to qualify and dropped out of the Top 10, which pushed Coughlin into the 10 spot. The only driver outside the Top 10 with a mathematical chance to pass Coughlin is Brogdon, and Brogdon needs to win the race outright to knock Coughlin out.

"Being qualified eighth is a tough to work from," Coughlin said. "You have a tough competitor right off the bat in the No. 9 car, and if you win that you are up against the winner of Nos. 1 and 16 in the second round.

"Right now we just need to keep our heads down, make the right calls and make some good runs tomorrow. The rest should take care of itself."

Eliminations for the 58th annual Mac Tools U.S. Nationals presented by Auto-Plus gets under way at 11 a.m. Sunday from Lucas Oil Raceway.