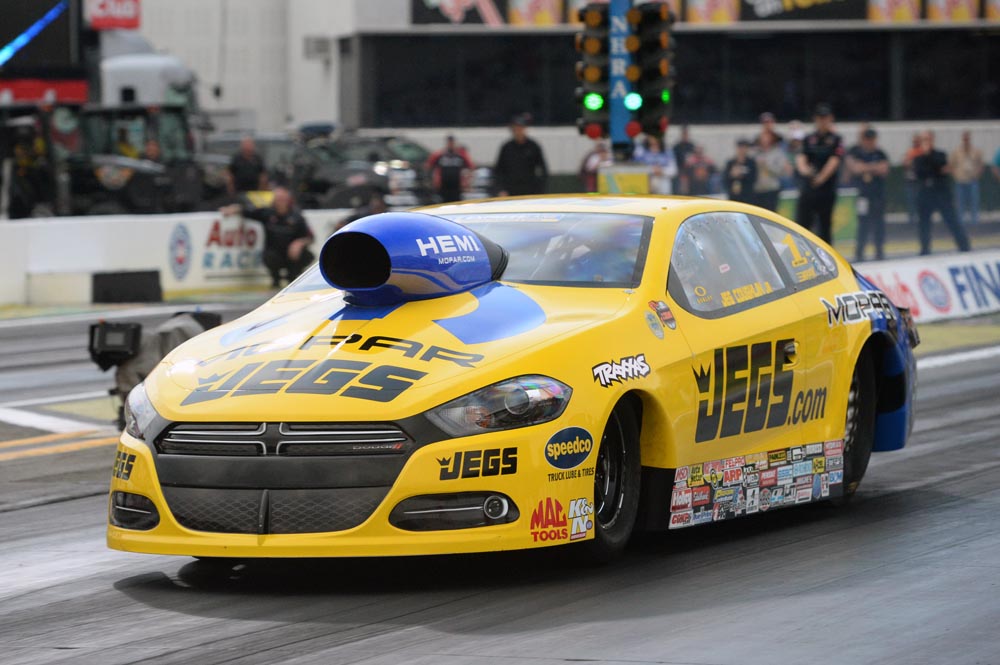 Looking to leave the season finale with the Wally, Coughlin's JEGS.com Mopar Dodge Dart looked consistently fast throughout all four qualifying sessions. With his best time of a 6.534-second pass at 211.89 mph occurring during Q3, Coughlin secured the No. 4 spot on the elimination ladder.

"Going into the last day of the season," Coughlin said, "we really made four good runs. Both runs today, we were looking to get maybe a little bit more out of them than we did. The car moved in opposite lanes both runs, in the left lane it went left a little bit and in the right lane it went right a little bit.

"I think (crew chief) Adam (Hornberger) and the guys will do a good job to navigate that part of it and we'll wait to see what Mother Nature shows up with for tomorrow."

Facing off against No. 13 V. Gaines during round one of eliminations, Coughlin is confident in his chances of getting the job done one more time in the 2014 season and for the seventh time at Pomona.

"I like the way we're running going into game day," Coughlin said. "I feel great behind the wheel and that's what it takes win out here in Pro Stock. We've got a great team and are feeling good. Let's get it done now."

Already accumulating 74 total national event wins and 99 Pro Stock final-round appearances, the six-time champion is looking forward to his chance at continuing to make history and notch those statistics up a mark.

"Stats are cool when you hear them spoken like that," Coughlin said. "We'd like to reach that centennial mark of final round appearances but would love nothing more than to light up that win light and send the year out in firework style, all while having a good time doing it."

Eliminations will start at approximately noon, Sunday, with both qualifying and elimination action broadcast on ESPN2 on tape-delay basis.