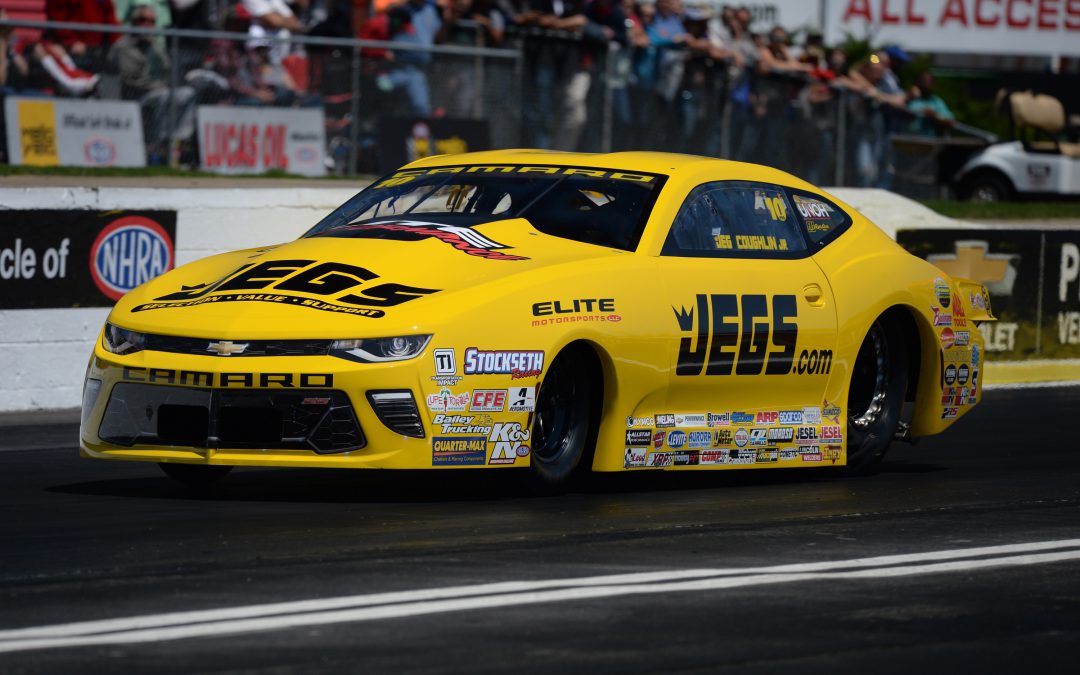 TOPEKA, Kan. (May 16) — Six-time world champion drag racer Jeg Coughlin Jr. knows his JEGS.com/Elite Performance Chevrolet Camaro has been running well all year. He also knows it's been getting even better over the last few national events, which has him thrilled to be heading to Heartland Park Topeka for this weekend's 29th annual Menards NHRA Heartland Nationals presented by Minties.

"We're really excited about the first seven races and are very much looking forward to this middle stretch of the 18-race regular season to climb further up the rankings," Coughlin said. "The entire Elite Motorsports race team has picked up a bunch of momentum the last few races with our team logging a runner-up finish in Houston, a couple of No. 1 qualifying efforts in Houston and Charlotte, and my teammate Erica Enders getting to the finals last race in Atlanta.

"The points are adding up and we all know these middle races count just as much as the ones nearer the end of the regular season when everyone is jockeying for playoff spots. It's important to maintain our focus and continue working hard."

Coughlin, a five-time Pro Stock world champion who also won the 1992 Super Gas title, is right in the thick of a very crowded Mello Yello Pro Stock point standings. He currently ranks fifth, one point behind fourth-place Tanner Gray, one round behind third-place Jason Line, and just 91 points off Greg Anderson's class lead.

Topeka should be a great place for Coughlin to make an upward move as he's claimed three national event victories at Heartland Park, two in Pro Stock in 2000 and 2013 and once in Super Stock in 1994.

"Topeka's a track that is usually very good," Coughlin said. "Having had success in both the pro and sportsman ranks there in the past certainly gives me a dose of confidence.

"Looking at the forecast we may need prepare for lots of weather changes, which can be a real test for the crew chiefs, but our gang of Mark Ingersoll, Rick Jones and Brian Self work really well together, as witnessed by the success we've been enjoying."

When not racing himself, Coughlin will be supporting his brother Troy, who races in Pro Mod, and his nephew Troy Jr., who competes in Top Fuel.

Prior to the race, Coughlin will be taking in the NCAA regional golf tournament at Stanford University in the San Francisco area, where his son Jeg III is competing along with his teammates from The Ohio State University.

"We're always pulling of Troy Jr. every weekend and it's been fun to have him out on the pro tour full time," Coughlin said. "Pro Mod added Topeka to its schedule this year so we'll have brother Troy along with us this time, which will be fun.

"I'm super proud of my son and his teammates. This is the best the OSU team has done in a while so to reach regionals and have a chance to advance to the finals is very exciting for all of them. I'll be there this week to show my support and then I'll hustle over to Topeka for the races. It's time for an Elite win."

Pro Stock qualifying sessions are scheduled for 3:30 p.m. and 6:30 p.m., Friday, and 1:30 and 4:30 p.m., Saturday, with eliminations starting at 12 p.m., Sunday. Television coverage on FOX Sports 1 begins at 10 p.m., Friday, followed by a live qualifying show at 2 p.m., Saturday. Elimination action also will be shown live starting at 1 p.m., Sunday. (All times are local and subject to change).