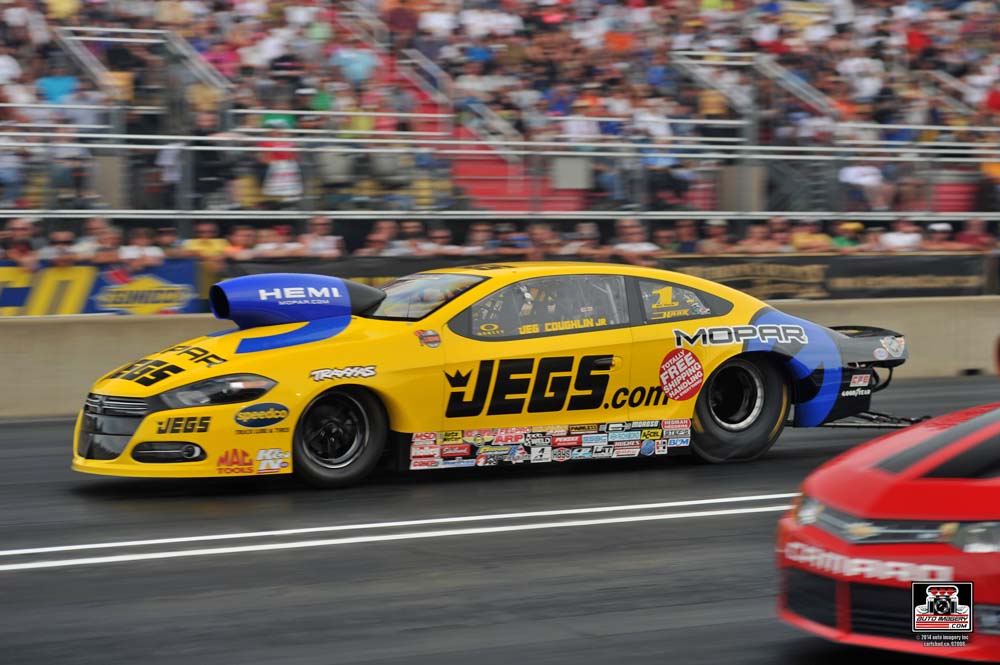 But there was a gleam in his eye when he thought about his chances at winning the Mello Yello Drag Racing Series event Sunday in his home state.

"I really think we have a good shot at it," Coughlin said. "I’m not usually the one to speak overly optimistic, and I'm always an optimistic fella, but I feel good about our chances tomorrow."

"I’m confident going into tomorrow," Coughlin said. "We ran a little different set of tires during Q3 in preparation for tomorrow, and I think we're going to be one of those dark horses. We know we've got the power under the hood, we know we can make the right calls in the pits and on the track, and I know I can hop behind the wheel and do what I love to do. It should be a great day tomorrow."

"That was fantastic," Coughlin said. "Nothing will ever match that feeling quite honestly. Not because it was my first race – that certainly helps – but all of our family was there, a lot of our friends were there, and a lot of folks from JEGS were there. We really had a celebration. A win here at Norwalk would be awesome."

Coughlin brings a consistent Dodge Dart into race day, as his first three passes in qualifying were within .041 seconds. His Q4 run started well and could have been his best of the weekend.

"The car left really, really solid," Coughlin said. "We probably had one of the better short times of the round, and we were ahead of Erica (Enders-Stevens) by five-thousandths to the 330, and it was trucking pretty nice. It was probably going to run .53 by the looks of it, but woulda, coulda shoulda, right?"

But Coughlin had to push the clutch in before the finish line after the car moved out of the groove.

"We found a few minor things that were helping the car go left, as it did the last two runs," Coughlin said. "We made some adjustments there. We were hugging the far right side of that lane, and any imperfection to the right wasn't going to be a good deal."