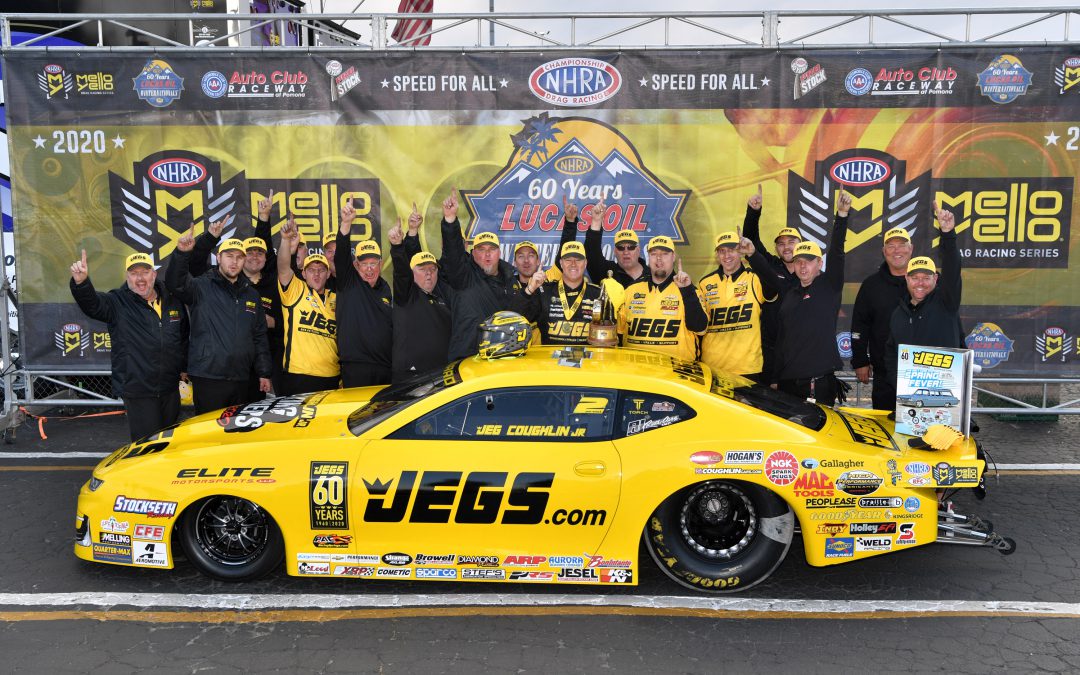 POMONA, Calif. (Feb. 9) — Jeg Coughlin Jr. began the 2020 NHRA season with a dominating run at the 60th annual Lucas Oil Winternationals, posting low elapsed time of every round in both qualifying and eliminations to secure his 64th Pro Stock trophy.

Coughlin's perfect performance earned him the maximum of 130 points to put him clearly in front of the class. It was a rare mastery of a category where qualifying positions and race wins are usually decided by a few thousandths of a second. Coughlin's closest contest Sunday came in the final where Jason Line crossed the finish line .034 seconds behind Coughlin's JEGS.com Elite Motorsports Chevrolet Camaro.

"This might be the most dominant single race I've had in my 23 years of racing in Pro Stock," said Coughlin, who earlier this weekend announced this would be his last full-time effort in the professional ranks. "Just an incredible run from the first qualifying session right through to the final, we just had an extremely fast car.

"It's extremely exciting to kick off the 50th year of Pro Stock with a win at the 60th annual Winternationals in a racecar that salutes the 60th anniversary of JEGS. Rickie (Jones, crew chief) and everyone in the JEGS pit and at Elite Motorsports in general did an outstanding job."

Auto Club Raceway in Pomona is now far and away the best track on the tour for Coughlin, who has eight wins at the facility, including three at the Winternationals. He also has seven runner-ups here. Additionally, Coughlin won last year's NHRA Finals.