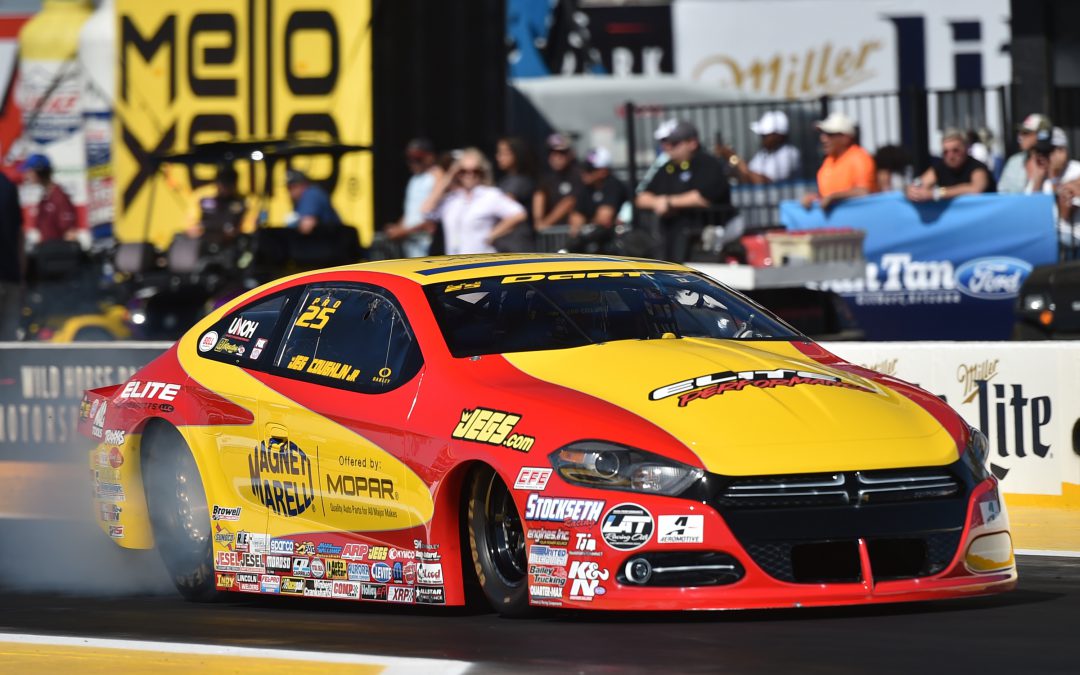 PHOENIX (Feb. 28) — Five-time Pro Stock champion Jeg Coughlin Jr. scored another round-win with his new Magneti Marelli offered by Mopar/JEGS.com Dodge Dart, but he bowed out in the second round of the CARQUEST Auto Parts NHRA Nationals on Sunday at Wild Horse Pass Motorsports Park.

Coughlin's Elite Motorsports team built a Dodge for the 2016 season, with all-new fuel-injected engines limited to 10,500 rpm. With that much change, a lot of time is needed to be competitive, but Coughlin still won a round at the season-opener in Pomona, Calif., and here in Phoenix and knows even better times are ahead.

"We'll gather everything together and everything is in one piece, which is extremely exciting," Coughlin said. "I know the Elite Performance guys and the SRT engineers are joined at the hip, and that's exciting, too. We're really looking to improve the performance of this Hemi, and I feel like we've got some great opportunities to do so."

"We made some more changes in the program coming into round one today, and the car seemed like it responded really well," Coughlin said. "We went a .065, which we weren't doing cartwheels about, but the way the car responded, we were pretty eager to get back up there for the second round."

"We made a few more changes, but we just need a little more," Coughlin said. "We were behind by .017 on the run to Jason there, and certainly I had enough room on the starting line to have picked up that much, but it just wasn't meant to be.

"We massaged the car from top to bottom, front to rear, and side to side. We never really seemed to hit a home run with it, so we'll go back and make some brute power, and that will solve a lot of issues."

FOX Sports 1 will air live coverage of eliminations from 2-5 p.m. PT, Sunday. More than 1.1 million viewers tuned in to the first broadcast of the season.