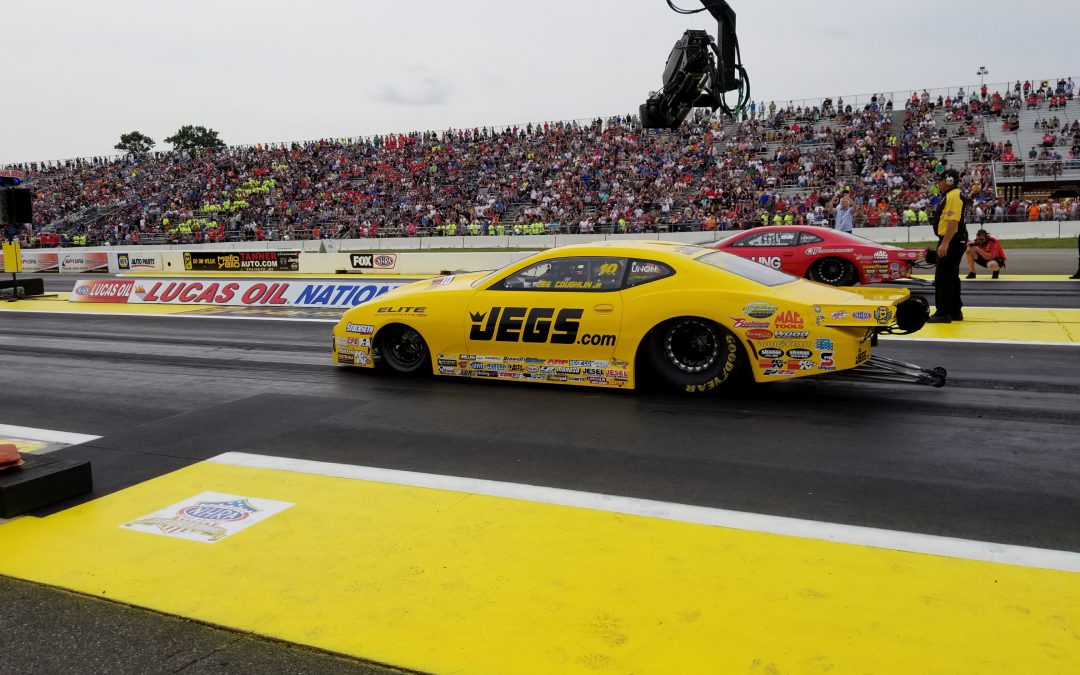 BRAINERD, Minn. (Aug. 20) — Jeg Coughlin Jr. ran his best quarter-mile pass of the weekend in the opening round of the 36th annual Lucas Oil NHRA Nationals. He also left the starting line with a stellar .009-second reaction time. Unfortunately, neither feat was enough to give his JEGS.com/Elite Performance Chevrolet Camaro team the victory against stablemate Erica Enders, who also had her best pass of the weekend and recorded an even better .003-second launch.

"We made a lot of changes on both cars overnight and tried very hard to make them as similar as possible today, being team cars and all, "Coughlin said. "I wanted to be somewhere between .004 and .012 on the Tree and had a .009, but I still left second and crossed the finish line second. It just didn't pan out for us by four-thousandths of a second.

"In the bigger picture, we still have some pecking to do on the combination we ran today. It did show promise as far as getting the car up and going in first gear and obviously looking at our times the tune-ups we very, very close. Hopefully Erica will continue to pick up as the day goes on here. That will be exciting to watch."

Although the cars were virtually side-by-side all the way down the track, Enders managed to stay a few inches ahead of Coughlin through the finish line, posting a 6.659 at 207.78 mph to Coughlin's 6.657 at 207.66 mph.

Coughlin and crew will have a weekend off to take a breath before the longest-running and most prestigious race in drag racing, the 63rd annual Chevrolet Performance U.S. Nationals, takes center stage Sept. 1-4 at Lucas Oil Raceway in Indianapolis.

"Indy's been a great place for us over the years and we've made a lot of fun memories there. It would be a real Cinderella story to see us pull off a win this time through with the year we've had."

To that end, the entire Elite Motorsports team will head to St. Louis for some pre-Indy testing.

"I'm excited for testing," Coughlin said. "It feels like we're getting closer to where we want to be and testing will only help us on our journey. Indy is big, and then the playoffs start, so it's time to shine."