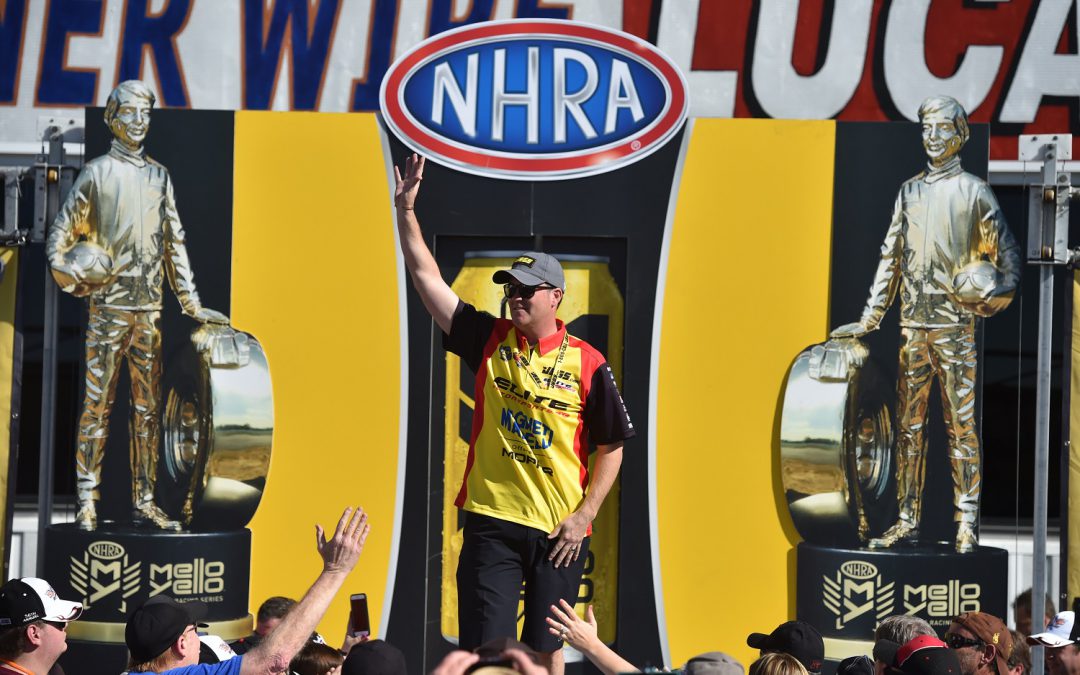 LAS VEGAS – Five-time NHRA Pro Stock world champion Jeg Coughlin Jr., driver of the Magneti Marelli by Mopar/JEGS.com Dodge Dart, has been selected by the fans as the K&N Horsepower Challenge Fan Vote winner and will fill the No. 8 starting spot in the lucrative Pro Stock bonus event.

The 32nd annual K&N Horsepower Challenge will be conducted during the DENSO Spark Plugs NHRA Nationals on Saturday, April 2 at The Strip at Las Vegas Motor Speedway. The event will be televised by FOX Sports 1.

Coughlin is a three-time winner of the K&N Horsepower Challenge, his most recent victory coming in 2009. This will be his 13th start in the popular Pro Stock all-star event.

“This is very exciting to be voted the fan seed of the 2016 K&N Horsepower Challenge,” Coughlin said. “A BIG thanks goes out to all of our friends and fans that helped us reach this goal. I was actually seeded to race in the 2015 K&N Horsepower Challenge, but was not racing Pro Stock last season and even though I had a couple of teams offer cars to drive for the event I ended up opening my spot to another Pro Stock racer.  So, it feels great to be back in action at this year’s event and would love nothing more than to add a fourth Horsepower Challenge trophy to our mantle.”

Coughlin will face No. 1 seed Greg Anderson in the opening round of eliminations.

“I was talking to Richard Freeman and everyone at Elite Motorsports is ready for the event," Coughlin said.  "We are returning to the event as winning the past two K&N Horsepower Challenge events with Erica Enders, and have three shots to claim the trophy this year with Erica, myself and teammate Drew Skillman; it will be exciting for sure.”

The K&N Horsepower Challenge is a race within a race, highlighting the top drivers in NHRA Pro Stock competition, for which the winner receives $50,000. The runner-up will earn $10,000, the two semifinalists will each receive $3,000, and the four first-round finishers will each take home $2,500. As part of the program, a $3,000 bonus is awarded to the No. 1 qualifier at each NHRA Mello Yello Drag Racing Series event.

K&N Horsepower Challenge rounds are scheduled for 1, 4 and 5 p.m. on Saturday, April 2.

Tickets for the DENSO Spark Plug NHRA Nationals, April 1-3 at The Strip at Las Vegas Motor Speedway, are available by logging on to www.lvms.com or by calling (800) 644-4444.