Jeg Coughlin Jr. encouraged by gains made since season opener 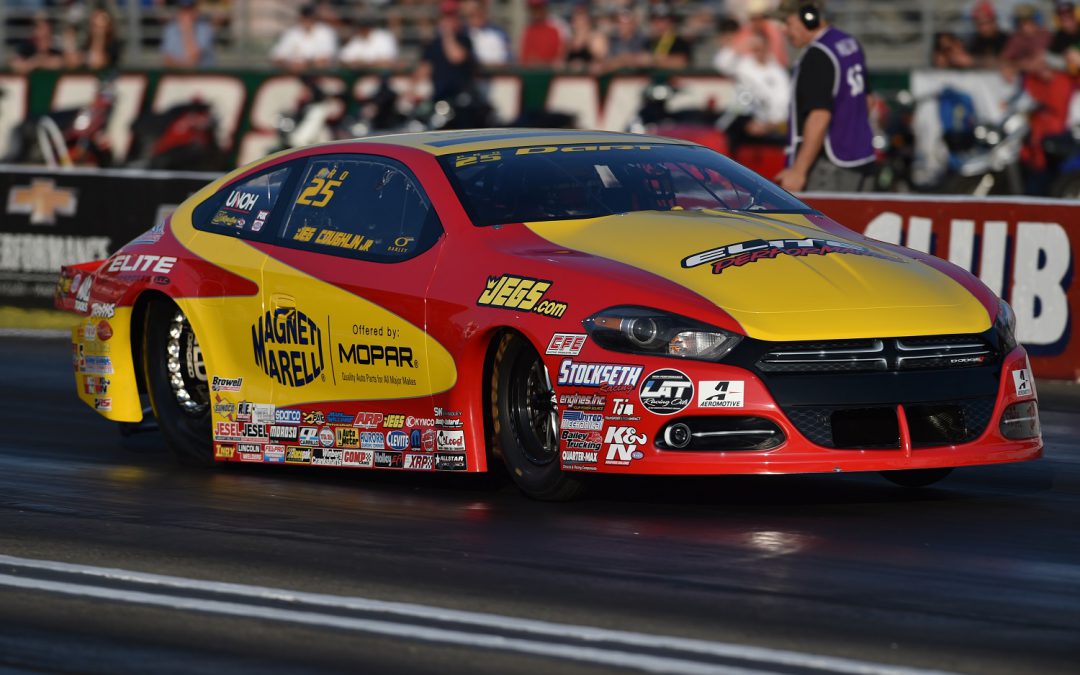 PHOENIX (Feb. 22) — The high-powered braintrust in the engine department of Elite Motorsports has been working around the clock since their brand-new Hemi motors arrived at their race shop following the season-opening Winternationals. Driver Jeg Coughlin Jr. says all that overtime work should start to pay dividends this weekend at the Carquest Auto Parts NHRA Nationals at Wild Horse Pass Motorsports Park.

"Nick Ferri, Jake Hairston, Lump (Brain Self), Mark Ingersol and Rick and Rickie Jones, I'd match that group up against any braintrust in the history of our class," Coughlin said. "They've been itching to get these Hemis on the dyno and work their magic and they finally got the chance after Pomona. We didn't have to ask them to stay late; it was more like we couldn't get them to leave.

"We had an okay start to the season but the Hemi motors we used there had literally just been assembled. There was simply no time left to test or dyno anything so the guys put in their best effort and we did the best we could under the circumstances. Now we've had the time to make several pulls on the dyno, which has allowed them to really zero in on what we need to be on top."

Everyone in Pro Stock used the off-season to adapt to the newly-mandated rules implemented by the NHRA, including fuel injection, 10.5K rpm limitations and shorter wheelie bars, which affect the balance of the cars during the crucial launch phase.

Adding to that stress for the Elite Motorsports team was a massive switchover to Mopar horsepower and Dodge Dart racecars for Coughlin and teammate Erica Enders.

"Switching manufacturers is tough to do under ideal circumstances," Coughlin said. "To try and do that while also dealing with arguably the biggest change in Pro Stock history was monumental. Most people don't know our deal with Mopar wasn't inked until really late in the season so it's been a real scramble for our guys. My hat's off to them."

Coughlin is a five-time Pro Stock champion with 58 national event victories in the category. Two of those wins came at Wild Horse Pass Motorsports Park, the first in 2000 and the most recent in 2009.

"Optimally, we'll ring up No. 3 there this weekend and get the first for this Magneti Marelli offered by Mopar/JEGS.com Dodge Dart," Coughlin said. "If they handed out trophies for hard work, this crew would already have a few this year. These guys have been working so hard for Erica and I and the best way we can thank them is to win races. That's why we're all out here fighting."

FOX Sports 1 will air qualifying from 7-9 p.m. PT, Saturday, with live coverage of eliminations from 2-5 p.m. PT, Sunday. More than 1.1 million viewers tuned in to the first broadcast of the season.