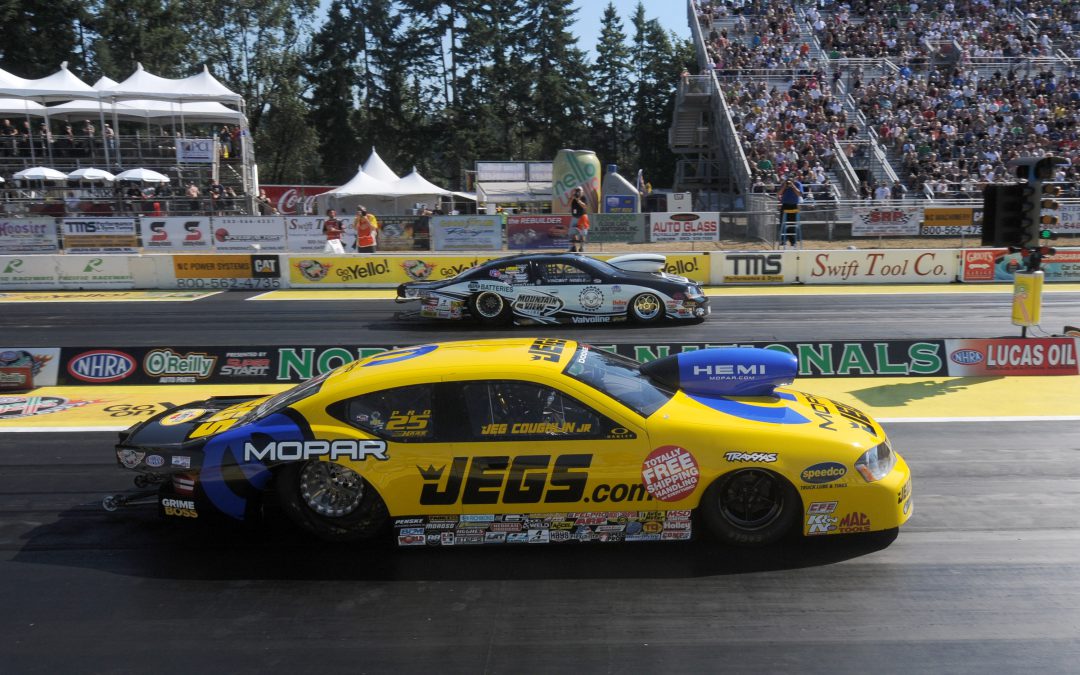 SEATTLE (Aug. 4) – JEGS.com/Mopar Dodge Avenger driver Jeg Coughlin Jr. raced to his second consecutive final round – and the 91st of his brilliant Pro Stock career – in the NHRA Northwest Nationals on Sunday at Pacific Raceways.

But the four-time class champion wanted more after falling in the final to J&J Racing teammate Vincent Nobile for the second week in a row.

"We had great showings, being in the last two finals," Coughlin said. "But we're here to win the trophy, and we came up a little short of that today.

"It was a hustle, it was a thrash, and I commend the whole team. We had a lot of Mopar guys from (teammate) Allen (Johnson's) team on top of my car today from second round on, helping us with it. I thank them as well."

Coughlin and his team earned the final round with a lot of work, some terrific driving and a little bit of luck.

"I felt really good, really confident coming in to game day today," Coughlin said. "I felt like we'd pick up to the pack, but we really didn't. We kind of fumbled our way through it, to be honest."

That matched him up against Shane Gray in the second round, where fortune smiled on Coughlin.

"We had a pretty decent first round with that 6.58 we ran," Coughlin said. "We lost lane choice to Shane's 6.57, but he shook hard, thank goodness. I ended up breaking a clutch, of all things. I've never had that happen before. I was kind of dead in the water from about 500 feet on, and we hurt the motor on that same run, too."

Coughlin's pass was only 6.675 seconds at 202.58 mph, but Gray pushed in the clutch before half-track and ran 16.073 seconds at 50.28 mph to send Coughlin to the semifinals against No. 1 qualifier Mike Edwards.

Before then, however, much work needed to be done to the JEGS.com Avenger.

"When Mike came in and staged, he was flickering the stage beam pretty bad, and I had to really focus on not letting that distract me. It did distract me, no question about it, but I was able to get out first on him and never look back."

That set up a rematch of the Sonoma and Pomona finals, and Nobile again got the better of Coughlin, despite Coughlin getting the jump on the Christmas Tree (.032 to .045).

"We made some changes for the final to try to get the performance to run a high 6.50," Coughlin said. "We felt like if we could steal .01 or so from Vincent on the Tree that we could make a good run of it. We came up just a bit short for my car. But for J&J Racing, they ended up sweeping the Swing, with Allen in Denver and Vincent in Sonoma and Seattle.

"We'll kind of regroup and get everything cleaned up," Coughlin said.  "We're beaten and battered a little bit after the last 10 weeks or so. They've been a really, really long stretch. But we'll get ready for Brainerd."