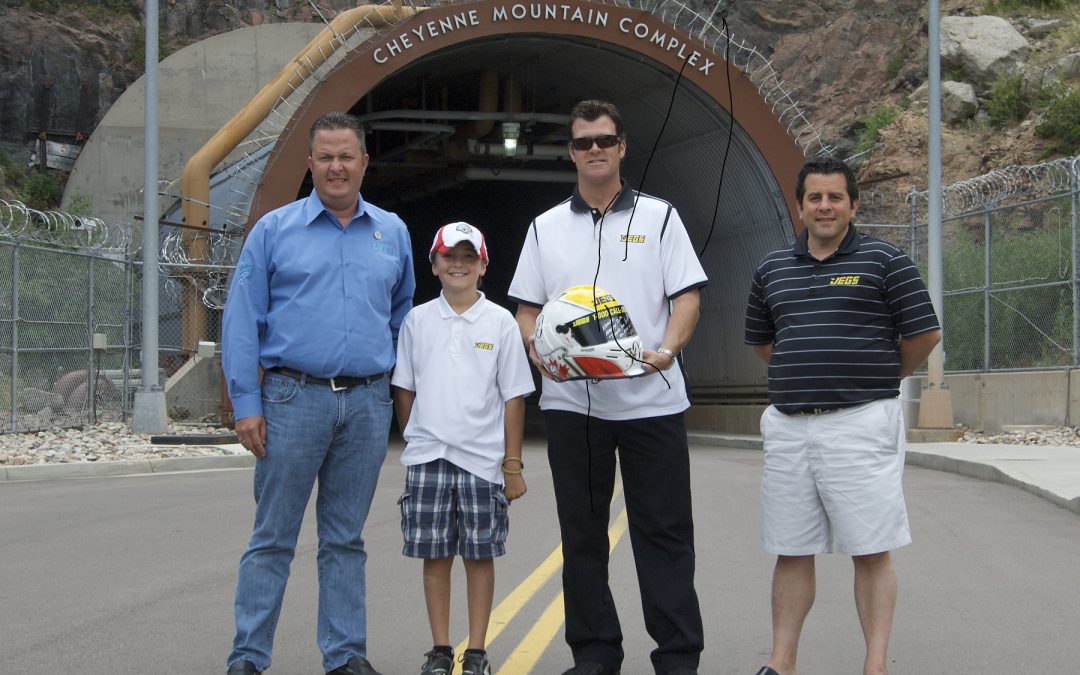 DELAWARE, Ohio (May 1) — When six-time NHRA champion Jeg Coughlin Jr., one of the most prolific drag racers of all time, was invited to a private tour of the North American Aerospace Defense Command (NORAD) inside the Cheyenne Mountain Complex in Colorado Springs, he jumped at the chance.

Conceived at the height of the Cold War of the 1950s as a fail-safe location against the threat of long-range Soviet bombers, the NORAD Combat Operations Center became the center of North America's aerospace defense when it opened in 1966. Together with our Canadian allies, NORAD has protected North America from attacks by sea, air and space ever since.

"Having the opportunity to visit a functioning top-level military installation like NORAD was very special," Coughlin said. "I know a few other NHRA pros have taken the same tour through the years but it's only been a small handful of us that got to go inside.

"It's pretty amazing the Army Corp of Engineers designed and built a place inside a solid mountain of granite that is nuclear bomb-proof, especially when you realize they started work back in the 1950s. The lengths they went to in order to protect our country and our Canadian friends is very impressive."

At the invitation of Lieutenant-General Charles Bouchard of the Royal Canadian Air Force, the Deputy Commander of NORAD at the time, Coughlin and friends Scott Woodruff and Nicky Morse, were escorted through the facility by Lt. Col. Brian "Bear" Lihani (USAF, Ret.), who for more than 20 years handled Air Defense Operations at NORAD.

"One of the really neat things before you ever enter the mountain is when you pass through the security area," Coughlin said. "They have a lobby filled with glass showcases holding all the gifts presented to NORAD personnel by the various VIPs and dignitaries who have toured the base. We were quite honored to add a special-edition helmet we had done up by Nick Pastura to commemorate our visit. It was very cool to see it placed among all the other mementos.

"Once you clear the very strict security protocols you hike down this tunnel into the middle of the mountain to a big right turn where the bomb-blast door is placed. This is a massive door that can withstand a nuclear blast, and as you may image it is very thick with piston-locks at all points around the door into the granite. As big as the door is, they can open and close it in seconds, which they demonstrated for us.

"Inside, they have the capability to operate for many years with a huge water reservoir, food stocks for the 2,000-plus people that would be needed inside during an emergency situation and all the other creature comforts they would need to stay operational."

The facility was put together in pieces small enough to get down the tunnel and make the turn into the massive cave system that was painstakingly carved out of the stone. The tunnel you enter actually goes all the way through the mountain and comes out the other side to allow the energy of a direct hit to blow right by the bomb door.

"Each small section inside is sitting on these giant springs," Coughlin said. "It's a suspension system that allows the buildings to move without breaking apart if the unthinkable were to happen. Inside those pods it's pretty much like any other office building except there are no windows to look out.

"They had these massive retention tanks holding water and huge caches of food. It's all still ready to go at a moment's notice, even though a lot of the military command has been relocated down to Peterson Air Force Base at the base of Cheyenne Mountain. They have duplicates of everything needed still inside should it be necessary to lock it all down.

"I can tell you when you're inside and they close and lock the door, it's a very interesting feeling. You feel super safe but also a little cut-off from the world, even though the main commanders in the hot seat 24/7 have hotlines right to the U.S. President and the Canadian Prime Minister."

Bringing the visit full circle, Coughlin and his JEGS.com team hosted Lieutenant-General Bouchard and his staff at the Mile-High NHRA Nationals that weekend.

"We saluted the men and women working at NORAD with some special badging on the car," Coughlin said. "It was the 50th anniversary of NORAD that year and we used that logo on the hot rod. General Bouchard got a real kick out of that and seemed to enjoy learning all about what we do in drag racing. Together with a general from the Army that was at the races that weekend, I asked both of them to sign a replica NORAD helmet I used and I have that in my personal collection. It's a great memory for our team."