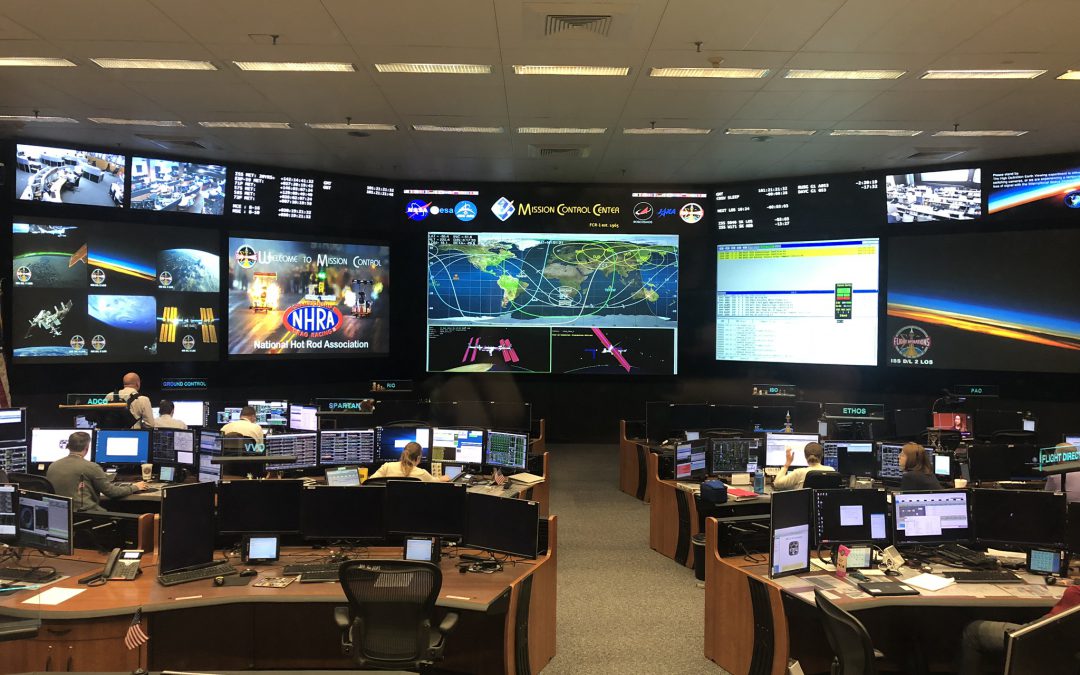 DELAWARE, Ohio (May 14) — With an annual stop in Houston each year, drivers on the NHRA drag racing tour have a great opportunity to visit NASA's Johnson Space Center, which has been the operational home of space exploration and flight for nearly 50 years. Always interested in the USA's space program, Jeg Coughlin Jr. took advantage of a special invitation to tour the facility, a memory he cherishes more now as his days of full-time professional competition are drawing to an end.

"We've all heard the line 'Houston, we have a problem,' from countless astronaut movies and this was a special chance to see where the folks on the other end of that distress call were all those years ago, plus so much more," Coughlin said. "When I was asked if I'd like a tour, I jumped at it, and I'm so happy to have had the chance to peek behind the curtain.

"The first thing you notice when you arrive on campus is that you're not just entering a big facility; it's more like a city. It's just overwhelming to see the assets on hand and to try and figure out the number of very intelligent people it takes to do their missions. It was a real treat to be there."

Johnson Space Center sits just 26 miles from Houston Raceway Park powered by Pennzoil, site of the annual Mopar Express Lanes NHRA SpringNationals, so it was an easy and worthwhile jaunt for the six-time world champion, who is currently ranked second in the championship points.

"We started off with a visit to the Saturn V building, which houses the most powerful rocket ever flown," Coughlin said. "It's laying on its side in this enormous hanger and it pretty much takes up the whole place. To think about what it took to build with the technology they had back when it was assembled in the late '60s and early '70s just blows your mind.

"There was another building adjacent to that one that housed all kinds of additional spacecraft, small little landing capsules, lunar rovers, a bunch of really neat stuff. Every wall seemed to be covered with so much history of the various Mercury, Gemini, Apollo, Apollo-Soyuz and Space Shuttle missions. They certainly show a great respect for the pioneers who made it to the moon and back using slide rules and such."

The tour continued to various training areas where modern-day astronauts are put to the test, as well as a trip back in time to the actual mission control room where NASA personnel heard those (slightly embellished) fateful words from Apollo 13 astronaut Jack Swigert. Swigert's actual transmission, as Coughlin learned, was "Okay Houston, I believe we've had a problem here," in regards to an onboard explosion that crippled their space ship.

"To sit in the seat the main engineer was in at that historic moment was really cool," Coughlin said. "That specific mission control room was deactivated after the Apollo era and they've kept it just as it was so you really get a feel for it.

"They also took us to a virtual gravity room where you get a bit of a sense of what it's like to be in zero gravity. Obviously, that's not possible on the surface of the Earth but you do get some idea of what it must be like. We were using the same equipment the actual astronaut trainees use.

"We also had a chance to visit a complete space shuttle they have on campus, and I had the honor of sitting in the driver's seat, as it were."

Since his hosts knew of his auto racing background, Coughlin was offered a rare chance to drive a prototype of a lunar rover, which ended up being the highlight of the trip.

"We actually took it out on the streets of Johnson Space Center and drove it around," he said. "It was pretty wild because it can go in any direction: forward, backward, sideways, diagonally, whatever you wanted. You could get yourself dizzy in a hurry if you weren't careful. That thing made my Pro Stock car feel stable. It was a lot of fun, for sure, and cool of them to let me have a rip around the block."

As always when visiting Houston, Coughlin concluded his special day by taking his JEGS.com crew to Lupe Tortilla's Mexican Restaurant, a favorite stop each year.

"My buddy Stan Holt and his wife Sheila-Mae always take great care of us and it was a good place to tell all the neat stories we had from our incredible day at NASA," Coughlin said.