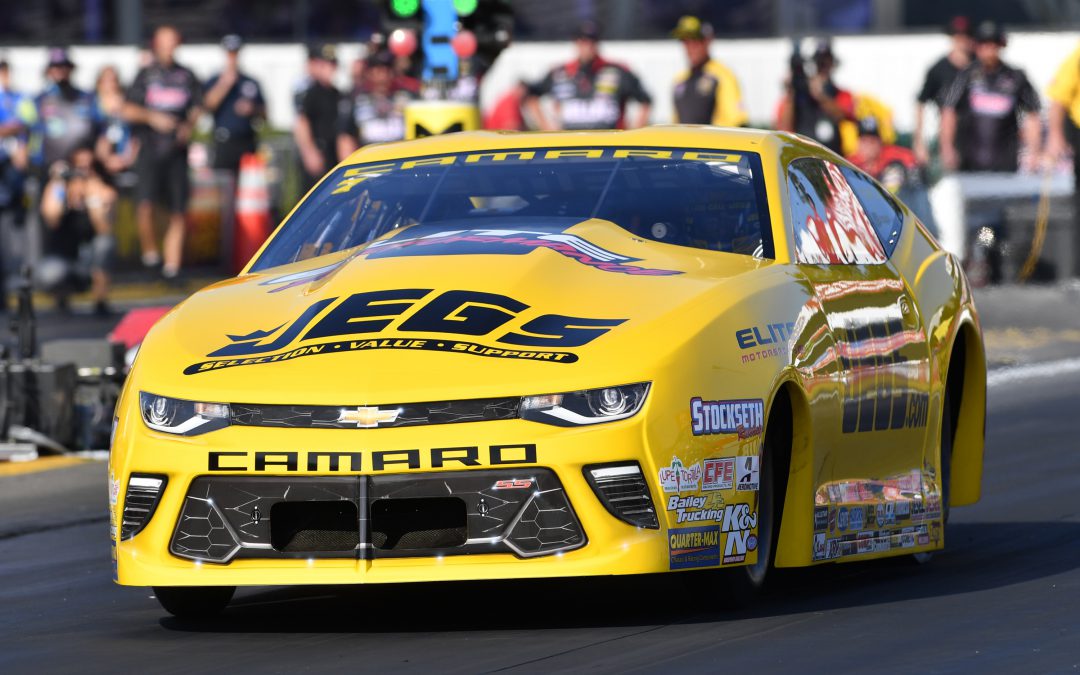 POMONA, Calif. (Feb. 11) — Jeg Coughlin Jr. will have to wait until the fall to try for a seventh victory at historic Auto Club Raceway in Pomona after dropping a close Round 1 race to Elite Motorsports teammate Erica Enders.

"We had a really good drag race," Coughlin said. "Erica got her foot off the clutch just a tick quicker with an .018 on the tree, I was .031, just thirteen thou behind her. We both ran 6.59s so I just got nipped by a hundredth or so, about the margin of difference in reaction time.

"The JEGS.com/Elite Performance Chevrolet Camaro honestly felt really good and sounded good. Most of the ETs in Round 1 were around 6.55, 6.56 so we are still lacking in performance and efficiency somewhere. We will start looking at the data from the on-board computer and see what we see there and obviously see if we can’t get Erica’s car tuned up better for Round 2. We are certainly capable of running at the front of the pack. We just need to get there."

Elite Motorsports fields four cars, with team drivers Vincent Nobile and Alex Laughlin also advancing out of the first round. It's a good sign for the entire team and something Coughlin and the JEGS.com crew can take as a positive.

"I'm excited whenever any of the cars advance so to have three moving on here is great," Coughlin said. "At the same time, I think we will all agree that we just gotta have better performance overall as a team. This group did a lot of testing in the off season and were faster than heck in both Florida and Arizona but we came out here and we weren’t as fast as we wanted to be. I’m not saying the testing was for naught but it certainly didn’t show up for us here in Pomona, at least not yet.

"We’ve still got a couple of rounds left with Erica’s car that’s pretty much a twin to mine to see if we can’t get something sorted out and see if we can get some momentum picked back up before we get to Phoenix in a couple of weeks. We'll be cheering for Vincent and Alex as well."

Up next, the NHRA tour heads east for the 34th annual Arizona NHRA Nationals, Feb. 23-25, at Wild Horse Pass Motorsports Park. The Elite Motorsports team tested extensively at the facility prior to the start of the season.

"As I said, we were quick in testing at Phoenix, again right in the same range as Erica and her car, so we feel very comfortable going back there for this race," Coughlin said. "The guys have a few days off to see what we can do to pick away at the car and the tune-up and I expect we'll be very competitive there."