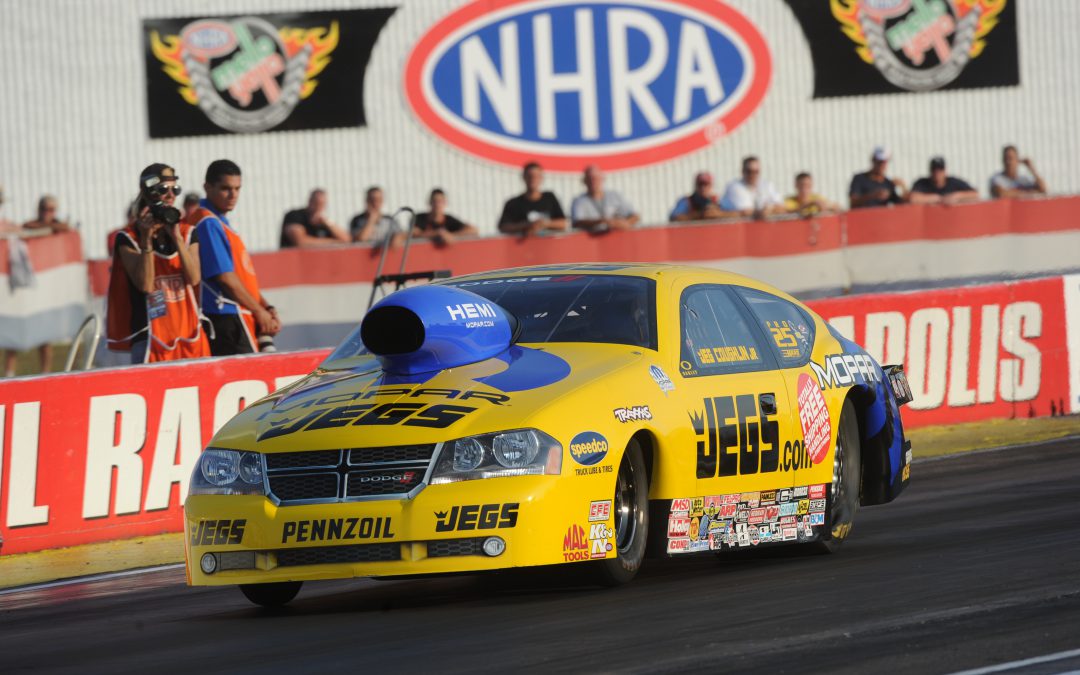 INDIANAPOLIS (Sept. 2) – Despite not being the guy leaving Lucas Oil Raceway with the Pro Stock trophy, Jeg Coughlin Jr. is leaving the NHRA U.S. Nationals a pretty happy guy.

Coughlin guided the JEGS.com/Mopar Dodge Avenger to a semifinal finish Monday, beating Rodger Brogdon and Shane Gray before losing to V. Gaines in the semis.

"It looked like we had one of the best cars to a couple hundred feet," Coughlin said. "We were just losing it a little bit (downtrack) after that. They made a big change on my teammate's (Allen Johnson) car before his second round matchup, and he ran a really nice 6.63.

"They made that change in my car for the semifinals. We made a good run. I was a little off on my reaction time and V. paired the fastest run of the round with a perfect reaction time."

"He slammed the door on me right off the starting line," Coughlin said. "Congrats to him. He's got a really fast racecar this year."

During the first two rounds of eliminations, the JEGS.com Avenger looked like it might be an unstoppable force with Coughlin behind the wheel. Coughlin opened the day with a solid 6.638 at 206.86 mph to Brogdon's 6.676 at 206.20 mph.

The day became challenging for the JEGS.com crew after the morning's overcast and cool skies burned off to a sunny and hot Labor Day afternoon.

"The weather was changing pretty quickly," Coughlin said. "That's what it's all about. You've got to be ready to adapt to anything that's in front of you. Our team did a really nice job this weekend. They were a little disappointed we weren't running faster speeds, but the ETs were still pretty handsome.

"Last time I checked we race on ET and not speed, so I wasn't discouraged the mph was down. I told them, 'Let's keep those ETs flowing well and we'll be in good shape.'"

To keep those low numbers on the board, Coughlin said the team is wasting no time gathering data for the start of the Countdown in two weeks.

"The team is going to test in Charlotte on Wednesday and Thursday," he said. "I'm not sure if I'm going to be able to get down there myself, but A.J. said he'd shoe my ride, which is good.

The Sept. 13-15 NHRA Carolina Nationals will kick off the NHRA's playoff Countdown from zMax Dragway.  Coughlin will start the postseason seeded third.