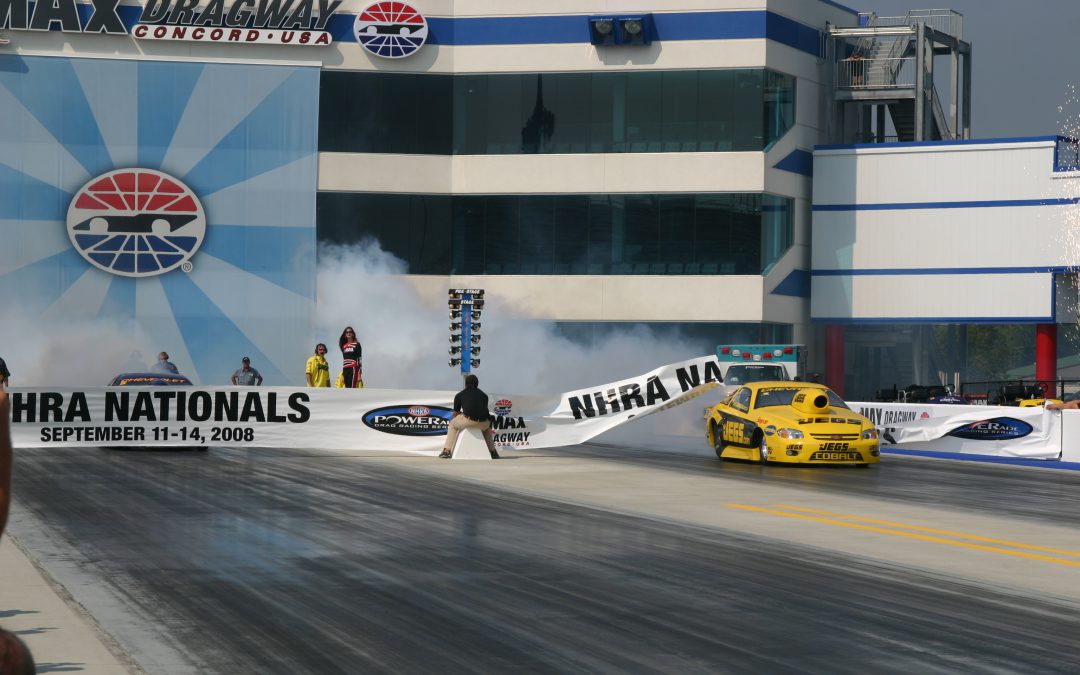 DELAWARE, Ohio (May 7) — Arguably the nicest drag strip in the world, zMAX Dragway opened with great fanfare and four-wide competition in 2008. But before the rabid motorsports fans of the greater Charlotte area filled the massive grandstands for the first national event, something they've done with great fervor ever since, six-time champion Jeg Coughlin Jr. was given the chance to break-in the new facility on a few different occasions.

"We actually had three separate events, all of them unique and memorable in their own way, to christen zMax," said Coughlin, who will make his final appearance at zMAX as a full-time competitor this fall. "The first one was pretty wild because at the time there really wasn't much more than an open field and Bruton Smith's vision of what he wanted to build there.

"I was invited, along with John and Ashley Force, and Mike Neff, to do the first ribbon-cutting of sorts. We were out in this field with Bruton and the late Jeff Byrd, his son Christian Byrd, the track's GM, a bunch of media folks, and a couple of giant earthmovers. They had marked out the quarter-mile and they wanted us to race these earthmovers to the finish line for a photo op. Mike and I were in one and John and Ashley were in the other.

"Earthmovers aren't exactly built for drag racing and Neff, who was driving ours, asked me what he should do as we were pulling up to the 'starting line.' I said, 'Mash the gas to the floor,' which he did and the thing barely moved. So we quickly decided as we were staging to hold the brake, spool it up as much as possible, and when they dropped the flag, let go of the brake. It worked and we shot way ahead of John and Ashley and rumbled all the way down for the first ever win. It was quite a site and a lot of fun."

Less than a year later, with an actual drag strip of perfect concrete laid-out in front of him, Coughlin returned for another ribbon-cutting, this time alongside former teammate Dave Connolly, with the duo driving their actual Pro Stock racecars.

"It was about six weeks before the first race and I vividly remember looking down the strip and seeing nothing but white," Coughlin said. "There was no rubber at all laid down so Dave and I truly put the first burnouts down right through this giant ribbon. Boy, that place sure was a sight to behold. Definitely better than anything I had ever seen. A big moment for drag racing as a sport."

With their Victor Cagnazzi Racing team located in nearby Mooresville, Coughlin was invited back for another prerace event where local NASCAR and NHRA drivers were invited for a "run what you brung" night.

"I had just outfitted my Chevy II wagon with street tires for the Woodward Cruise up in Michigan so I brought that out because the one rule was you had to run DOT tires," Coughlin said. "It's a nine-second car so although there were all manner of hot rods and exotics, we had everyone covered. The neat thing with the wagon is it has a passenger seat so I was able to give several media members and some of our NASCAR friends rides down the strip. I played it safe and kept it in the low 10s.

"It's an honor to have played a small part in opening that track. It's one of my all-time favorites. All of Bruton's tracks are really nice and zMAX is right up at the top."