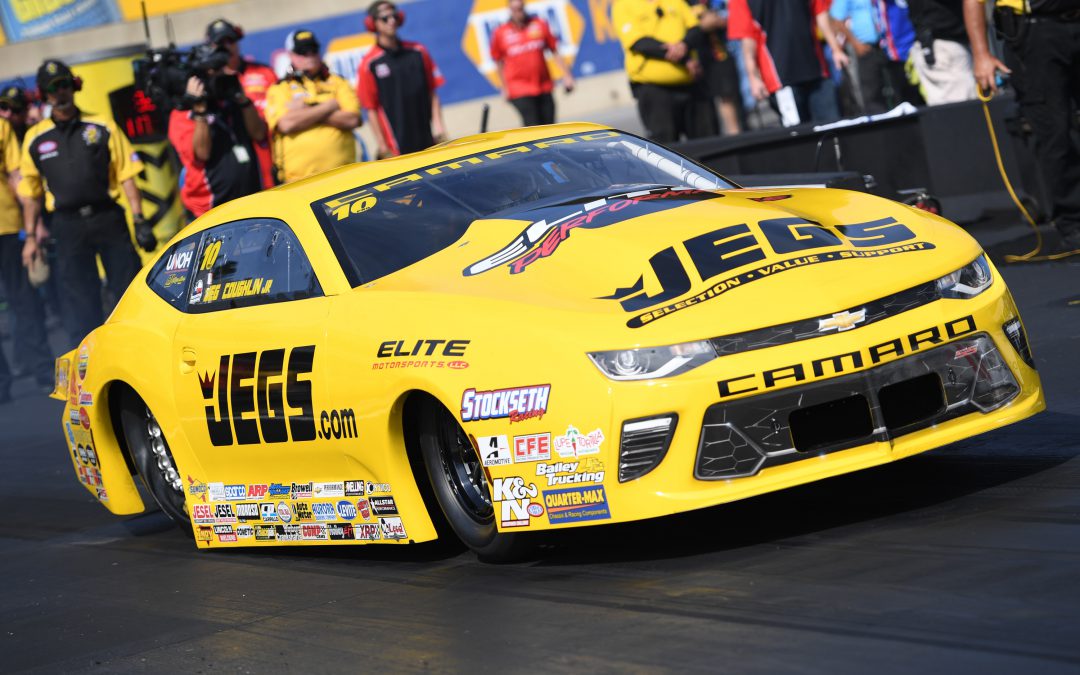 READING, Pa. (Sept. 23) – Five-time world champion Jeg Coughlin Jr. got quicker in each of Saturday's qualifying sessions for the 33rd annual Dodge NHRA Nationals at Maple Grove Raceway, finally finishing the time trials portion of the race hanging on the No. 12 rung on the race day ladder.

In the end, the 76-time national event winner topped out at 6.608 seconds and 209.79 mph in his JEGS.com/Elite Performance Chevrolet Camaro, which places him opposite Drew Skillman on the sudden-death elimination grid.

"Last weekend in Charlotte we ran pretty well in the first couple of days but then slowed up a little bit on Sunday," Coughlin said. "We examined everything and felt confident we had learned what happened and how to correct the issue. What we did even proved out in testing (on Monday), where we were a bit quicker than we'd been during the race.

"Then we load up and come here and this time we struggled on Friday. The guys kinda hit rewind on some things we tested and we ended up making two pretty good runs today, posting a 6.614 and a 6.608. Neither run was letter perfect, by any stretch, but certainly improvements over what we'd done Friday."

Saturday's upward tick gave Coughlin and crew a lot of hope heading into race day at the second of six Countdown to the Championship
playoff events.

"We were about three hundredths behind the quickest car in both sessions today and that's a helluva a lot closer than we were yesterday," Coughlin said. "I feel like we will be even closer tomorrow with the data we gained today. There is hope. I've just got to get out there and drive well, drive aggressive and the guys need to make all the right calls here in the pits for us to turn on some win lights tomorrow."

"Being from (Delaware) Ohio, Reading was a race me and my brothers would frequent, both as kids helping out my dad when he was racing, and then later as Sportsman racers ourselves when we first started drag racing," Coughlin said. "I went on to have great success in Pro Stock here also, so it's a place I truly enjoy.

"I'd really like for things to fall into place tomorrow. This Elite team has worked incredibly hard this year and it would be a nice feather in their caps to walk out of a race with the trophy before the year is over. I'd be thrilled if it happened here."