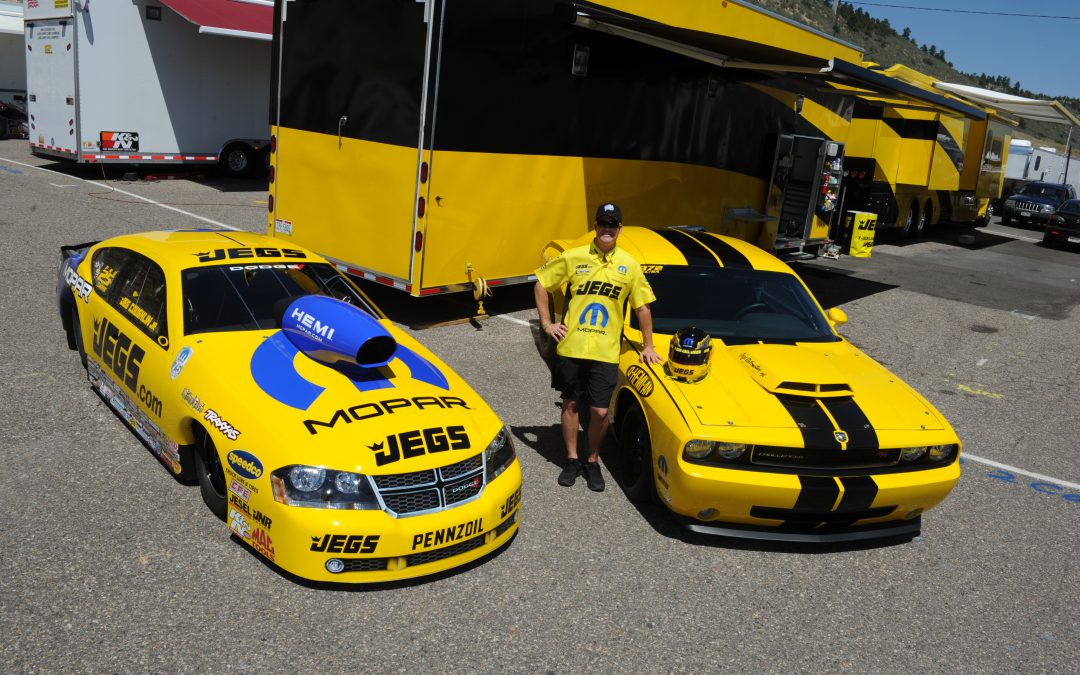 DENVER (July 22) – Jeg Coughlin Jr. made some serious gains on the mountain at this year’s 33rd annual Mopar Mile-High NHRA Nationals on Sunday in both the Pro Stock and Stock Eliminator classes.

In Pro Stock, Coughlin and the JEGS/Mopar Dodge Avenger lost a competitive race to Greg Anderson in the first round of eliminations. In Stock, Coughlin and his JEGS.com Dodge Challenger reached the semifinals before falling to Colorado native Stephen Hagberg.

Early in the day in the Pro Stock race, Anderson’s car had a slight edge at the start and Coughlin didn’t have quite enough power to catch up at the top end.

“It’s a different breed up here at Bandimere Speedway as far as tune-ups and stuff go,” Coughlin said. “We were just a couple of rounds behind. We did pick up. It was a much cleaner run and it felt like a much better run.”

“There’s still a lot of opportunity to get the car a lot more efficient,” Coughlin said. “Greg put down a nice package as far as reaction time and ET, and it would have been tough to beat him anyway.”

In Stock Eliminator, the JEGS.com Challenger picked up quite a bit every round as he made his way through three rounds of eliminations before matching up with Hagberg.

“We came up here from sea level and didn’t change anything in that car but the rear gear,” Coughlin said. “We were hoping we wouldn’t run into anybody in our own class – and by that I mean it becomes just like Pro Stock, first one to the finish line is a winner.

“We made it through a couple of rounds and ran into a local who was really fast. We did all we could to get the car tuned up. When we started the weekend, we were .3 seconds off his pace and by the end of the weekend; we closed that up to less than a tenth of a second.”

Both drivers had an identical 11.27 second dial-in and Coughlin enjoyed a solid advantage in reaction time. Hagberg wound up hitting the finish line first with a pass of 10.455 seconds at 126.91 mph with Coughlin crossing in 11.141 seconds at 96.94 mph.

Up next for Coughlin and the JEGS/Mopar Dodge Avenger is the July 27-29 NHRA Sonoma Nationals in Sonoma, Calif.

“Our last three races at sea level have been a lot stronger,” Coughlin said. “We were in that top eight range with the rest of the pack. We’re looking forward to picking it back up in Sonoma.”