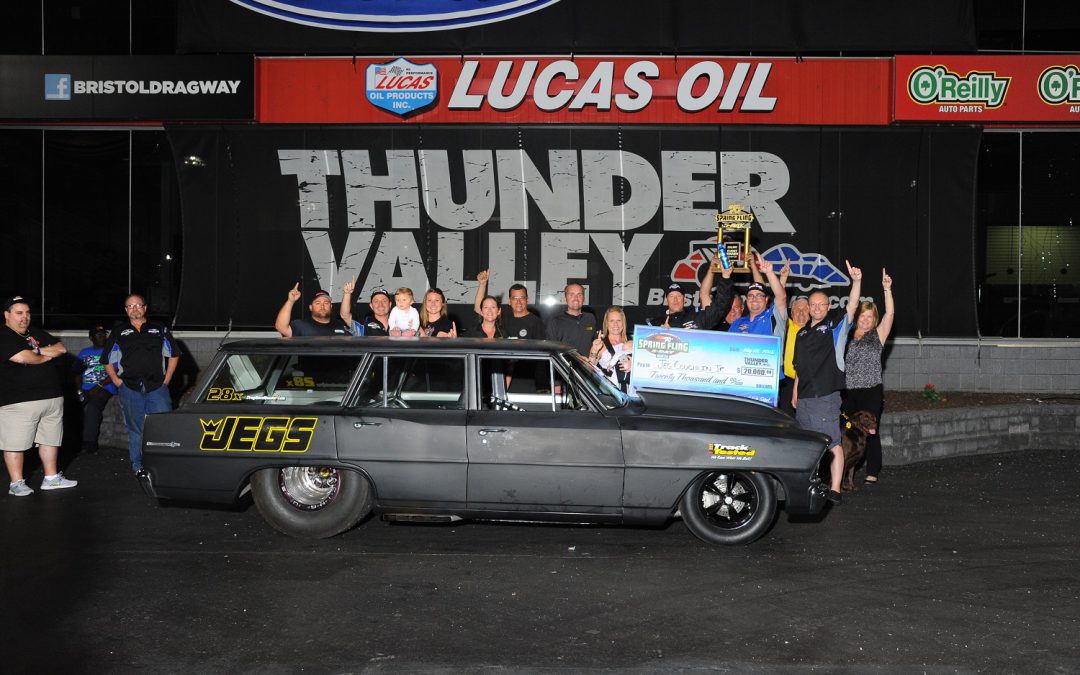 BRISTOL, Tenn. (May 18) — Jeg Coughlin Jr. has won six NHRA championships and countless NHRA and top-flight bracket races in his brilliant career, but chances are good his victory Friday in the K&N Spring Fling 5 Day event at Bristol Dragway ranks among the most memorable.

That victory propelled the JEGS.com driver into a tie in the points standings over the five days of racing, and though Coughlin dropped a run-off race for the points title, he left Bristol with a trophy and a big check.

"They're the pinnacle of today's big-money bracket races," Coughlin said. "The promoters, Kyle Seipel and Pete Biondo, do a real nice job, and I had high hopes to win one of their races in my career because of the sheer prestige. I've been fortunate to win a lot of great races over the years in both the NHRA and the bracket-racing worlds, and to get to Bristol and have that kind of success was really nice."

Spring Fling events, organized by veteran bracket racers Seipel and Biondo, brings together nearly 400 of the best bracket racers in the country. Each of the five days is a single race, with nine to 10 rounds of racing determining the winner.

Coughlin brought two cars to the Bristol Spring Fling, a JEGS.com Chevy II wagon and a JEGS.com dragster. The Chevy II has been a consistent car for Coughlin, but Wednesday it began to drop off elapsed time.

Puzzled, Coughlin and team mechanic Randy Bishop began to work. With help from veteran racers and friends Kenny Underwood and Jeff Maggert and father-in-law Al Kenny, they spent long hours trying to diagnose the problems, but it still wasn't right the next day.

"We ended up working again to midnight, 1 o'clock," Coughlin said. "We changed transmissions and had some trouble there, and we were fortunate to have FTI help us to fix the transmission I'd been running and put it in Friday morning. We barely made first round."

After a long thrash, Coughlin was in the final pair of cars down the track in the first round, and he was fortunate to be there.

"The Friday race almost didn't happen," Coughlin said. "We weren't really planning on making the Friday race with the wagon, and as things would go, we got a couple of really good races to start the day and it grew from there."

The car was performing better, and Coughlin was able to zero in on his dial-in. Meanwhile, he kept winning rounds. His round-best reaction time in the seventh round earned him a bye to the semifinals of the 10-round race.

His semifinal opponent, Don Tipton, had a wire come off the transbrake button and essentially lost control of the on-board electronics and had trouble staging, giving Coughlin a win to the final. There, against multi-time bracket champ Tracey Guffey, luck fell Coughlin's way again. Guffey's transmission must have been too hot, and when he staged the car and set the transbrake, the car backed out of the beams, so he had a nearly impossible time staging his car. When Coughlin left with a green light, the race was essentially his as Guffey was launching in second gear.

"It was very challenging getting started the first couple rounds, and it was odd coming down the stretch with my opponents having trouble," Coughlin said. "To be able to hoist the $20,000 check and the coveted Spring Fling custom trophy was enough reward for all of our hard work.

"With all we'd been through the previous two nights and that morning, it was quite a thrill. I feel privileged to have been able to win this race."

The wagon performed well enough throughout the week to tie Tommy Cable for the points lead after Sunday's event. Cable, though, was able to inch out a run-off win to clinch the points win.

Coughlin's dragster ran well, too, reaching the fifth round twice and the third round twice in the five races.

"We were making some noise, and the car was running extremely well," Coughlin said. "But for some reason the wagon was the one turning the win lights on."

Coughlin made 43 runs between the two rides over the course of the event.